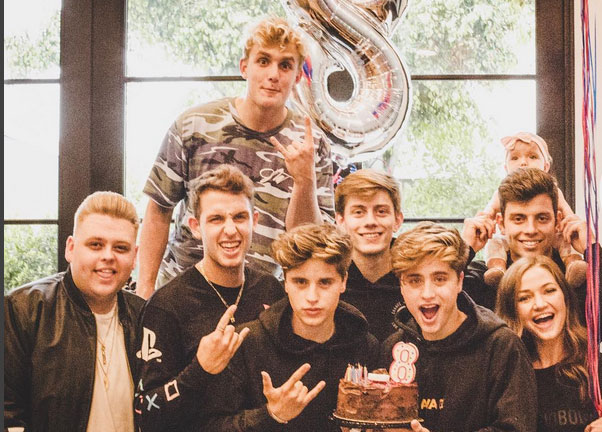 Bad rappers are not rare.  They are out there, spitting lame rhymes, repping awkward flows that go nowhere and say nothing.  A lot of times, the worst rappers are kids or teenagers, like good ol’ Raindrop if you remember him at all from YouTube.  Here he is in all his rap battle glory… 🙂

When it comes to rap groups, specifically as in a bunch of bad rappers banded together to suck ass, there’s a wide selection of those to choose from as well from over the years.  Now, have you ever wondered – who is the worst rap group ever of all time?  So did I, so I looked into it.

Of course, “worst” depends on your definition of what that means, but I’ll throw a few names out at you and see if they stick.

For example, there’s pseudo rap group Crazy Town, that group from the late 1990’s that wrote the mostly-rapped song “Butterfly”. The song was picked up by alternative rock radio and featured some rather bland rap verses from Shifty Shellshock.  I don’t think it was picked up on hip hop stations though…

The problem is the “worst rap group ever” tag doesn’t really stick with these boys, because, for one thing, they’re not really a rap group.  They’re more of a nu metal / rock band.  Also, this song only half sucks.  The backing music ain’t half bad, which was written by Flea and John Frusciante of the Red Hot Chili Peppers.  After hearing the sweet RHCP track “Pretty Little Ditty”, Crazy Town sampled the song, eg. airlifted it wholesale over into their song so they could rap over it.  This song was a surprise smash from the new band at the time.  I hope John and Flea got paid a little something for that band ruining their song’s integrity, assuming they gave permission to the band for using it.  As for the rapping itself in Butterfly, it’s pretty basic – nothing to write home about. That said, I can’t rightly call this band the worst rap group of all time, although I desperately want to.

Next I want to nominate Will Smith, Dru Hill, Kool Mo Dee for the award of most terrible rap group of all time, with their over the top mega rap hit, Wild Wild West.

Of course, everyone loves Will Smith.  He’s a beloved part of American pop culture known for his early years of Slick Rick-inspired narrative raps from the ’80’s where he raps about parents just not understanding, and Freddy Krueger.  Soon after, the world saw Will become the loveable Fresh Prince of Bel Air, with everyone’s favorite theme song.  Will Smith’s resume for being an affable dude goes on and on, as he starred in more big movies, and gave birth to Gettin’ Jiggy With It.

In 1999, the year Prince predicted as “over, oops, out of time” for our planet, the shit hit the fan and Will Smith finally jumped the shark, teaming up with Dru Hill and Kool Mo Dee to bring us Wild Wild West.  The song is essentially a piece of shit, but luckily it’s a light-hearted one, so I guess I’ve got to cut it some slack.  That said, the trio of Will Smith, Dru Hill, and Kool Mo Dee somehow combined to suck as much as possible for this track.  But, like a turd sailing through the air and into a lake, their time together was so brief, I must excuse them from being the recipient of the award for worst rap group of all time ever.

The Bloodhound Gang, were a “gang”, strictly speaking, but since a gang is a group, I want to suggest that they now be hoisted up above the rest as the shittiest rap group in the history of mankind.  In their why-is-this-song-popular mega hit, “The Bad Touch”, we hear lots of rapping, and so that, in effect, makes them a rap group.

While this song is technically a rap song, it’s more of a really bad pop song with monotone vocals spoken quickly that, for some reason, people seem to like.  I never really understood why people took to this track, but it definitely put The Bloodhound Gang in the spotlight where they (did not) belong.

I will admit, I mostly wanted The Bloodhound Gang on this list because this song is so awful, but, truth be told, they are not a rap group, just a terrible pop / rock band.  So, they have no real place here – get them out of here right now!

I know what you must be thinking.  This is it.  Jake Paul and Team 10 are simply the worst thing ever, so we have now arrived at the worst rap group of all time.  After all, they’ve got what it takes to be the worst, don’t they?  That “Disney channel flow”, the are-you-kidding-me rap lyrics, the super-cringe levels of arrogance, the mystifying levels of popularity.  It’s all there.

Clearly, no self-respecting person would actually listen to Jake Paul, but, I happen to know there’s a lot of people out there who lack self-respect, which might explain why this video has so many views.  Of course, it has a really healthy level of dislikes, which is another reason we are reaching for the crown to place it on all ten of their heads (with an extra big McDick’s crown for Jake).

You won’t believe this, but NEWSFLASH – this just in!  A rap group has been found that basically is worse than all of the above groups. So, move along child rappers, pre-teen rappers, joke bands, metal bands that include rapping, Aerosmith’s Steven Tyler, and Jake Paul. The award goes to…

Try Hardz are a Canadian rap group consisting of two guys – J.K., Y.C., and their “owner”, Randiddleydoodley (a dog). 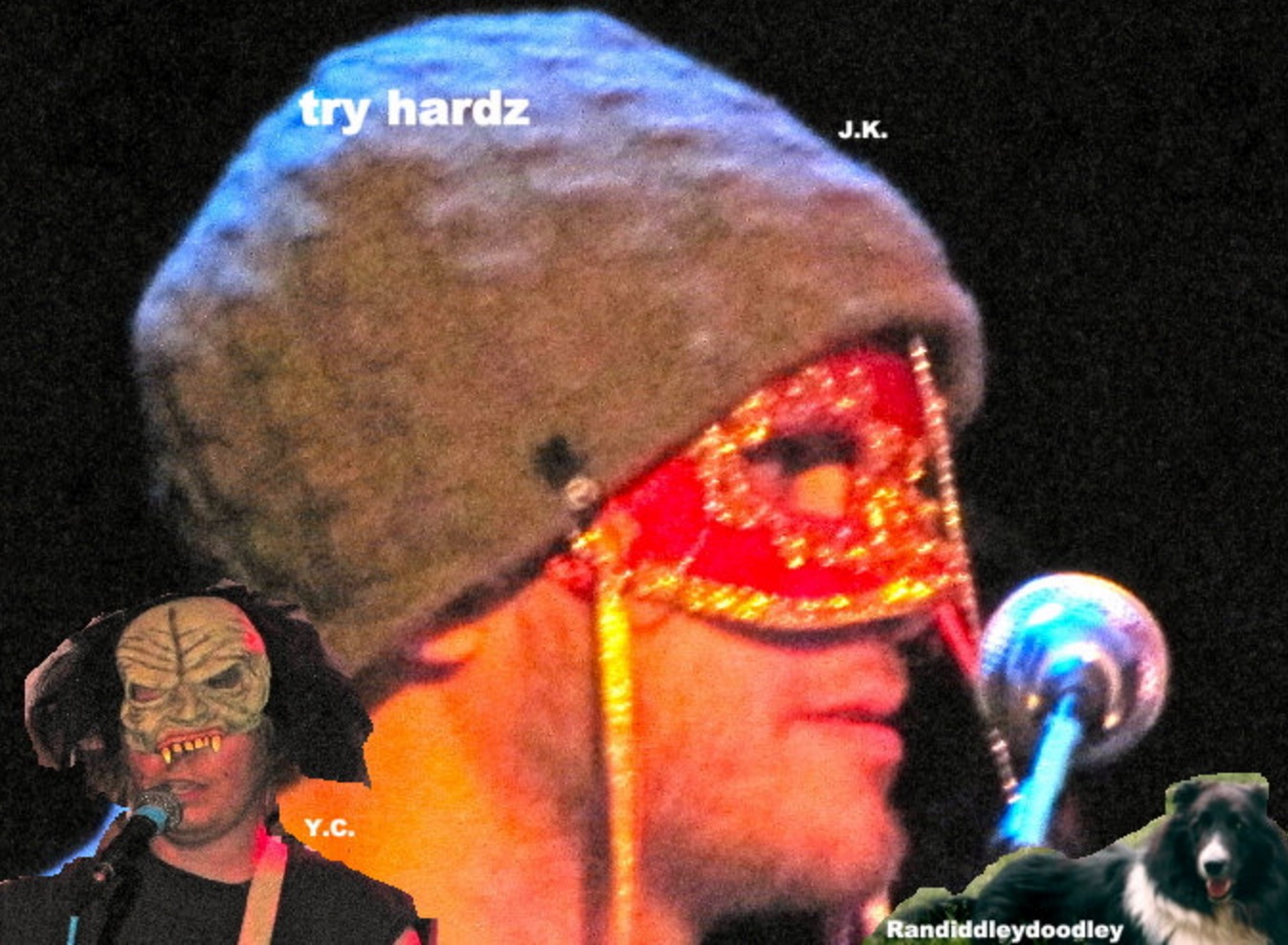 The Try Hardz are definitely weird, and their raps are most heinous and dumb.  They claim to be from another solar system, like the group Gwar.  Perfect.  They also claim to worship the “Three Kings” – Bruce Willis, Brad Pitt, and Alec Baldwin.  Whatever that’s supposed to mean!

Here is a video by the band for a song called “Gordo Surfaces Keppler 22-B Forever”.  Pretty weird, and not in a good way.

Try Hardz have a number of shitty “rap” albums that they have posted on a errant Bandcamp account, none of which we would recommend you listen to (but if you want to torture yourself, here’s the link).

If you want more evidence that this is the worst rap group of all time, here’s a song we dug up from YouTube called “Series: Safe by the … Beach”, featuring general whackness.

We hope you enjoyed our walk down memory lane.  Hip hop music can be so awesome, but only when the artists have real talent.  Luckily, there are so many of those out there, there’s no reason to ever have to listen to the stuff we have listed here above.  Whether you do or do not agree with our ultimate decision, we would love to hear from you, so please leave us a comment down below.