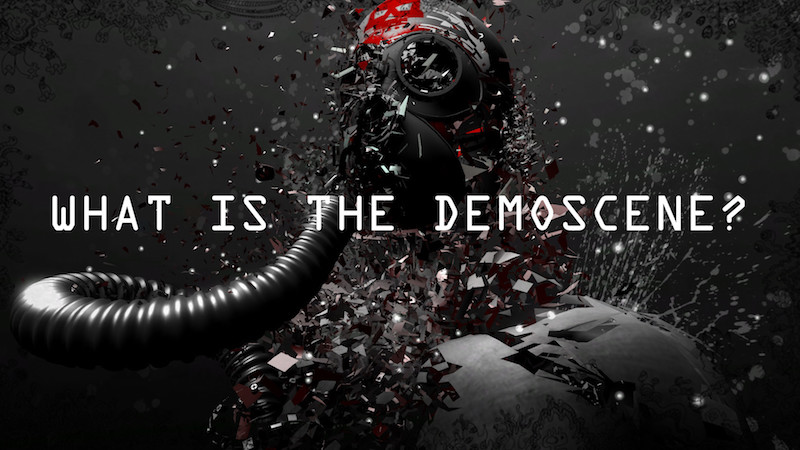 Demoscene may be a word you have not heard before. Reading it or saying it aloud conjures different associations depending on your background or interests.

One may summon thoughts of band demos, promotional, raw versions of songs that the band may send to record labels or event co-ordinators. However, that’s not it at all. It does have something to do with music.

Are you into computers? You may be familiar with game demos, which are promotional versions of a game featuring sneak peeks or tidbits. Demoscene is, in fact, software that has been coded to produce audio-visual artworks.

Demoscene is a genre that sprung up in the very late 1970s/early 1980s as a result of the emergence of computer technology. Coders or “crackers” would hack/crack into games to remove their copyright protection and would add their own visual presentations to the games. These began as introduction screens with plain text listing the crackers.

These were known as signatures, the way a graffiti artist may go around and tag walls with just their name/initials or symbols. It was rather a way of showing off their ability to have cracked the game. Sometimes these intros were more technically advanced than the games themselves.

Eventually coders and viewers lost interest in the games and began making their own stand-alone demos: thus Demoscene was born.

The thrill came from creating things with computers rather than simply playing games on them. Viewers went from passive audience to active creators. 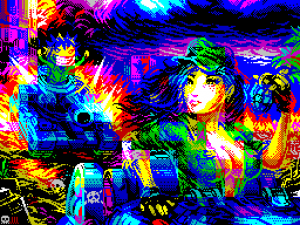 Back then, all computers had basically the same hardware, so any changes made were fully credited to the programmer rather than one computer having better hardware than the next. This bred a very competitive atmosphere, challenging coders to create better effects than their counterparts.

In the early days, demo-making was borne of disbelief at the things computer users would see on the screen. Demo-makers would then play around to show their skill at what they could do with a computer. A large motivator has always been and continues to be the quest to find new and interesting ways of rendering graphics.

It was in 1980 that Atari, Inc., caught onto this new craze and began using a demo, on loop, that gave both visual and audio effects to show off their Atari 400 & 800 computers, which were available in stores.

Five years later, they released a demo for their newest 8-bit computers, which featured a three-dimensional walking robot and flying spaceship set, of course, to music.

It was in 1986 that Demoscene was created: or at least given a name. The original demo groups were 1001 Crew and The Judges, both from Denmark.

Demoscene remains to this day largely European and male-centric. These groups competed in 1986 with highly involved and impressive demos comprised of their own graphics and music. In the late 1980’s, the demo scene began to rise, particularly in Eastern Europe.

Demoscene is largely enjoyed by coders because of its possibilities. It enables coders to follow a system or create abstract works, making it a very popular international computer art subculture. They can – and will – work to get every last bit of performance out of their computer, since they work to produce visual and audio works. They will even extract techniques and effects not intended for the original hardware. The resulting artwork is one that shows one’s ability to program, as well as the visual and musical component. This subculture has a large following online (as you may have surmised), where users share their creations.

Demoscene to this day is mostly competition based, where the artists – whether working individually or within groups – compete to show both artistic and technical skill. Everyone in the scene must follow the implicit rules such as creating entirely original content, making the effort to figure out answers rather than ask for help and to make contacts within the scene. It is subculture that prefers to stay underground without mainstream attention. It is estimated there are about 10 000 participants.

The goal of the demoscene video is to create an experience similar to watching a music video, one that provides entertaining visuals to the sound of pleasing audio music, all entirely generated by software coding. It is also common for coders to work with musicians and graphic artists to create the demo. Most demos are created by a very small number of people.

Essentially the goal is enjoyment from start to finish: coders enjoy the artistic creativity and the technical challenge, while creating a finished product that is both entertaining and pleasing to watch.

So who are these coders? They do not go by their real names so as to avoid the attention of law enforcement, but demoscene is more about self-expression than its origins in cracking copyrighted software. Therefore, their stage names are more about the theatricality than the legality. It should be known that demosceners tend toward legal activity. Individual demosceners will have their own names, and their groups with have a name, so the demosceners will be known as (illustrated example) My Name of Certain Group.

There are often voting parties where difference demos are presented to the public and then the public votes. Traditionally they would have voted for the more technical side of demos but now the emphasis is more on overall impact or mood. Of course the subjectivity of the public is not reliable and so in recent years, Scene.org Awards has gathered a jury of renowned members to vote on the best productions. The scene was more social and casual in the 1980s with demomakers meeting to create and share their software, while the competitive side emerged in the 1990s, taking focus away from illegal activity and putting it into competitions.

Demoparties take place typically over a weekend where demosceners can socialize and partake in competitions, where they design demos all day and then show them at night. Often the visitors bring their own computers, but the party will provide a large space with tables, internet and of course, electricity.

Demosceners typically socialize more than they work on their computers when attending demoparties. These events are most often found in Europe with nearly a party every week, while in the United States, for example, there may only be two or three demoparties per year.

The events typically gather visitors from a single country, with the average attendee list from dozens to hundreds of people. Larger international parties also take place, hosting thousands of people.

Attendees will bring gadgets and decorations to set up at their workspace for the weekend. They will sleep either under their desk or in appointed rooms on air mattresses.

Female attendance at these events makes up less than 20% of the total attendee population; they usually get in for free, which is meant to encourage their participation.

1 thought on “What is the Demoscene?”