If you’ve ever tried to record an instrument with more than one microphone and wondered why the resultant sound is not quite right, you’ve experienced microphone phasing.

First, we’ll talk about microphone phasing and phase cancellation, then we’ll discuss how to avoid it. It can feel incredibly confusing until you break down why it occurs.

Once you understand the way sound waves work and the interaction between the sound waves and your microphone set up, you’ll be able to fix the problem.

Every sound can be broken into waves.

An audio waveform can be further broken down into a collection of simple sine waves of varied frequencies.

When we break the idea of sound or music into its simplest form, the sine wave, we can begin our little phasing discussion.

The sine wave is one single frequency that repeats over and over in a pattern. If you think of it in terms of an actual wave that can make it easier to comprehend. So, this simple wave repeats many times per second.

A 1kHz wave will repeat its form two thousand times per second. Each wave peak and trough lasts 1 millisecond. You can imagine this as a wavy line with the same peaks and valleys in a continuous wave.

When those two waves are melded exactly, the peaks and valleys essentially create a single sine wave. It’ll just increase the volume of the first sine wave.

Delay in the Sine Waves

If one of the two sine waves is delayed by even a millisecond, the peaks and valleys will no longer match.

The sine waves will be considered out of phase, and the volume will be lower. This is called a partial phase cancellation. It can be hard to detect because they’re not phased enough to be severely noticeable.

When the peaks and valleys are exactly the opposite – the peaks of 1 sine wave meets the valleys of the other – that means that the first wave is completely “out of phase” with the second wave.

In fact, the two waves will cancel each other out and produce silence. Sound engineers will often call this being 180 degrees out of phase.

Here’s a brief video tutorial that describes exactly what we’re talking about here. 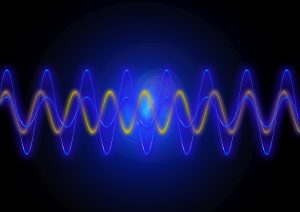 This is where it can get extremely complicated. When dealing with multiple sine waves of differing frequencies, which you will when making music, you’re going to have fading pitches and changes in timbre.

Let’s go back to our example of the 1kHz wave. A delay in the second wave can have a more dramatic impact because there is more than the one wave to consider.

If you have a 1kHz wave, but the second wave is delayed by 0.5 ms, you’re going to have a recording that is out of phase.

On the other hand, if the second wave is 2kHz, it’s going to match perfectly as long as the waves repeat every 0.5 ms.

Delays in the peaks and valleys of the waves can cause cancellation at various frequencies. What does all this mean for the home recording studio, though? 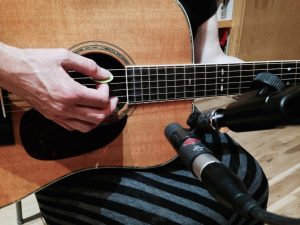 Sound travels a foot every millisecond. You’ll have to understand this to see how that can impact your recordings even if you’re only using one microphone. Imagine you’re using a microphone close to your bass guitar amplifier.

There would be delay of 1.5 ms between the two sounds, which will lead to phase cancellation.

While this is theoretically possible, the timbre and tone of the noise reflected from the floor will change the characteristics of the sound, so that might not happen with a single microphone.

That leads us to a discussion of using two microphones, and that’s where you can run into problems.

Multiple Microphones with a Single Instrument 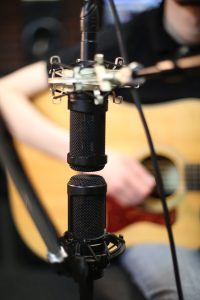 If you want to remove any kind of mic phasing from your recordings, remember that sound travels at the same speed over the same distance. You can simply place the microphones as close together as possible to avoid a delay in the waves.

Sound engineers will often play with the placement of the microphones from the sound source.

They’ll place mics at different distances from the sound source, invert the polarity of the microphones and learn whether the sound is canceled or reinforced based on the delay.

In your home studio, it’s just a matter of playing with the placement of your microphones.

Here’s a quick video featuring producer Kevin Antreassian (Dillinger Escape Plan) who talks about this very issue and shows us what can happen.

Unless you plan on using math to figure out the milliseconds and do a lot of complicated measurements, you can simply move the microphones around until you get the best sound.

Now you should understand the concept behind phasing, and you’ll know that when there’s silence or a low sound in your recordings, it’s due to phasing.