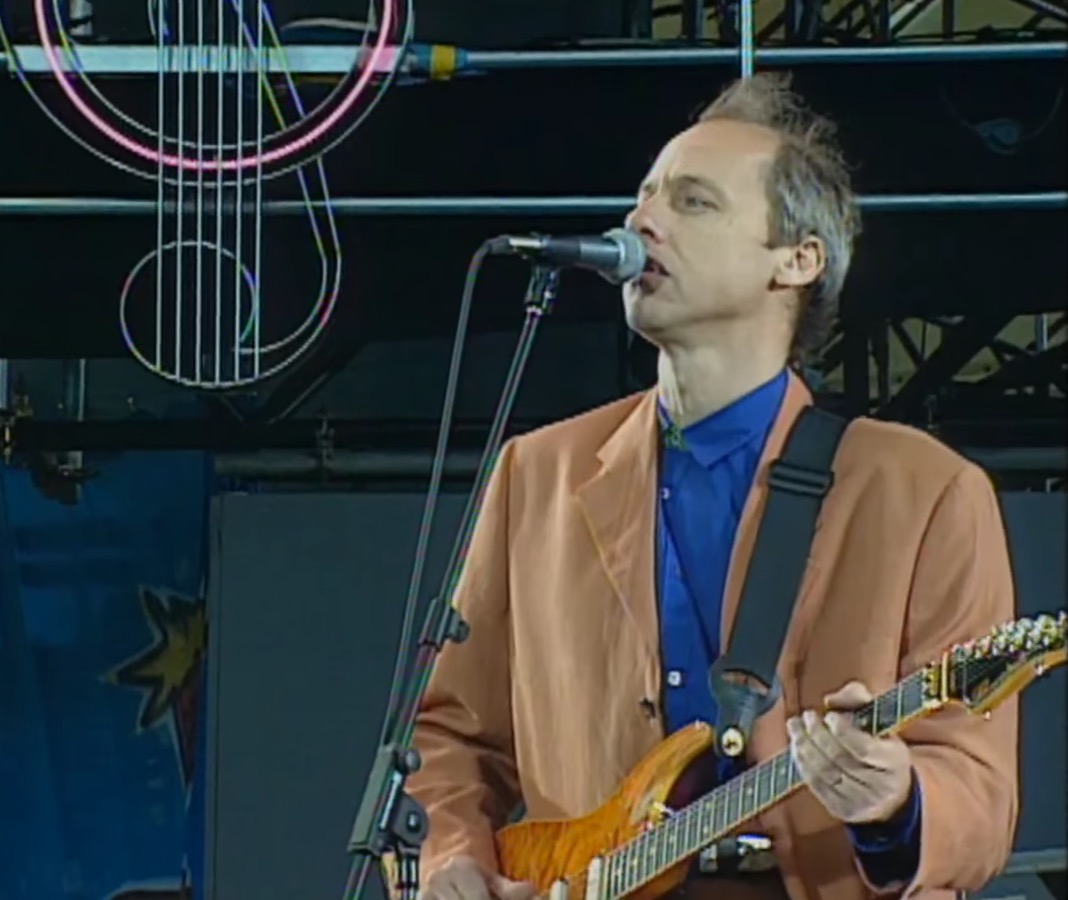 Dire Straits, one of the rare bands who had such a reach around the world without conforming to outside pressures or temporary trends. Their repertoire is full of hits that even those who don’t necessarily listen to rock know.

No matter what some people say, Mark Knopfler is definitely the brains of the whole operation.

His guitar skills, creativity, and voice are all on a level of their own. Aside from having some of the best songs in the history of rock music, this band also has a pretty refined and unique sound. 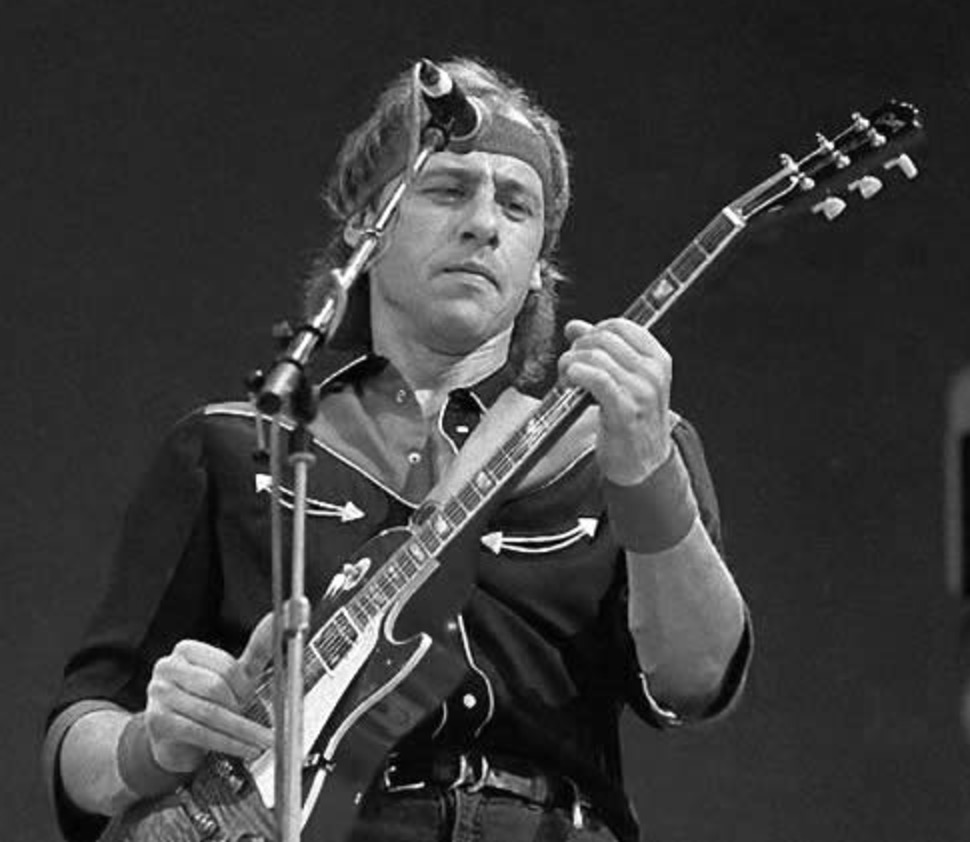 Again, that is in good part thanks to Knopfler, who has been the main driving force behind Dire Straits for decades. Because of that, we are going to take a closer look at Mark Knopfler’s guitar rig now and see what his regular setup consists of.

As you are about to find out, with Knopfler it is all mostly about simplicity. Even so, he has managed to dial in some of the most legendary guitar tones known to man.

Throughout his long career, we’ve mostly heard him with those crystal clear tones through his Fender Stratocasters. However, he’s also been known for his use of Gibson Les Pauls and Schecters, but we’ll get to all that in a few moments.

They say that one’s first guitar is always going to take a very special place on the rack, no matter how crappy it is or how many expensive guitars you get afterward. That is exactly how Knopfler views his first electric guitar.

The model in question is 1962 Hofner Super Solid V2.

He received this one from his father as a gift, which was pretty cheap back in those days. Even though he has reached global fame, Knopfler still has this guitar and is most likely keeping it in a safe and secure place.

We could easily say that he will never play it on stage ever again. Glancing at this old guitar model now, it’s definitely something that looks pretty unconventional at this day and age.

It comes from the early 1960s and features an unusual looking tailpiece and a tremolo bar, two humbucker pickups, one volume and two tone controls, and a weird 3-way pickup selector switch.

Before he became a Schecter guy, Mark was riding the Gibson and Fender train for quite a while. He owns a 1959 Gibson LP Doublecut – a somewhat of a rare model that he sharpened his teeth on in terms of sound. 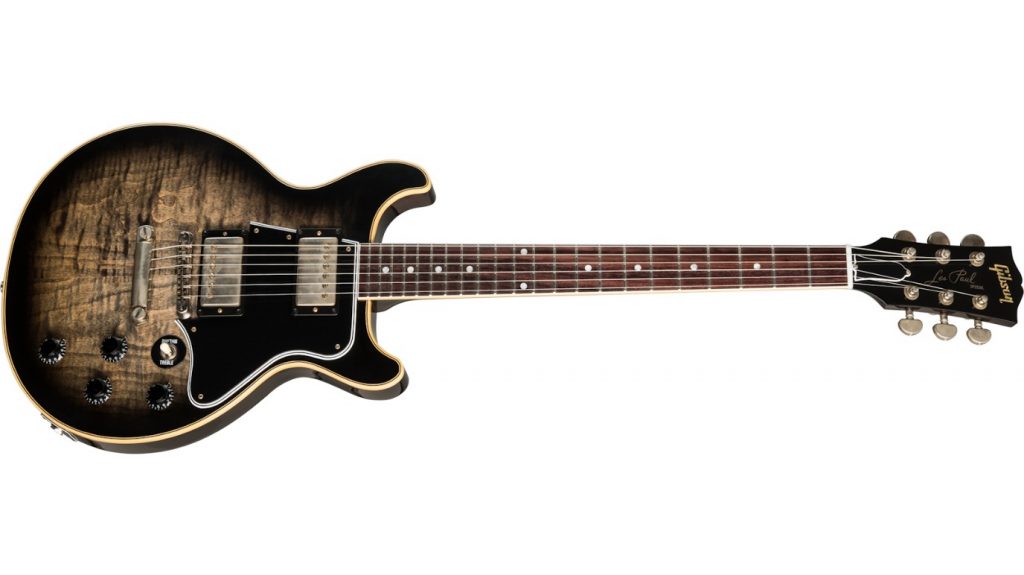 It features two P90 pickups and a simple stop bar as a bridge. The overall features are similar to those old Les Paul Junior and SG Junior guitars.

Afterward, he got a hold of a ’61 Red Stratocaster, which would define the start of his affinity toward Strat style guitars in general. 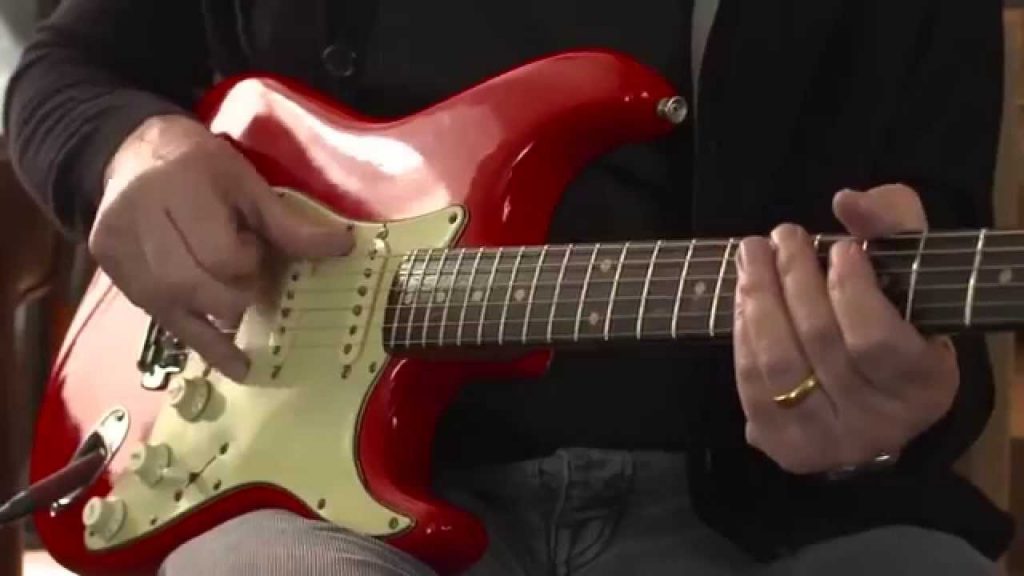 Currently, this specific guitar is probably sitting somewhere next to that Hofner we mentioned above since it’s pretty special to Mark.

Buying it sometime before the recording of Dire Straits’ debut album, this is most likely the instrument we can hear on the band’s legendary song “Sultans of Swing.”

Check out this video where YouTuber Dusty Strings lays into the í59 Gibson Les Paul Special.

Going over to another one of his famous Stratocasters, there was also a red ’62 in his collection.

However, it is rumored that this is actually a Japanese copy. There have been many theories about this instrument over the years and there’s still some mystery of about its origins surrounding it.

Although he’s not known for these models, there have been a ’69 black Fender Telecaster and a white Gibson SG Custom with three pickups, built sometimes in the 1960s.

Now going over to some other of his memorable guitars, the 1980 Schecter Stratocaster in red is another one of his important instruments. 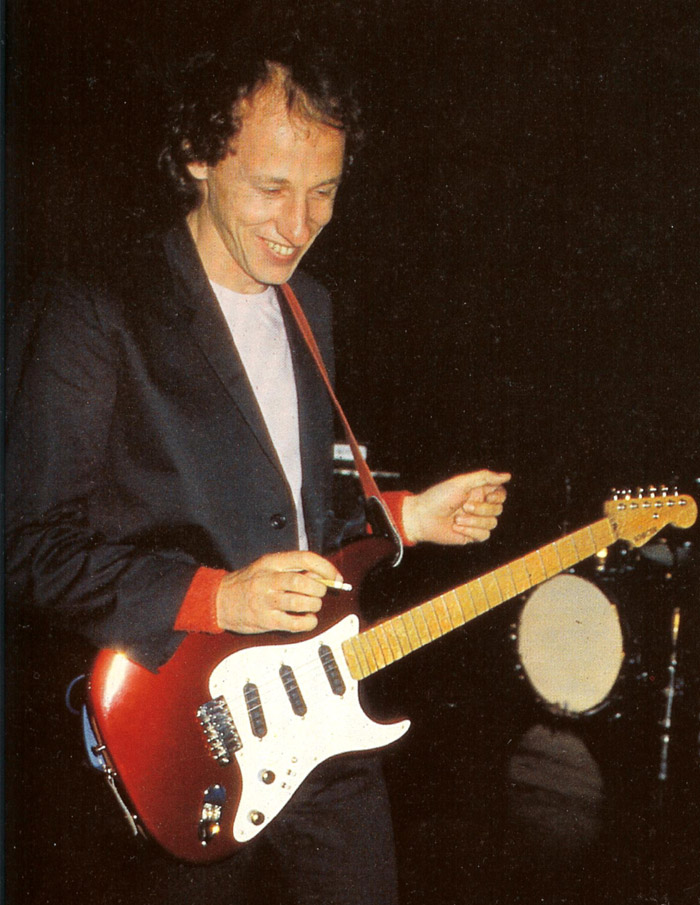 For all the fans of Dire Straits, this is the guitar they probably imagine Mark playing when they think of the most memorable performances. The guitar came with a maple neck and Schecter pickups, which were later replaced with a set of Seymour Duncans.

There’s a 1980 Schecter Strat that he got it in the early ’80s. The guitar was played all the way through the decade, up to the early ’90s.

There have also been some other Schecter guitars in his arsenal, including a 1984 Telecaster that he used on “Cal”, which is the soundtrack to the film of the same name, released in 1984.

After using Schecters for a significant portion of his career, Knopfler later switched over to a mix of Pensa-Suhr, Gibson Les Pauls and Fender Strats.

There have also been other interesting guitars in his collection, like the Steinberger GL2 Standard. However, none of these guitars were as notable as the ones we mentioned above.

But of course, we should not forget about his extensive use of acoustic guitars over the years. National Tricone and ’37 National Duolian Resonator are some of the most interesting instruments in his collection. 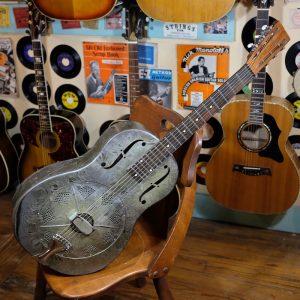 Especially the Duolian Resonator, which he got back in 1978 from Steve Phillips. The two of them actually performed under the name The Duolian String Pickers for a while.

This guitar was also used on Knopfler’s 1982 song “Telegraph Road” as well as his 1980 tune “Romeo and Juliet”.

Mark’s Martin D18, made in the 1930s, stands out as one of his favorite instruments of all time. As Mr. Knopfler explained once, this guitar has its own character and that vintage dry tone. 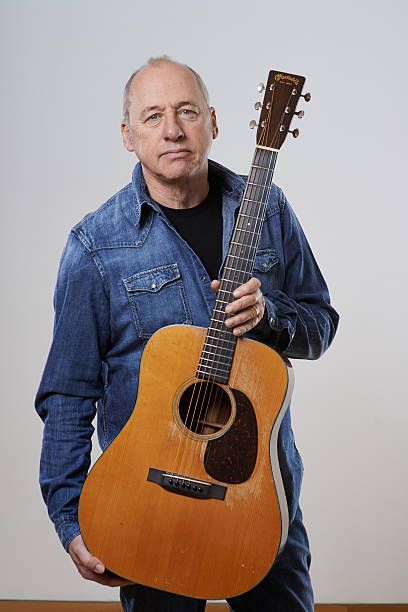 As for the other acoustic guitars, he was mostly focused on Martin and Gibson guitars and he used them on numerous occasions throughout his career.

Mark’s choice of amps is a pretty interesting one. If you’ve listened to more than one album of Dire Straits, you probably have a clear enough picture when it comes to his tone. Interestingly, he used a number of different amps to get all those different types of tone.

Fender Vibrolux comes to mind as the first important amp. It was used for their first album, while it came to foreground the most on the “Sultans of Swing.”

Next amplifier that is worth talking about is the Mesa Boogie Mark II.

This one was Mark’s choice for “Brothers in Arms” album, along with the Marshall JTM45. Speaking of which, that JTM45 is responsible for the crisp tone we heard on the song “Money For Nothing”. 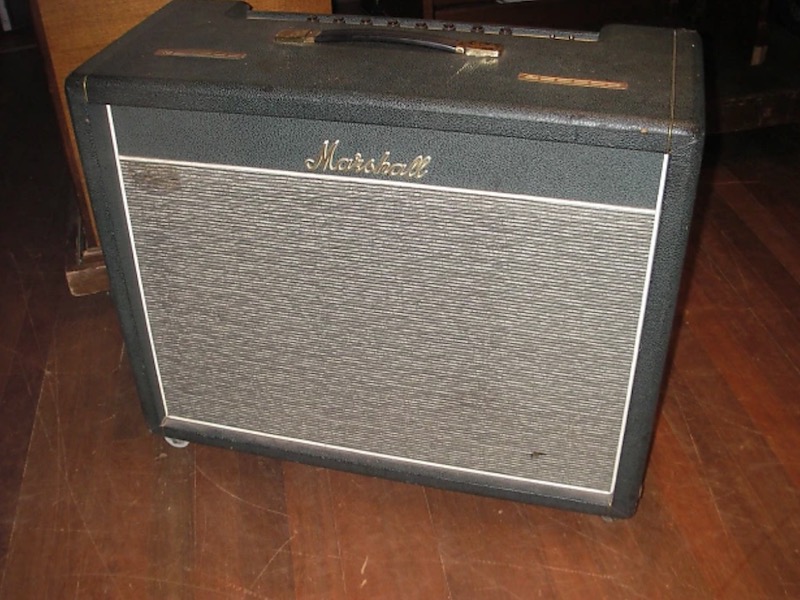 This is, by far, one of the company’s most famous products and one of the most diverse amps. It’s been designed after the legendary Fender Bassman amp model.

Here’s a quick demo of the Mesa Boogie Mark II.

When it comes to his main rig in more recent years, Soldano SLO100 comes up every time. It appears that Knopfler settled down on this model and decided to use it as his foundation.

This 100-watt amp is known for its great sound and great looks. First released back in the late 1980’s, it’s been used by guitar players from softer genres, all the way to crushing heavy metal. 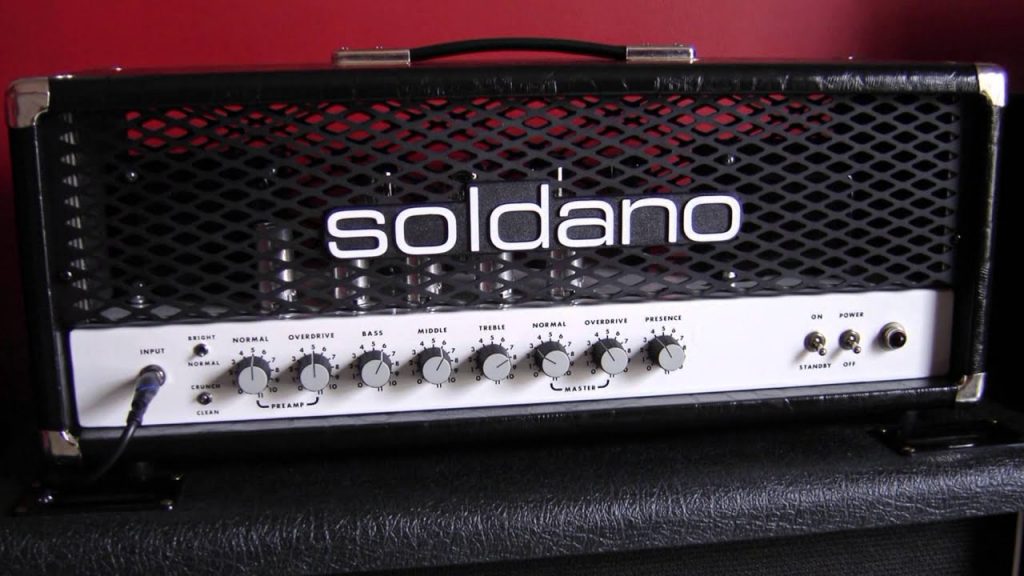 But although Mark started his guitar playing career way back in the 1960s, he’s certainly open to new technology which is rather unusual for musicians of his age. It has been revealed in 2019 that Knopfler got into the world of digital modelling amps.

The amp (or should we say effects processor) in question is Kemper, which has also been praised by many other guitar masters, including Steve Vai.

Although somewhat of an unusual turn of events to witness him play through this, Kemper definitely manages to recreate the tone of various guitar amps, both older and newer ones. 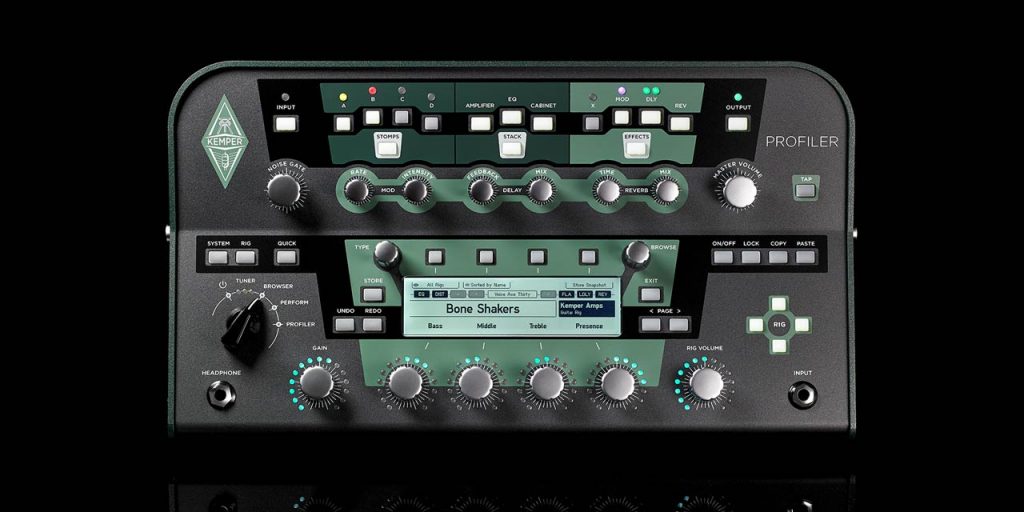 Besides, it is way more practical for taking on those long tours overseas since it’s compact, does not require expensive maintenance, and brings more consistency. And the fact that Mark’s decision to start using it is clearly a proof of Kemper’s greatness.

Some other amps have also been present in his various rigs over the decades, including Crate VC 5212, Fender Super Sonic, Tone King Imperial MKI, Music Man 212-HD, and even Reinhardt Storm 33 which is somewhat rare to find these days. 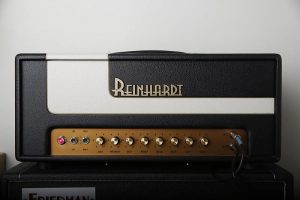 If you know Mark, you probably know that he is not a big fan of effects pedals. In fact, he prefers to let this guy backstage take care of the effects almost completely.

With that said, there are some pedals he has used, which have left a mark on both his tone and understanding of guitar effects in general.

Morley volume pedal was definitely a big part of Mark’s main rig back in the day. He used it for his live performances, and it gave him the edge he needed when racked effects just couldn’t cut it.

These days he hasn’t included this Morley into his setup too many times, but it’s suspected he is still using it for studio work.

Dunlop Cry Baby Wah is another pedal that comes to mind. However, Knopfler didn’t really use it as most other guitar players would. Instead, he fixed the wah in a certain position and played it that way.  This is one of the main secrets behind the tone on “Money for Nothing”.

Playing through his Gibson Les Paul, his Shure SM57 microphones were placed in a particular way by accident, which also contributed to the tone on this well-known song.

Lately, Crowther Audio Hotcake seems to be his dirt of choice. The pedal is a booster/overdrive combo box and a pretty conservative one at that. With that said, Knopfler was seen playing through it on recent tours. 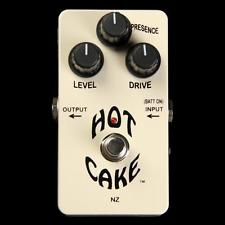 Read our review of the Hot Cake here

One of the more interesting things that are worth mentioning is Knopfler’s affinity towards D’Addario strings. Most of his guitars are stringed with one of their models, or another.

He has chosen D’Addario quite some time ago, and he still prefers them over most other brands on the market. Just how much of an impact this decision had on his tone is hard to determine, but we believe it definitely played a part.

For the most of his electric guitars, he’s been using D’Addario EXL120 which are a 9-42 set. 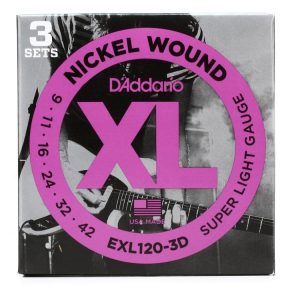 Although he’s clearly a fan of lighter gauge strings, his acoustic guitars mostly feature Dean Markley strings that are 12-53, which are most certainly quite heavier compared to his electric setup.

His National Tricone and National Duolian are somewhat of an exception as he uses D’Addario EJ15/3D 10-47 sets on these two guitars.

And since Mark Knopfler has been, of course, a lead vocalist all throughout his career, he always needed a solid microphone for his work. And for this purpose, Mark has been using a Shure SM58.

This particular microphone is pretty much an industry standard. This is not only due to the sound quality but also due to its ability to withstand rougher handling. As for other microphones, he’s also been seen using Audio Technica AT4055. 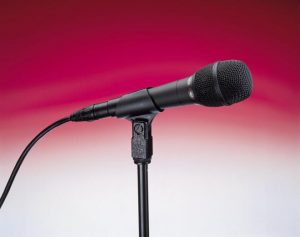 If you were to ask us what single trait makes Knopfler a great artist, we’d say it is his approach to music in general. Mark’s a simple man when it comes to sound.

Give him a good amp, a good guitar and just watch him completely align everything toward a pretty awesome tone. Sure, there’s a decent number of effects in Dire Straits songs, but those are either added by technicians during recording or in the post-production process.

Knopfler himself rarely deals with that, and that is the way he always was. 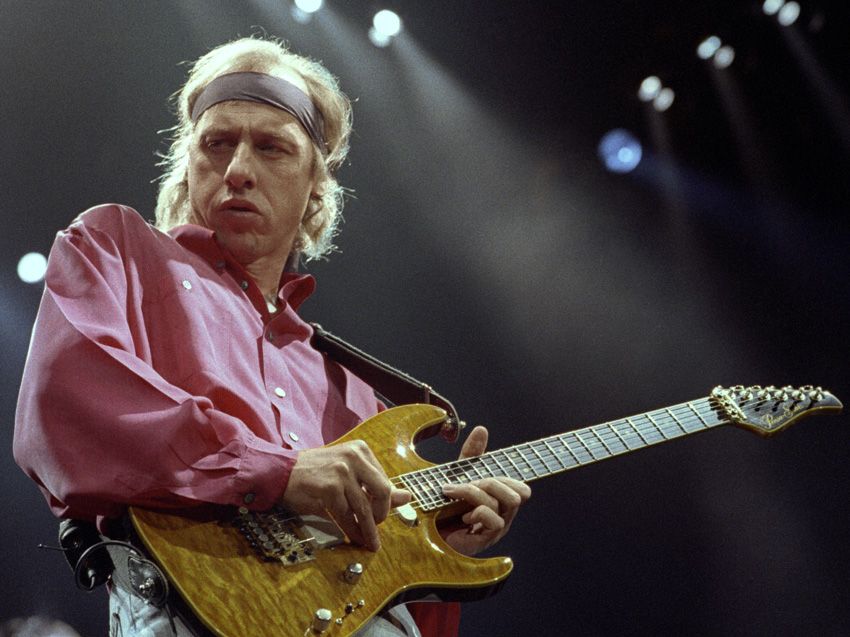 Most of his tone’s character comes from his own ability to make the guitar sing. Mark’s technique and subtle details are the core of Dire Straits’ music. Those who strive to do more with less are definitely going to appreciate his style.

There are certain guitar lovers that like to say that the tone comes from the guitarist and not the gear. Whatever is your take on that, Mark Knopfler could be, in a way, a proof that this saying is true as none other would sound like him through the same rig that he’s using.