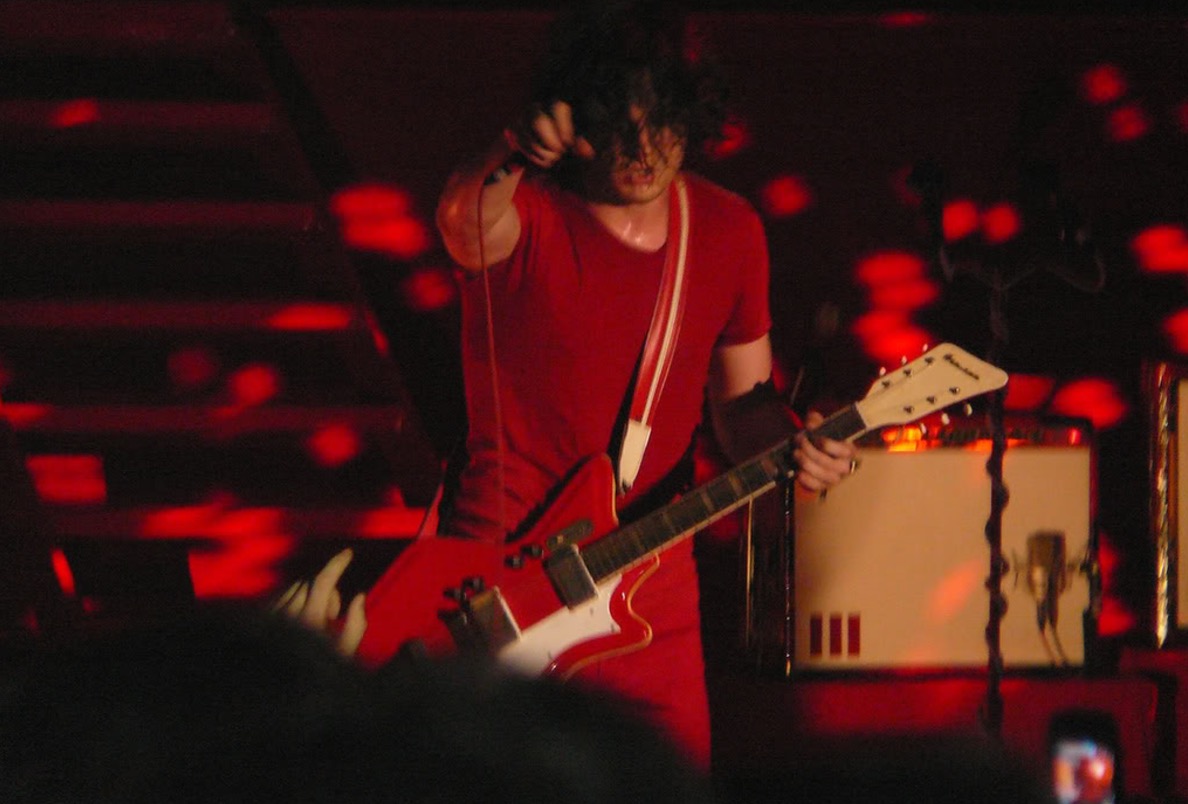 When The White Stripes first appeared, they created a lot of noise on the scene. Aside from their music, the nature of this band attracted a lot of attention.

Jack White and his “sister” Meg showed the world that rock is can be simple and minimalist in terms of how many people it takes to rock out, and how complex the music has to be. 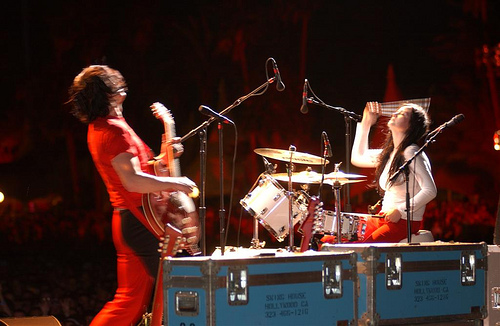 With that said, Jack is a guitar prodigy. Not only is his skill up there with the greats, but his tone is always on point. If you listen to any of their songs, the guitar never feels out of place.

Being able to adjust your tone to the music like that takes some serious know-how.

However, it also takes the right equipment. Reproducing Jack White’s vibe might seem easy from a distance, but that perception quickly changes when you go into details. 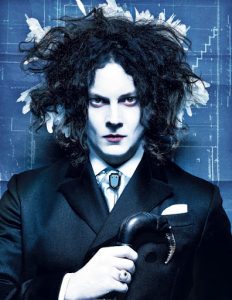 After all, The White Stripes were a duo formation, and Jack managed to keep the tone full, despite being just one guitarist going up against the drums, without any support from the bass whatsoever.

Those who are experienced guitarists know that this is far from an easy task, both from a musical and tone-shaping standpoint.

So in this article, we are going to show you what type of guitars and gear can be found in Jack White’s inventory at any given moment, which should clear up some questions regarding his tone.

After reading this guide, you’ll get a fuller picture and it will be easier for you to find ways on how to reproduce the way that Jack White sounds.

This might not be the easiest task, but it certainly isn’t impossible either. 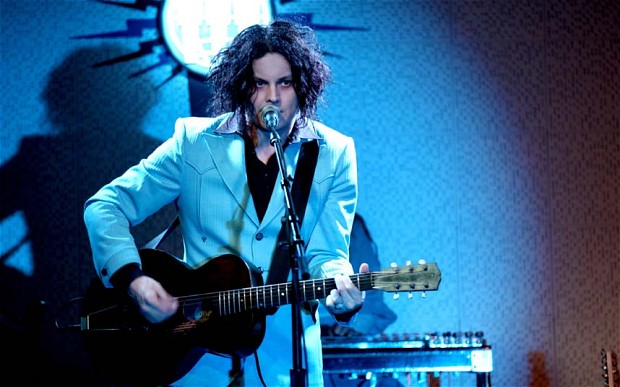 By listening to The White Stripes, Jack White’s solo records, as well as a project like The Raconteurs, it’s not hard to figure out that Jack White has a pretty vintage approach to his music.

What he is creating is the rawest form of rock you can get right now.

With that in mind, it is not a surprise that Jack is a fan of vintage guitars and limited use of effects pedals.

We are going to start this gear overview by checking out his guitars. There’s some pretty exciting stuff to be found in there.

After we’re done with that, we will then move to his effects pedals and amps.

Without too much exaggeration, we can easily say that Jack White’s guitar room looks like a proper guitar museum. He owns some pretty rare models, as well as the good old classics, or just some unusual oddballs. 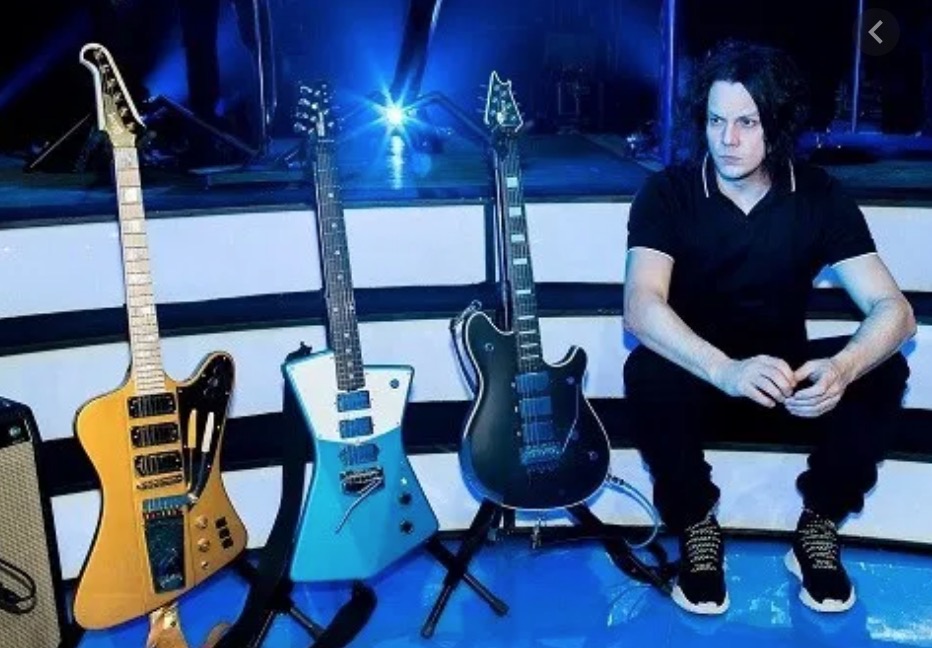 Generally speaking, in terms of brands, you will find Fenders, Gibsons, Gretschs but also more obscure Crestwoods, and Keys.

When it comes to specific models Jack is commonly associated with, his latest guitar of choice is a 1937 Gibson L-1 – a truly rare guitar with a character of its own. 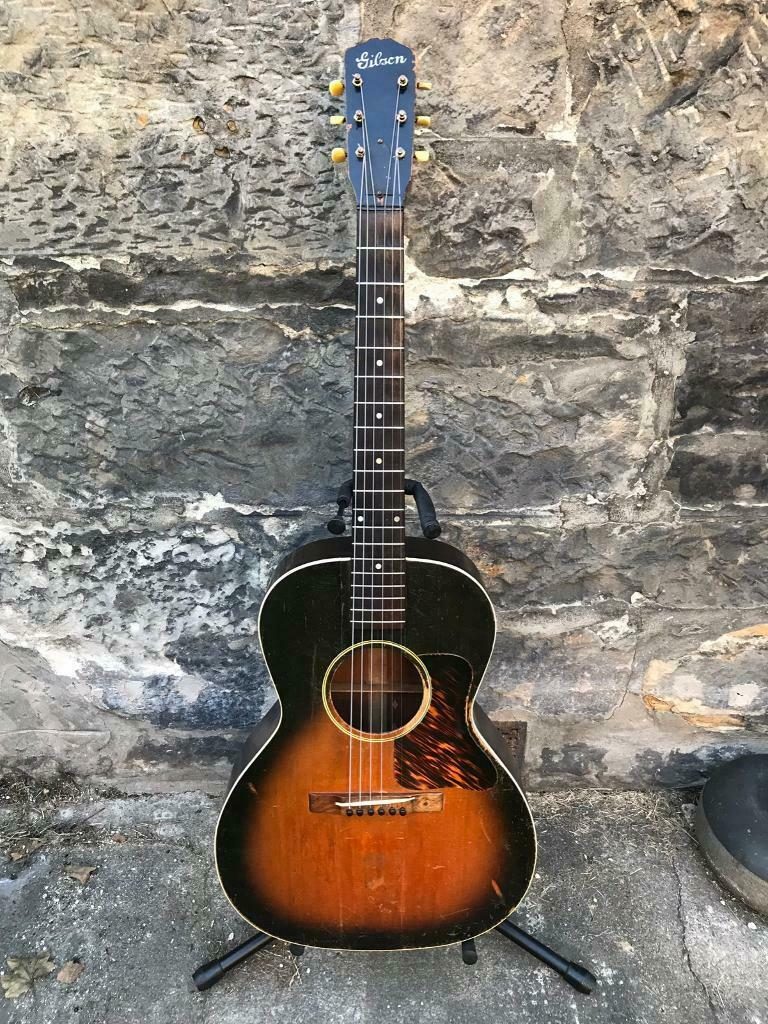 There’s also a Gibson F-4 mandolin in there as well.

Gretsch models which he is fond of include a White Penguin, Triple Jet, one Gretsch Anniversary Jr among others. 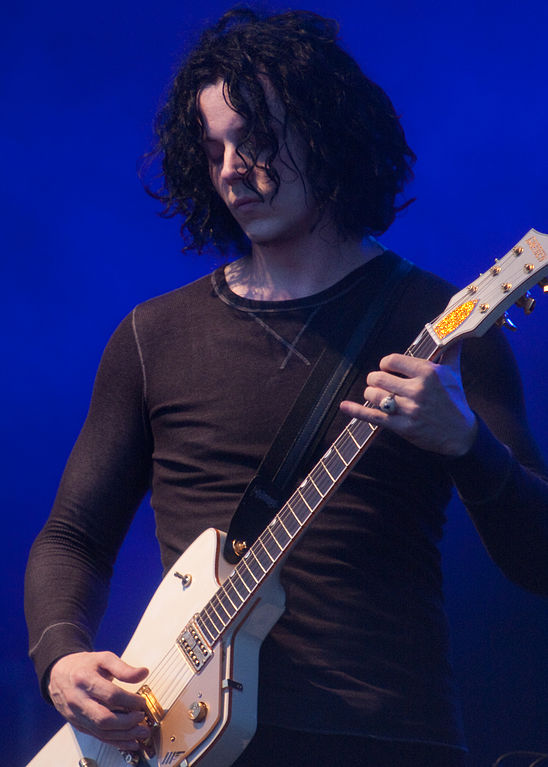 Most of his electric guitars seem to be semi-hollow or hollow-body models, but there are also two Fender Telecasters in there to break up this monotony, both with Bigsby bridges.

For instance, we can also find Fender’s Highway One Telecaster in his collection. Another classic solid body is a Gibson SG Standard, but it’s not something that he uses that often. 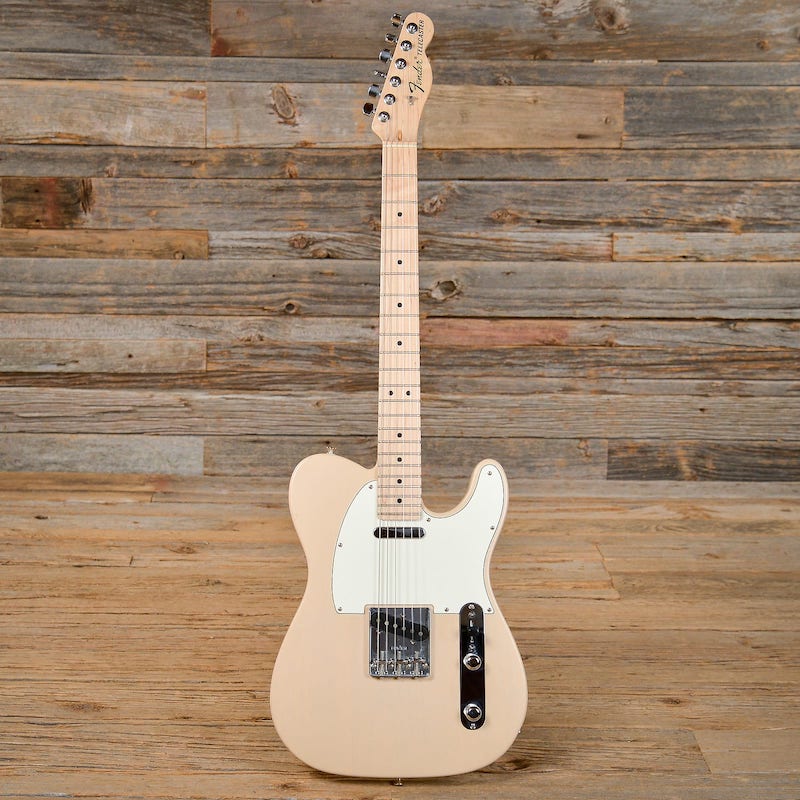 However, in more recent years, he pretty much surprised everyone by getting himself a guitar like EVH Wolfgang USA Signature.

While Jack White is most certainly a capable musician, he doesn’t fall into this particular category, and some guitar lovers found this choice of instrument to be a bit too weird.

Nonetheless, Jack expressed his admiration toward this instrument, most notably due to its ergonomic qualities and tonal versatility.

Going back to his classic vintage and vintage-inspired pieces, we have Harmony Rocket hollow-body guitar that he mostly used during his time in The White Stripes.

Then we have the Danelectro Doubleneck Baritone and Standard guitar, something that goes back to the oldest days of rock music. It’s a somewhat rare and unusual piece.

Arguably the weirdest instrument in his arsenal is the Montgomery Ward Airline 1964 Res-O-Glass guitar. It’s the instrument that he used extensively during his time in The White Stripes, and it was his primary weapon of choice. 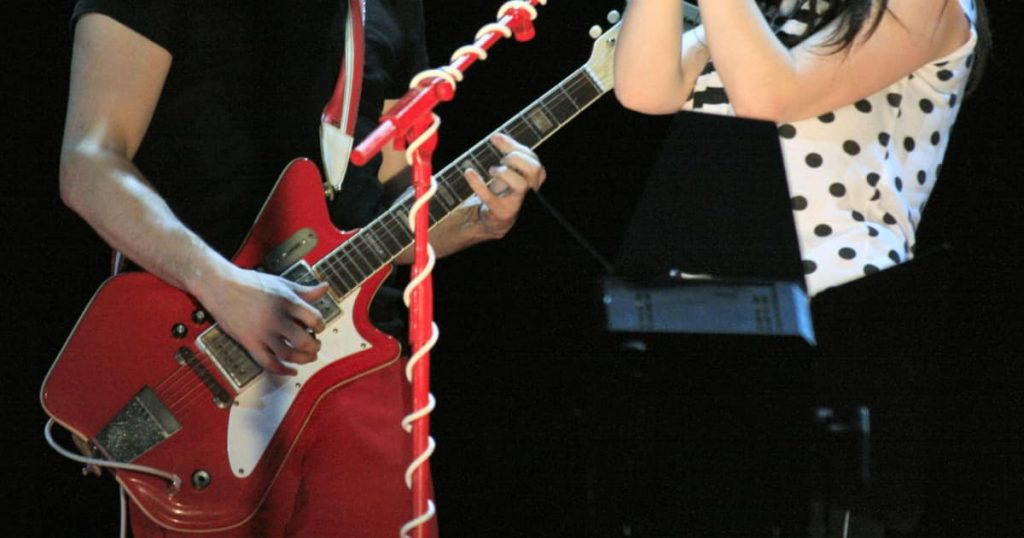 To add to the list of his acoustics, we can also find stuff like Gibson Hummingbird and Gibson J-160 in there.

Anyhow, we could go on for days about all his gear, but these are some of the most notable and interesting instruments that we thought were worth mentioning.

Unlike many other guitar players which have reached the level of popularity like Jack White, his selection of amps is pretty straightforward.

We are talking a 1970s Fender Twin Reverb and a pair of Sears Silvertone 100 Watt combos. He sometimes uses different amps, but this configuration is what his main rig is consisted of. 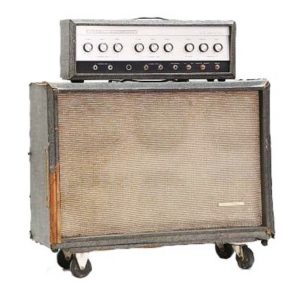 Fender Twin Reverb’s tone is definitely a popular choice these days as it was when this amp first appeared. Jack obviously found what works for him, and follows that logic that you simply shouldn’t fix something that isn’t broken.

Despite the odd decision to use these two amps for most of his work, it is worth noting that the tone he is running is partially influenced by his amps.

On occasion, he also used the legendary Fender Bassman, but that still falls into this old classic vintage Fender category.

Nonetheless, there have been some other interesting pieces that we were able to find in his rig. For instance, a great example comes with the RCA Clubmaster, which is a pretty unusual decades-old amp. 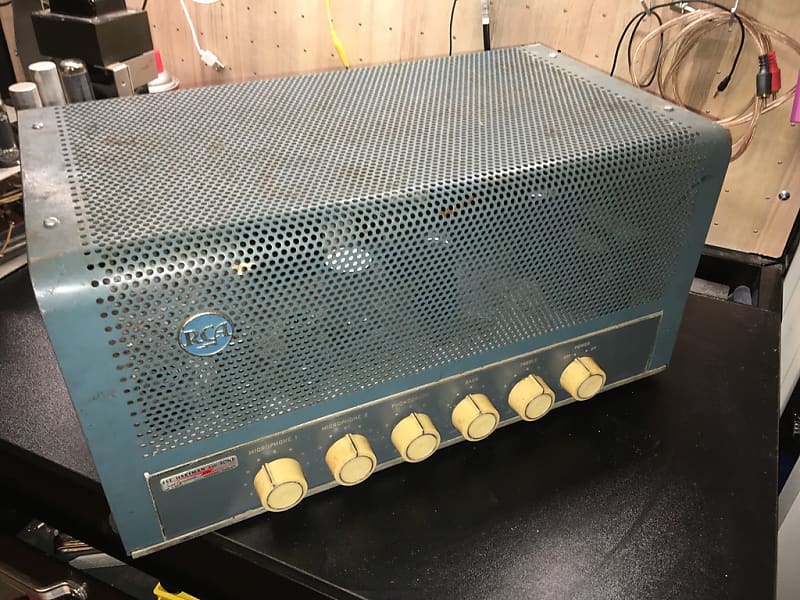 However, this is nothing really that unusual for Jack White, as he’s pretty much known for collecting weird amps and guitars.

Speaking of weird, he also had an actual custom rotary cabinet speaker built for him. This was back in the second half of the 2000s, and he used this Hammond Leslie 3300 for one of The White Stripes tours back then.

Maybe not as “vintage,” but still a vintage-oriented piece, we have the 15-watt Sonic Machine Factory combo amp. This one comes from the 2000s and was made by Mark Sampson and Rick Hamel for a limited time. 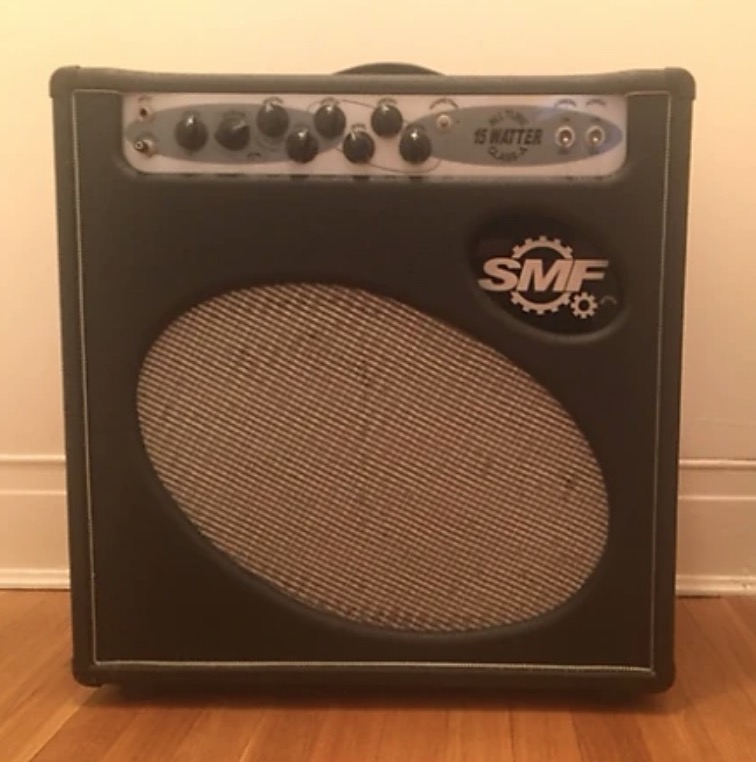 At the same time, many are not even that familiar with the brand. But if you do stumble upon one of these and feel like buying it, you’d probably have to pay about $2,000 or more. It’s a true collector’s item.

While Jack might not be using a whole bunch of what could be considered modern effects pedals, he does have a pretty decent pedalboard.

You can find classics such as the Digitech Whammy IV on there, an MXR Micro-Amp and a Boss CS-3 compressor.

The most noticeable part of his effects arsenal has to be the Electro-Harmonix Big Muff Pi. This is his preferred dirt box and one that you can hear on the majority of The White Stripe’s recordings.

Of course, Jack White became known for his use of the Digitech Whammy. 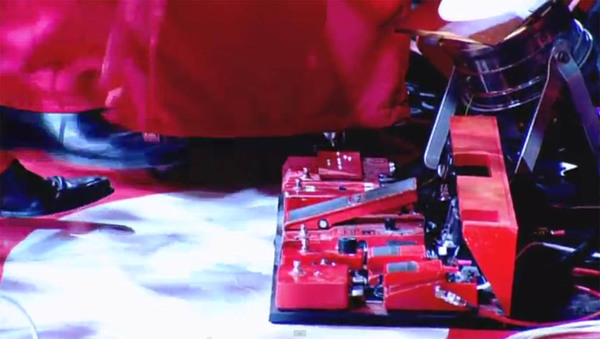 In fact, this is exactly the piece of gear he used to create that unusual bass tone, that actually doesn’t come from a bass guitar, on The White Stripe’s legendary hit “Seven Nation Army.”

Aside from these, he owns some boutique pedals as well. We are talking Zvex Woolly Mammoth which he used on several occasions, as well as a piece like Voodoo Lab Tremolo. 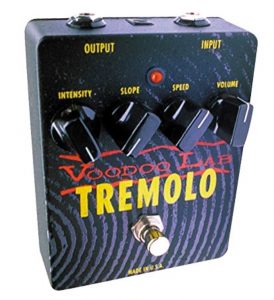 Zvex is a smaller company, but they have plenty of great stuff in their collection. The Wooly Mammoth is a very unique fuzz effect, and we can hear Jack use it on “Another Way To Die,” a song that he recorded for the James Bond film “Quantum of Solace.”

We can also hear him use the Mammoth with The Dead Weather – a rock supergroup that he occasionally works with.

Another interesting thing is that Jack’s pedalboard is painted in red and all his pedals are either red or white.

It just so happens that most of the pedals he uses are fitting this aesthetic requirement quite comfortably, although he is known to paint the pedals as well. Hey, if it works for him…

How much of the impact guitar effects have on his tone, and Jack White’s music in general, depends on which song or album you are listening at any given moment.

It’s fair to say that Jack likes to keep things simple and relies more on what he can get from the guitar and the amp he is using.

Obviously, since Jack White is also a great and unique-sounding singer, we thought it would be nice to mention a few of the microphones that he’s been using over the years.

Looking into his collection, we see somewhat of a similar pattern as we see with his guitars, amps, and pedals – there’s plenty of vintage and vintage-oriented stuff in there.

A great example is his AEA R44CX, which is – to be perfectly honest – an astronomically priced microphone. 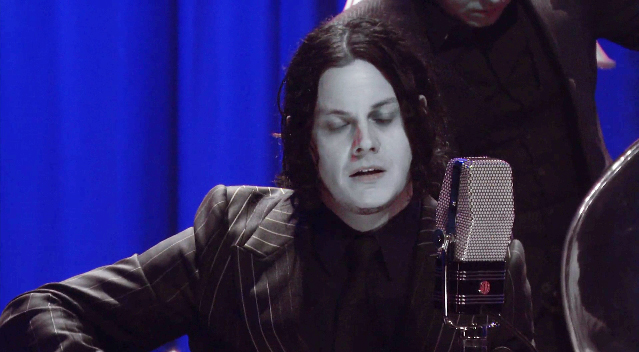 We also have Sennheiser’s E906, which is (definitely) a more cost-friendly option – a dynamic mic with the classic cardioid pattern.

While we’re at good-quality dynamic mics, Shure’s SM7B is another great one in his collection, but that’s more of a studio mic.

But as if the aforementioned AEA wasn’t expensive enough, Jack has Neumann U67 in his collection. 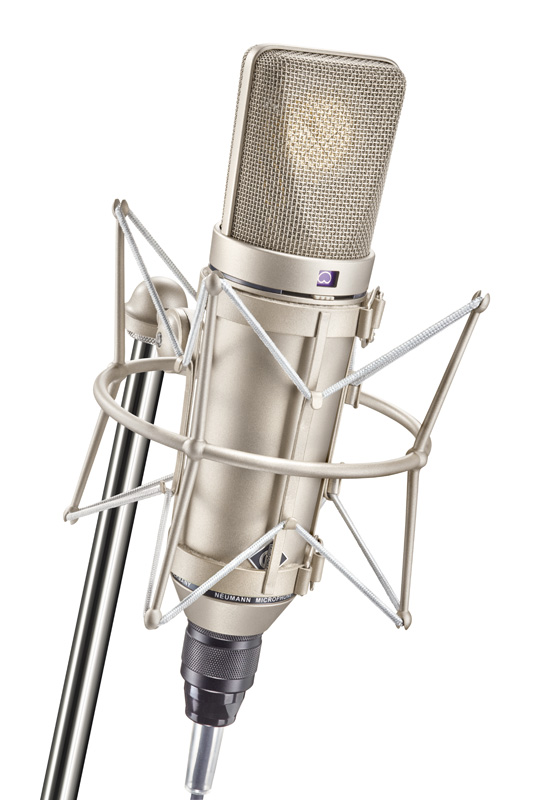 Considered by many to be one of the best large-diaphragm condenser mics, this is one of the company’s best-selling and longest-running products.

The White Stripes are among the rare authentic-sounding bands you can listen to today, even though they’ve broken up.

This combination of two extremely talented people has rightfully gained a lot of attention over the years. Meg is killing it on drums while Jack is just impressive both as a guitar player and a vocalist.

With his other projects, Jack has branched out a lot and has tried many different styles, but his guitar playing is always a huge focus.

What really makes his style of playing guitar special is the fact that he likes to mix things up from song to song. This applies to the nature of the riffs as well as the color of his tone.

Sometimes he’ll dial in that standard overdrive tone with scooped mids and lows, while other times he goes harder on the bass. From clean to dirty, almost no gain to full-on gain saturation, Jack White keeps surprising with every new song. 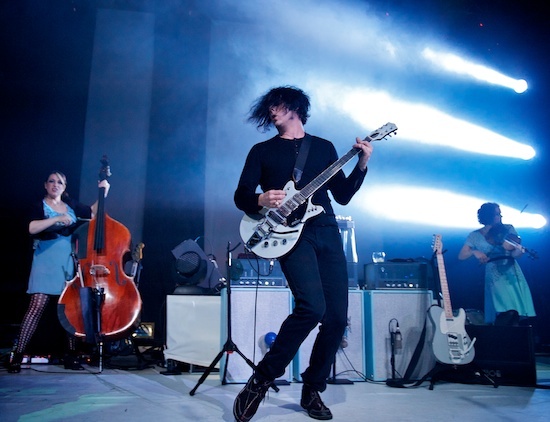 If you are interested in replicating the tone he uses most often, you will either have to dig deep into vintage guitars or find something modern which fits the description.

Semi-hollow models are going to be your best bet, that is for sure. In terms of amps and effects pedals, it all comes down to a good vintage overdrive and a decent set of tubes. Big Muff Pi combined with a compressor of some kind should get the job done in most cases.

If you’re feeling super ambitious and experimental, then a Digitech Whammy can be a good addition. But if you really want to fully replicate his tones, this might be a very expensive pursuit.

As we’ve already explained, he has some very pricy guitars, amps, and effects in his arsenal. Just imagine how high the prices for those vintage Fenders can get.

But at the end of the day, Jack managed to infuse a rather simple concept with a type of complexity of his own. It’s not about how what you have but how you use it – that seems to be his ideology.