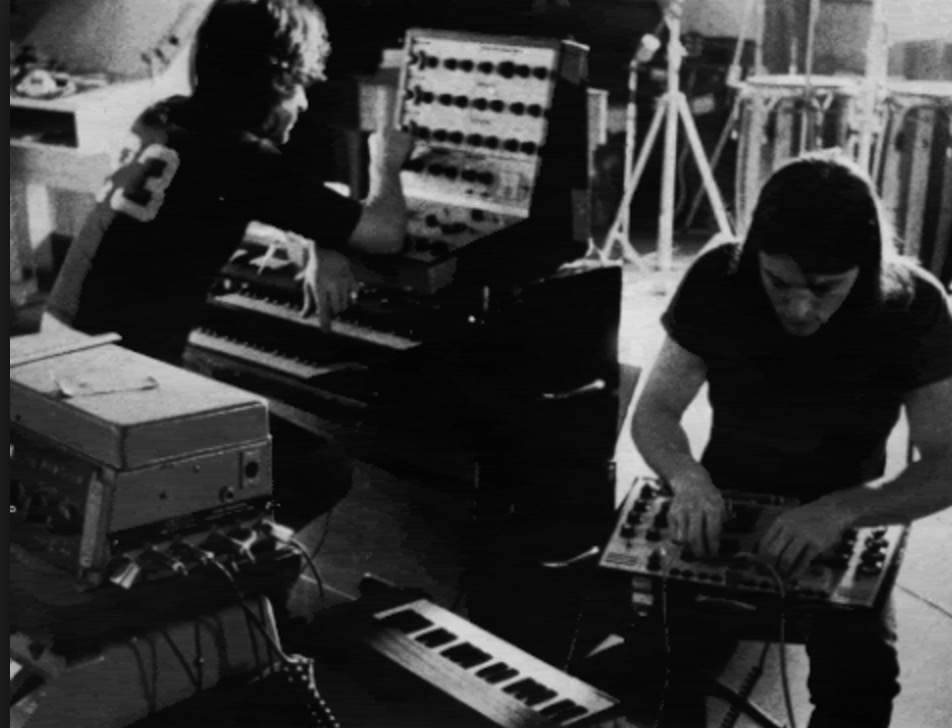 There’s no doubt that Pink Floyd has left an invaluable impact on modern rock music, spawning a whole new genre of its own, or at least proliferating it to a point where it entered the mainstream.  I’m referring to, of course, psychedelic rock.

No band before or since Pink Floyd have been able to make such experimental yet accessible music and take it to such a wide audience as this band. 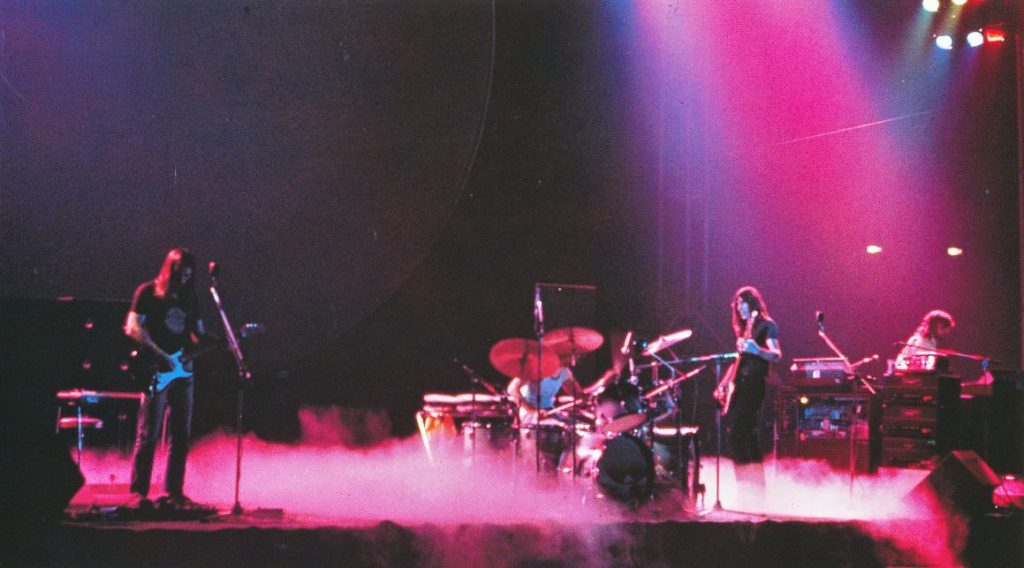 Despite having a wealth of material spread across a multitude of albums and singles that true fans are well aware of, for the most part, this legendary band is known for two groundbreaking and chart topping albums.

There is really no debate in the music community which of Pink Floyd’s are the biggest in terms of mass appeal.  One album is The Wall and the other is The Dark Side of The Moon. The former seems to be a bit more popular among the general population.

After all, you will hardly find a person who hasn’t heard Another Brick in The Wall in one way or another.  Rock radio made sure, and still makes sure, of that.  With that said, the story of The Wall draws its roots from The Dark Side of The Moon. 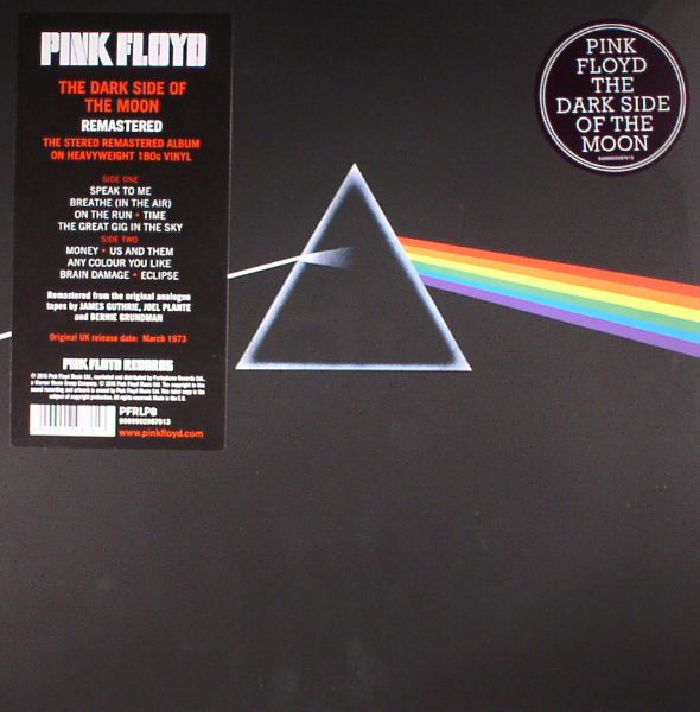 This album not only sets the course of Pink Floyd as a band, but it also gave them a clear picture of what works and what doesn’t in terms of aligning their vision with the production resources they’ve had at their disposal at the time.

They had, at this point, become aware of their personal and collective musical appetites, and realized just what kind of studio they will need, knowing that the creative process has to be respected, and also, how they function both as individual musicians and as a collective unit.

Their creativity seemed to be bursting off prismatically in all directions at this point, as the famous album cover suggests, but it can be taken the other way too, where multifarious hues combine to focus into one beam of pure light.

The Concept for The Dark Side of the Moon

Pink Floyd – and all of its individual members – have elevated the sense of contemporary rock music to a whole new level. While every band at the time was trying to tell a story of their own, Pink Floyd took this mission much further than anyone has ever done before with The Dark Side of the Moon.

If you look at the sheer amount of effort that went into their albums, it was always multi-layered, both lyrically, musically, and texturally.  But Dark Side of the Moon was where they took things to another level, certainly, in terms of the scope of the concept, and the gear that was needed to express such a concept. 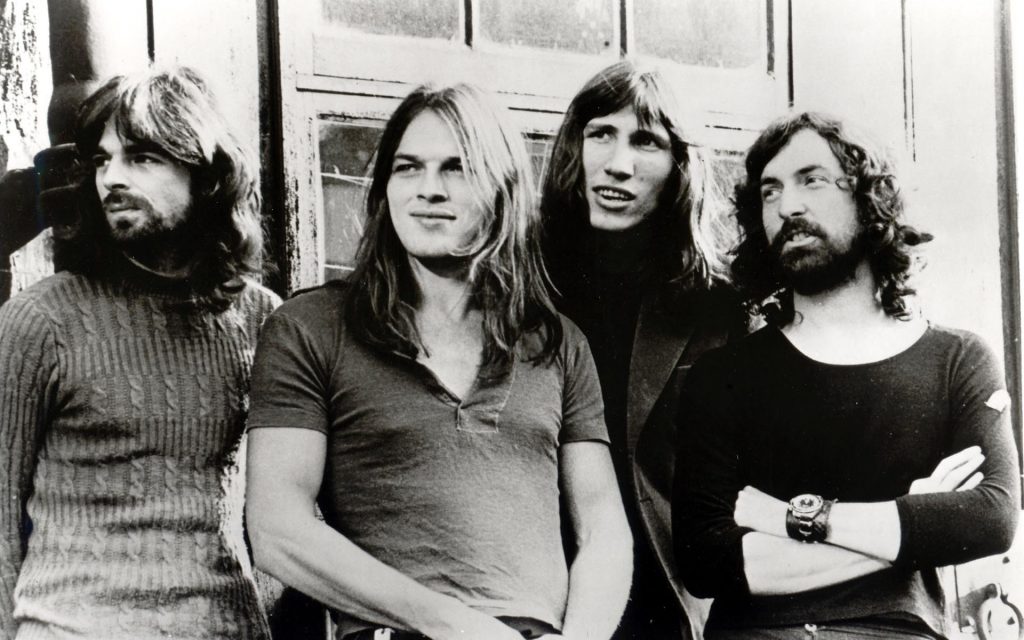 Every song, every effect on this album had tangible meaning, and the only way you could convey these very elaborate expressions into something that actually made sense was to have the right kinds of musical tools at your disposal.

This fact became painfully clear after long and fruitful experiment sessions. The band was onto something.

Pink Floyd soon had the music down for the most part, knowing exactly what kind of vibe they were after, but they simply lacked the necessary tools to build and complete their vision the way it was meant to be.

The moment of realization that more serious approach needs to be taken, happened sometime before the May of 1972. During that month, the band went to the famous Abbey Road Studios and started actively recording.

Here’s the band back in 1971, bonding over oysters, previous to their arrival at Abbey Road.  Wonder if those oysters were any good…

Dark Side of the Moon – Equipment

There are several reasons why the band chose this specific studio to record The Dark Side Of The Moon.

At the time, it was the most advanced studio in the country, and probably elsewhere, which allowed them to record everything just the way they wanted to.

One of the big parts of that whole process were the EMI TG12345 consoles. 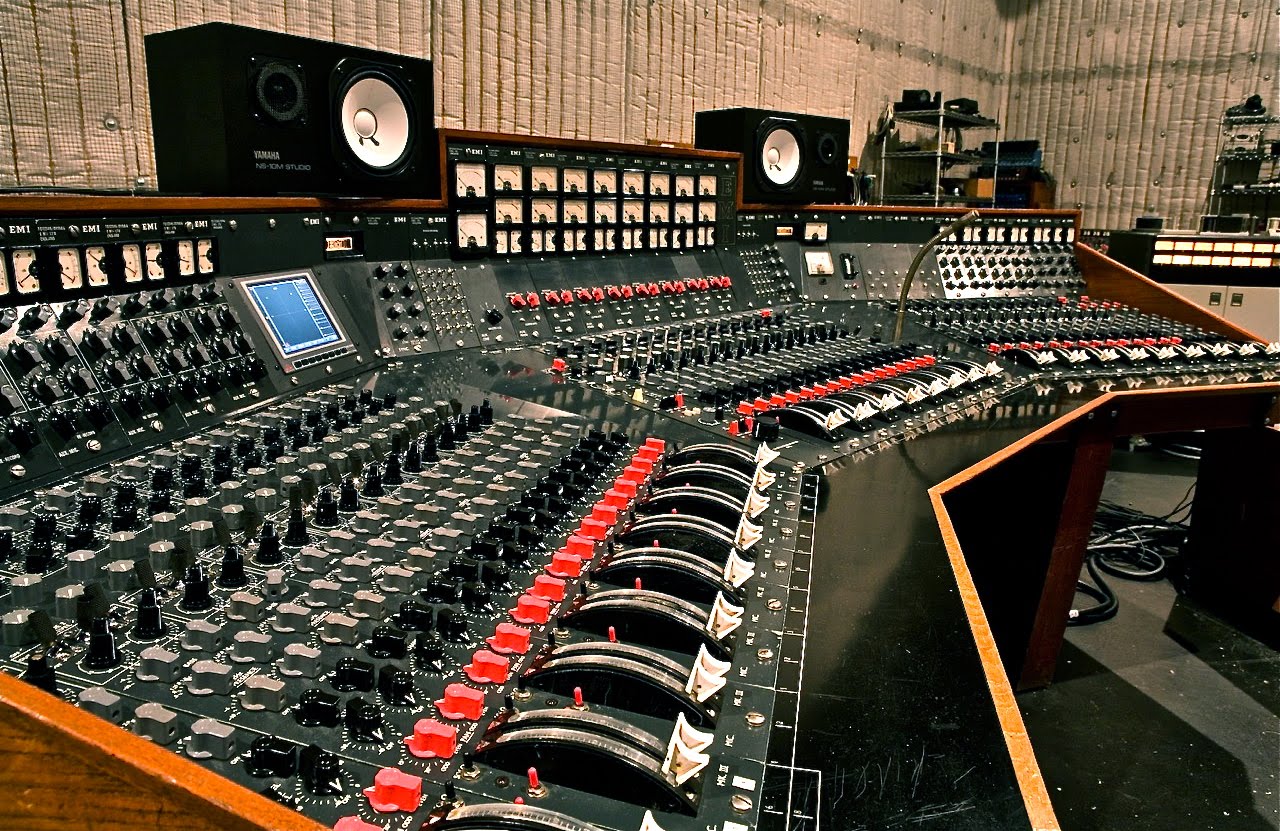 Back in those days, these were state of the art instruments for studio production.

The band was able to work with up to 16 track mixes at any given moment, which completely changed the game. Previous to that point, the most Pink Floyd ever had a chance to work with was 8 track mixing at best.

Aside from a powerful console that was the foundation of the entire project, EMS VCS-3 synth played a significant role in the creation of this album. 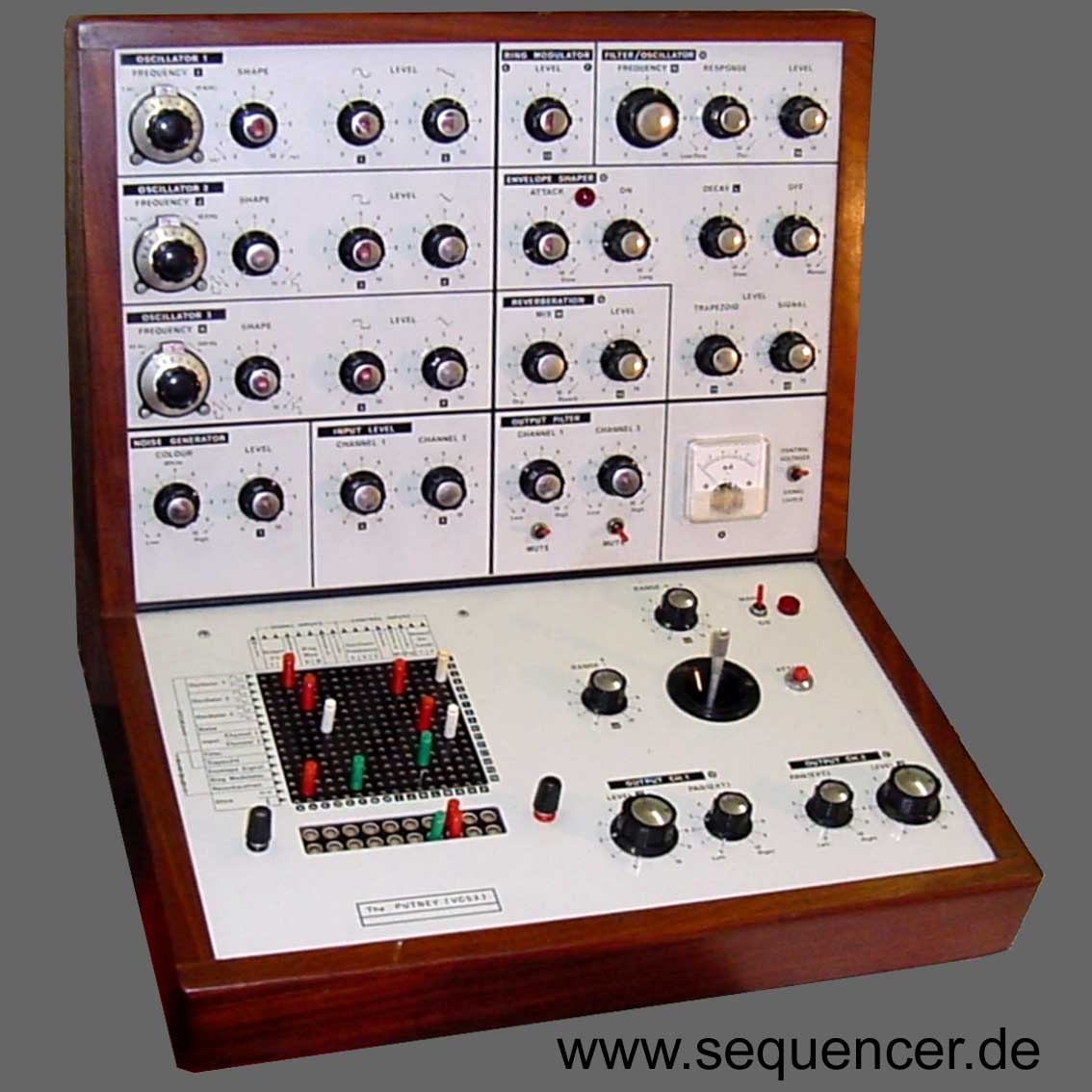 A lot of loops and effects were inserted into a variety of songs from the album using this synth.

In some ways, you could probably say that The Dark Side of The Moon wouldn’t be the same as those subtle details really put the whole album into a class of its own.

When it comes to personal rigs of each of the band members, we can start with David Gilmour.

As you would expect, his main axe was the 1969 Black Strat packed with the standard Fender pups and a custom switch that allowed Gilmour to select more versatile pickup combos.

Sometime between the first and the second recording session of Dark Side of the Moon, he installed a Gibson PAF humbucker between the bridge and middle pickup.

However, whether or not he used this setup for recording is not known at this point.

The other axe he used was a 1970 Strat with a mahogany body and custom pups. This one was used for Brain Damage and several other songs. 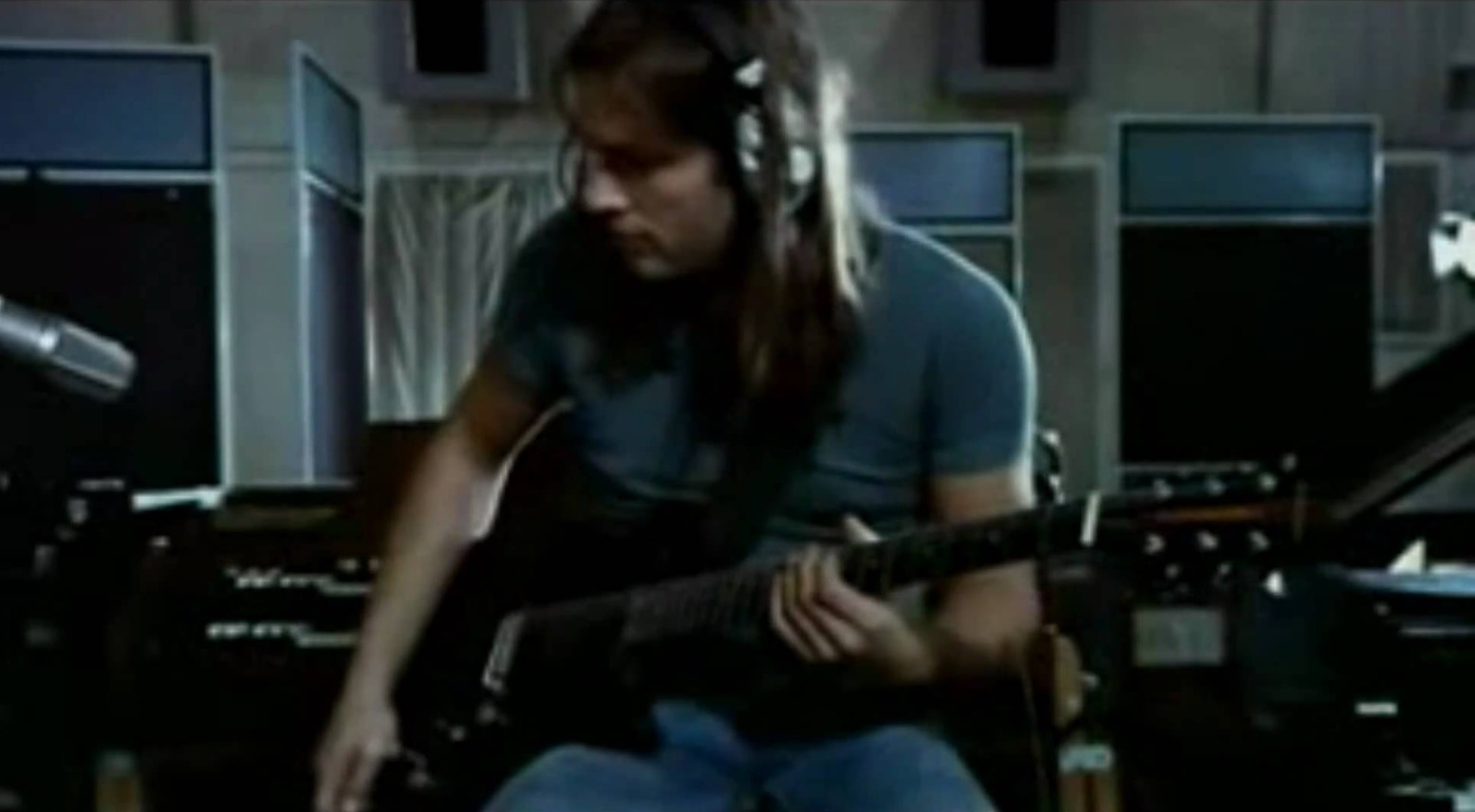 His effects pedals included, but were not limited to Binson Echorec PE 603 EMS and Synthi Hi-Fli guitar effect processor.

Roger Waters used the same Fender Precision bass that the band had purchased after their gear was stolen in 1970.

During the recording of The Dark Side of The Moon, the bass has been modified by replacing the standard rosewood neck with a Charvel maple neck and a set of Kluson tuners. 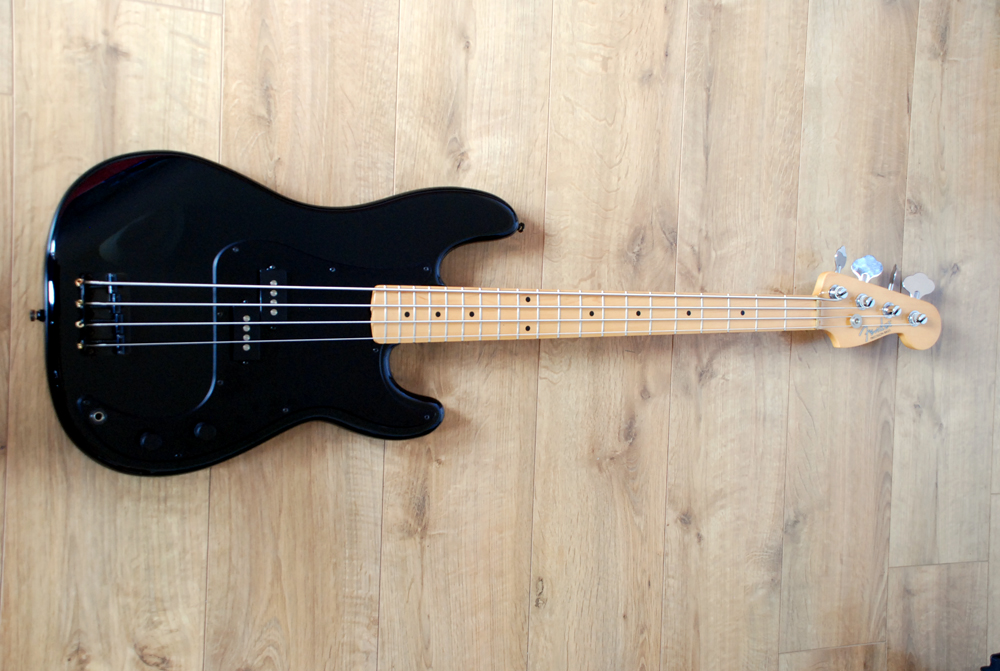 Richard Wright had a experimented with his setup during the recording. For example, he used a Wurlitzer electric piano that was routed through a wah pedal.

This is also the time when he was at the peak of experimentation with synths.

That VCS-3 we have mentioned earlier saw a lot of use, but Wright also played around with a Minimoog and ARP String Ensemble. 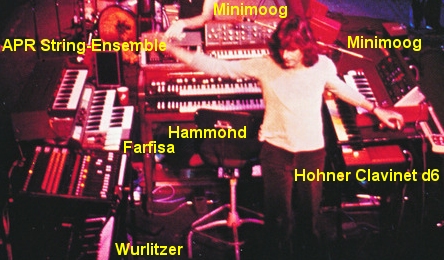 Nick Mason was using whatever there was available at the studio, although he also experimented with sound in some ways.

The most memorable instance would be the specially coated bass drum that was created specifically to recreate the sound of a heartbeat.

Here’s an interview with Nick Mason where he talks about The Dark Side of the Moon at length, providing valuable insights.

If you still crave more, this next video features both Nick Mason and Alan Parsons, discussing the album.

The way The Dark Side of The Moon turned out had a large impact on the next big album the band was going to release seven years later.

In many ways, they have learned valuable lessons from The Dark Side of The Moon, which is pretty obvious once you play The Wall.

Pink Floyd is one of the most influential rock bands to ever grace the earth. 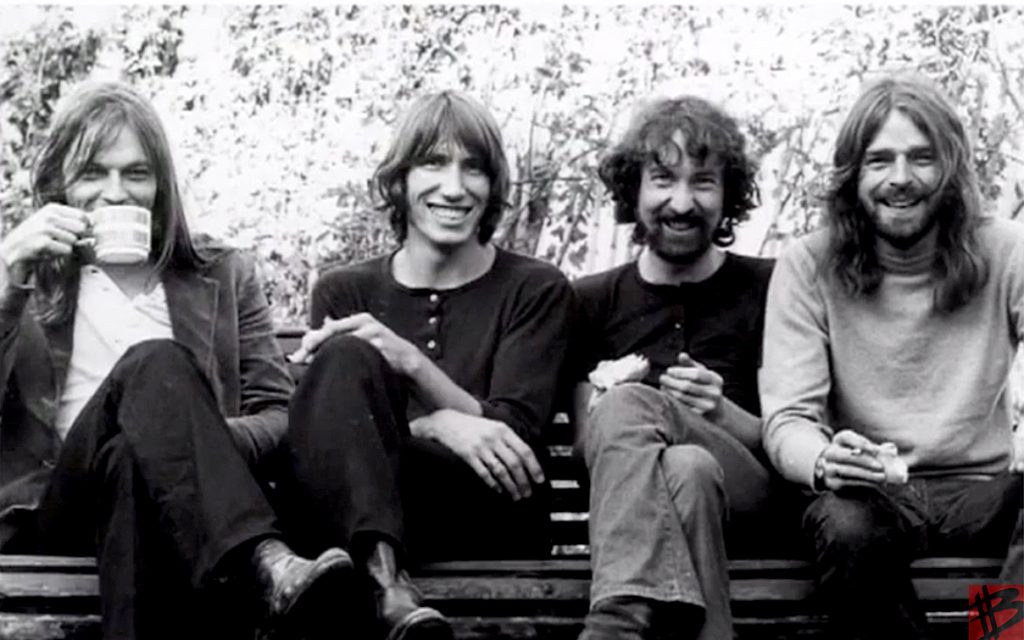 Their music has depth like you will hardly find today, which was created with equipment that is from the stone age compared to what artists have at their disposal today.

With them, it was all about the vision and the story The Dark Side of The Moon was meant to tell.

This legendary album will go down as one of the most important ones in the history of music, but rarely will anyone look at the equipment that was used to bring it to life.

We hope that we’ve given you some insight into the behind the scenes tools which the band used at the time.

Here’s a mini documentary about the making of Pink Floyd’s The Dark Side of the Moon.  If you haven’t seen it…see it!  This is followed by the band playing the album live in 1974.