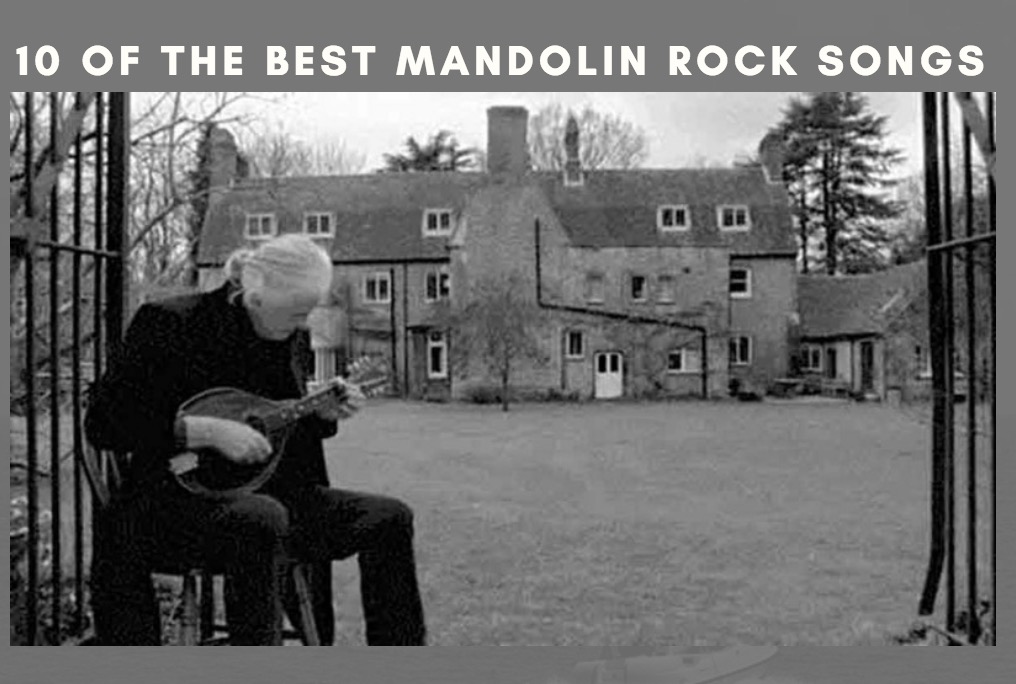 Here is a song called Come With Me My Giselle that dates back to around 1300, so you can hear how mandolin originally sounded back then when played by the bards of the day.

In terms of playing, the mandolin is an instrument that requires organic movement with loose wrists.  It is a very moody sounding instrument, whether it plays a happy tune or a sad one.

Because of its past, many people don’t expect mandolins to show up in classic and / or modern rock music.  These days, you more often hear mandolin in bluegrass bands.

And yet, once in a while, it does make an appearance in a rock song with either a cool riff or sometimes it is the featured instrument of the entire song. Doubters might question the combination of rock and mandolin.  But not to worry, it usually sounds not just good, but often great!

Popular bands you know and love like Led Zeppelin, R.E.M., and the White Stripes have employed the unique sound of this instrument in some of their best loved songs!

So, here are 10 of the most popular, famous and indeed best mandolin rock songs ever written.  They might even make you want to pick up the instrument and learn to play.  Have fun listening to these great tunes and hearing some of their backstory to boot!

Friend of the Devil – Grateful Dead 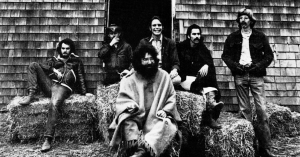 This song was released in 1970, a popular era for the use of mandolin.  Acoustic strings were widely used in rock songs of the time.

It is highly popular and to this day is covered by many musicians, for it features G scale notes and acoustic instrumentation. Definitely one of the best rock songs with mandolin out there.

The lyrics describe a man who is on the run, though his crime is never fully explained.

It says, “A friend of the Devil is a friend of mine,” though it is clear through the lyrics that the character is on the run from all the questionable choices he’s made, and the circle will never break.

And here’s a live version of Friend of the Devil, featuring famed mandolin player David Grisman playing along with Jerry Garcia.

For interest’ sake, here are the handwritten lyrics that the ‘Dead wrote themselves. 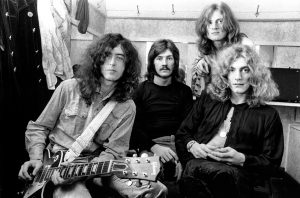 Released in 1971, this folk duet is about Lord of the Rings, and mandolin would be a natural choice of instrument for this one.  The Battle of Evermore is sometimes lovingly referred to as “the Led Zeppelin song with mandolin”.

Page played the mandolin for this track, although it belonged to Zeppelin bassist John Paul Jones.  Page once explained the writing of the song, saying “The Battle of Evermore was made up on the spot by Robert and myself. I just picked up John Paul Jones’s mandolin, never having played a mandolin before, and just wrote up the chords and the whole thing in one sitting.”

The mandolin, as you may have noticed, is a rather small instrument and it’s favoured for its portability, as musicians would travel and tell stories using the instrument.  These people were called bards.  This song carries on that legend, using imagery from the popular fantasy series to create a bard-worthy tale.

There isn’t a huge amount of live Led Zeppelin footage, but here’s the band playing The Battle of Evermore back in 1977.  Interesting to see how they pull it off live, with JPJ and his crazy multi-necked guitar and unique vocal additions.

Did you know, Zep’s Going to California also features mandolin? 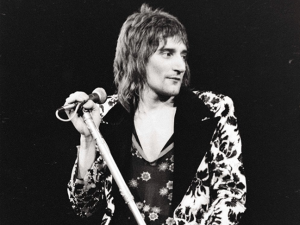 Another song from the early 1970s, this is one of Rod Stewart’s best known tracks. It describes a relationship between a boy and older woman, and is based on his personal experience.

Rod himself said that the song is about his first sexual encounter with a lady at the 1961 Beaulieu Jazz Festival.  So that’s what the song is about, but the name Maggie May was apparently “… an old Liverpudlian song about a prostitute.”  Interesting.

It was a widely regarded song, topping the UK charts not to mention the USA, Canada, and Australia back in 1971. 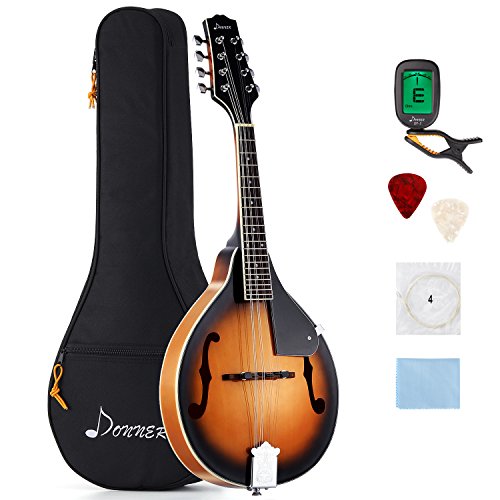 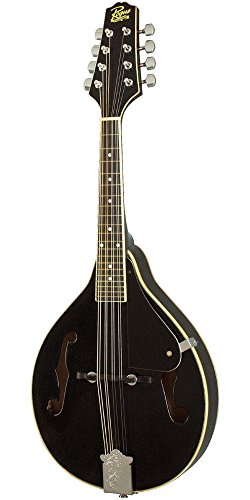 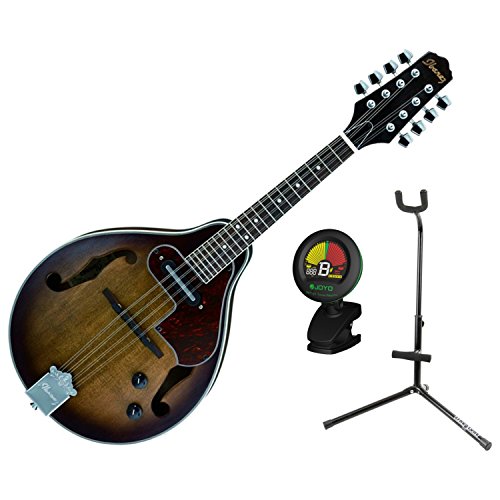 This song might be tied with Battle of Evermore for having the most recognizable riff, both played on the mandolin. This is without a doubt R.E.M.’s most popular song to date.

It was released in 1991 as their first single from album Out of Time, which went on to lift the band to new heights of fame and fortune.

The guitarist, Peter Buck, had just purchased a mandolin, was learning how to play it, and recording any riffs he practiced.  He was a little sick of being associated with the guitar at the time.

Essentially this riff for Losing My Religion is what helped him learn mandolin, and ironically is one of the most popular songs the band have written to date – probably THE most popular, actually. Often the most organically formed songs become the best known.

Here’s what Buck told Guitar School in 1991: “I started it on mandolin and came up with the riff and chorus. The verses are the kinds of things R.E.M. uses a lot, going from one minor to another, kind of like those “Driver 8” chords. You can’t really say anything bad about E minor, A minor, D, and G – I mean, they’re just good chords.

“We then worked it up in the studio – it was written with electric bass, drums, and mandolin. So it had a hollow feel to it. There’s absolutely no midrange on it, just low end and high end, because Mike usually stayed pretty low on the bass. This was when we decided we’d get Peter (Holsapple) to record with us, and he played live acoustic guitar on this one. It was really cool: Peter and I would be in our little booth, sweating away, and Bill and Mike would be out there in the other room going at it. It just had a really magical feel.”

As an added bonus, here’s Michael Stipe talking about how the mandolin came to be part of Losing My Religion. 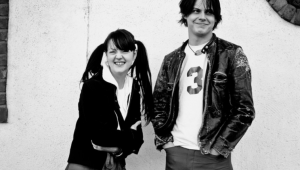 This song is more recent, released in 2005. The mandolin is not commonly used by this band, but adds a great rhythm to the song and makes use of Jack White’s interest in folk songs.

Prior to this album, The White Stripes typically had a very rocky, raw sound, like garage rock.  But Jack White, ever the experimenter, was not one to shy away from mandolin when the time came.

This album had a very folk and acoustic sound. The mandolin in this song is simple and rhythmic, fast and undeniably catchy.

Here’s a great live version of Little Ghost that shows how this song could essentially have been written centuries ago and been a hit in the late 1800’s.  Jack and Meg just have that old type of soul, I guess. 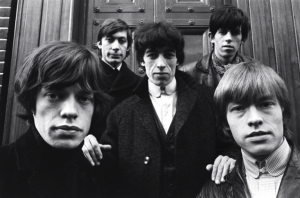 This song takes the Rolling Stones to the roots of down-home blues, not a sound they are known for unless you’re a dedicated Stones fan, but wonderfully refreshing and heartfelt if you give it a listen.

The acoustic instrument with slide guitar pulls on your heartstrings. The mandolin comes in at the 2-minute mark during an instrumental break to give a full roots/blues feel.

This song was released in 1969, originally written by bluesman Robert Johnson, who used a departing train as a metaphor for loss and unrequited love. On the recording, famed musician Ry Cooder steps in to do mandolin duties on the song.  An awesome piece of work!

It seems to be well known in the mandolin community that Stones’ songs and mandolin go together well.  Here is an epic cover of Paint It Black that helps prove that point, played on an “Uber-rare 1931 Kay Kraft Mandola.” 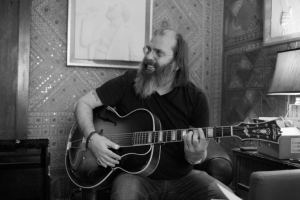 Released in 1988, this album combines bluegrass with heavy metal. The songs introduce country music’s storytelling to the rhythms and chords of rock music.

The title track Copperhead Road is about a Vietnam War veteran who returns to Tennessee to sell marijuana.

Copperhead Road is a real road, and the song was so popular that the road had to be renamed to Copperhead Hollow Road to stop people stealing the street signs.

It has also been used as theme music for the TV show Moonshiners, and for line dancing.

Here’s a cool video showing how Copperhead Road is played, up close and personal.  Nice! 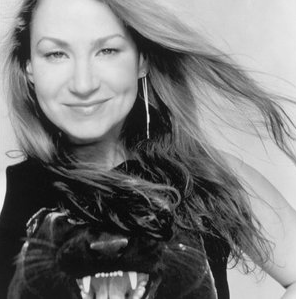 This song is inspired by a woman who would sell drugs openly on a street corner, with her child in a stroller next to her.

Joan would see this woman from her apartment window. The mandolin is very softly strummed throughout the song but adds a poignant jangle.

St. Teresa of course was the first canonized woman/nun, a figure to whom female Catholics relate and idolize.

Here’s Joan and her band playing the tune on Letterman back in 1996.  Mandolin sounded great that time as well!

Boat on the River – Styx

This is possibly the best example of mandolin use on this list.

The mandolin is accompanied by an accordion, stand-up bass and acoustic guitar, and revives a very traditional mandolin sound with minor chords, solo picking and tremolo strumming during the instrumental bits.

Boat On The River sounds just like a medieval folk song, and it comes from their album Cornerstone.  The band themselves are probably best remembered for Mr. Roboto, a very un-folksy sounding song if you know it (who doesn’t?)

If you’re interested in learning this awesome song, here’s a great tutorial. 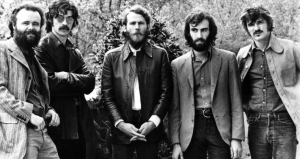 Another example of honky-tonk train blues, this song sounds just like one you’d hear a band playing when you walked into a western saloon.

It sounds like a fun loose song, but all the playing is right on point and will get you grooving.

It is one of their most famous songs: fans loved it for its toe-tapping fun. It’s so lively it could be in an old cartoon.

Hey, thanks for checking out our list, but we’re not quite done.  Here are a few more mandolin-based songs that you might know featuring Chris Cornell, the Goo Goo Dolls, and the Lumineers.  We just couldn’t leave these gems off the list.

Now we want to show you some cool mandolin covers of rock songs we came across that you might enjoy listening to.