Digital Audio Workstations; when it comes to them, music producers are spoilt for choice. Hang on; what’s a Digital Audio Workstation? If you’re not new to this, you already know the answer so move on to the next paragraph. But if you’re a new or an aspiring music producer, a DAW is simply computer program used for editing, recording and producing music.  (see screenshot below) 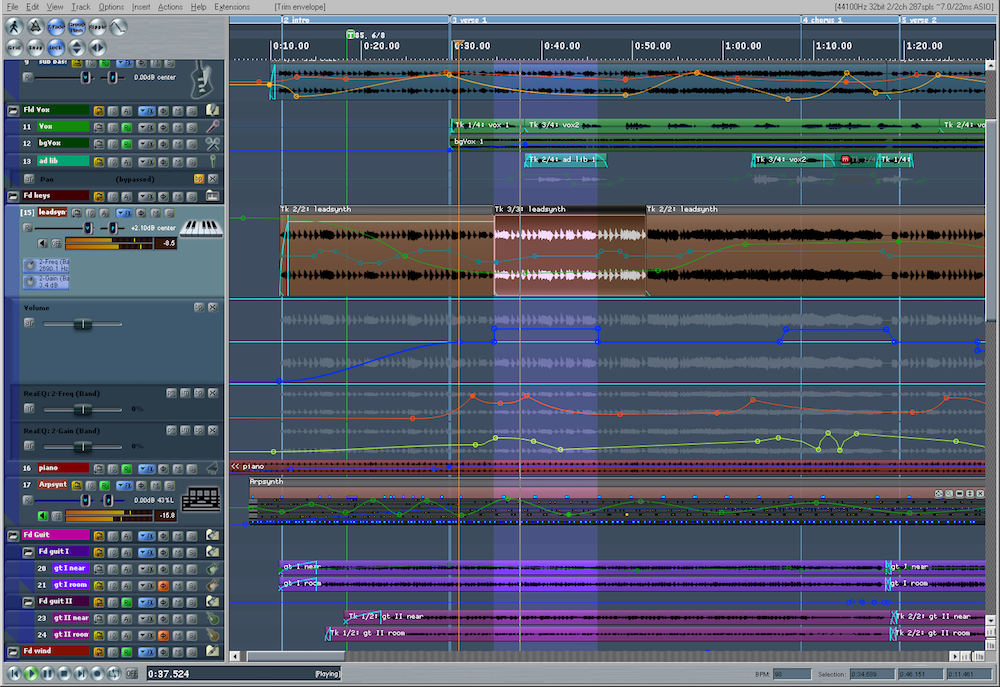 Sequencers Vs. Trackers – What’s The Difference?

Now, all DAWs achieve the same goal: making good music (They’re at least meant to). But every workman has their preferred tools of work and music production software is no different. You can classify these programs in whatever categories, but today, I’m gonna focus on sequencers versus trackers.

The simplest explanation is that trackers involve a top down approach while sequencers take in a horizontal approach. Feeling lost? Stay with me. Let’s briefly look at the differences.

How A Music Tracker Works Vs. A Sequencer

First, we have the appearance. Trackers generally look like spreadsheets with cells whereas a sequencer’s interface looks like a bunch of channels with a bar behind it, representing a score of music.

Secondly, the mode of entering the notes is different too. With a tracker, the notes are written down (e.g. A, G, B). Sequencers are different. They take on a graphical form, with the optional feature of having the actual note script or using the piano roll.

Finally, with a tracker (as is with a spreadsheet), you can view the content of all channels in your project all at once. Of course if your channels exceed a certain number, you’d have to scroll but generally everything can be viewed together.  Here’s a little video example of a tracker in action, complete with composition for your education / enjoyment!

Sequencers, on the other hand, only display one channel at a time, allowing you to make an edit on only one sound at a time. Here are some examples of sequencers: FL Studio, Ableton, Reason and Cubase. Commonly used trackers include Renoise, FastTracker,and OpenMPT.

Here’s a song someone made with Ableton, a sequencer.

You must be thinking, which is better then? Perhaps my personal account of the experience with both kinds will give you some more insight. The pros are probably already happily married to their DAWs with children but if you’re a newbie, hopefully I’ll pique your interest and you’ll be able to make a better decision, knowing all the options available to you.

After being inspired by some very good progressive house music, I wanted to know how the EDM producers made these tunes. My research led me to Ableton’s website where I downloaded Ableton Live (I don’t remember what version). I then played around with the software, layering a few percussions with very basic melodies before deciding that this was too complex.

Watch this full tutorial of Ableton Live 9 and this should give you a full dose of what you’re in for with this music sequencer.

Check out the latest version of Ableton Live on Amazon now

My next stop was on Image-Line’s website where I downloaded a demo of FL Studio 9 (there are newer versions, I think they’re up to 12 now). In comparison to Ableton, the interface was different but I still couldn’t understand a lot of the stuff. I tried watching tutorials on YouTube but I still wasn’t satisfied. It was still painful and I’m not one of the most patient people. Recipe for disaster, right? But I wasn’t done. I kept looking.

BTW, here’s a video tutorial of FL9 just so you can see how it operates.

Check out the latest version of FL Studio on Amazon now

My next action was to ‘borrow’ an illegal version of Cubase from a torrent-sharing website. Any difference? Nope. I was done within a week. Now, please don’t misunderstand me, I’m not saying that these programs sucked or had any kind of flaws. Hell no! In fact this was purely me and my impatience and dreams of being an overnight superstar, playing back to back (no pun intended) shows in Vegas.

Watch this tutorial of Cubase to learn the ropes of this software.

Check out the latest version of Cubase on Amazon now

So the story goes on. Being an Electronic Music fan, I happened to be browsing through an EDM forum one afternoon and someone commented that they had just downloaded a DAW that approached music production differently. The notes were entered in a coding sort of way. A few screenshots attached to the post piqued my curiosity and in the next few minutes I had Renoise version 2.8.0 installed on my old PC.  Renoise looks a little something like this…

A lot of things were different but of course it was still Greek to me. I watched the first ten tutorials and got to know my way around a few things. What appealed to me most about the vertical approach was how it allowed me to see everything together. The kicks, snares, claps and everything else appeared on the same screen and there were no floating plug-ins that annoyed me in my previous encounters with music production software.

My Personal Choice of DAW – Renoise!

Upon doing more research, I found out that this was in fact nothing new. Trackers have been around for so long. I never made a point to check out any other DAWs but fast forward to today, I’m still using Renoise. For those wondering, I’m still nowhere near Las Vegas (even physically) but I’ve improved my production skills a lot and occasionally make theme music for video producers.

Like I said, I am not in any way endorsing trackers or even Renoise itself but I feel this is what works for me. In between, I tried going back to the previous DAWs I had used but I’m still in love with the tracker concept that I simply couldn’t. I tried to get my producer friends to try Renoise and they all quit it within no time saying it wasn’t for them. One friend pointed out that most trackers are mostly meant to be used with samples rather than plug-ins and this is true. This goes to show you that we are all very different. What works for me isn’t necessarily what will work for you. Despite the title, you should view this post as a comparison rather than a ‘versus’ approach. I simply meant to open you up to all the options out there. Which is better? None! The better one is whatever works for you.

So then go forth and make good music! Remember, it’s not about what software you use but the quality of music you create. Is going either the tracker way or the sequencer way a step in the wrong direction quality-wise? Hell no!

4 thoughts on “Music Sequencers Vs. Trackers – What’s The Difference?”