On October 11, 1992, a star was born in the Bronx. Her name is Belcalis Almanzar, otherwise known as Cardi B.

Since then, Cardi B has held a plethora of occupations in the spotlight. She began as a stripper and gained attention when making her debut as an online personality through social media apps such as Facebook and Instagram. Through social media, she revealed her comedic personality, which brought her to online fame.

Cardi B began to go viral! Her funny videos and snippets of stripper chat were circulating on all platforms and she became an Internet celebrity in New York. Her Bronx accent, her bossy attitude, and her hilarious charm soon brought Cardi B to a worldwide audience.

Her savvy self-marketing skills and go-getter attitude allowed her to create a brand for herself with her newfound fame. With that, she released her first music track in 2015. She was on the remix of Shaggy’s song “Boom Boom”. She also released a track and music video called “Cheap Ass Weave” that put the spotlight on her.

That same year, Cardi B became a cast member for the popular reality TV show Love & Hip Hop: New York. This show focuses on the lives of hip hop music artists. She remained on the show until 2017, making and releasing consistent music throughout that time.

In 2016, Cardi B dropped her first full-length project, Gangsta Bitch Music, Vol. 1.  Everything from the cover art to the catchy lyrics began to gain attention from media outlets, radio stations, and hip-hop blogs. Cardi B became the woman to watch. 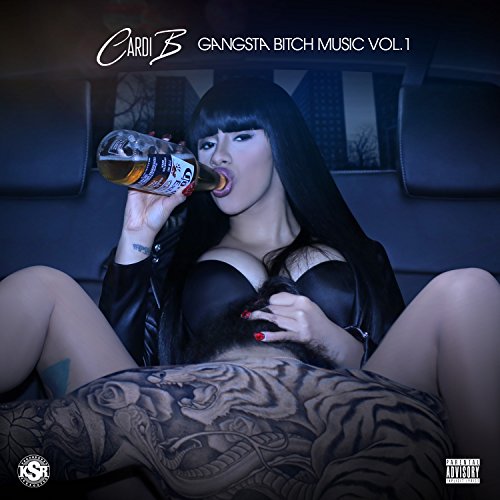 In February of 2017, Cardi B landed a promising music deal with Atlantic Records. Many people were shocked that an online sensation could land such a significant deal with a major label. This in itself was monumental for hip-hop.

Many rap fans were skeptical, while others were thrilled. People waited on new released to see what the young woman was made of. It turned out to be shmoney! Cardi B didn’t disappoint, as the hits kept coming! She released a second volume to Gangsta Bitch Music in 2017. She started appearing on magazine covers and being endorsed by other celebrities. She became the newest international rap sensation.

In June of 2017, the famous Bodak Yellow was released. If you haven’t heard of this song yet, where have you been? It is the anthems of anthems, an iconic bop! You can find it playing anywhere—at the club, in the grocery store, at your local shop, at Starbucks, etc! Bodak Yellow has surpassed expectations, becoming a certified platinum record after holding the number one spot on the Billboard Hot 100 chart.

Ever since her hit single Bodak Yellow, Cardi B has become a permanent face in the music industry. She is well respected by fellow music artists and has been congratulated on her successes by so many other well-known rappers. She recently worked on “MotorSport” with Nicki Minaj & Offset, which was a great feat of a collab from fans of female rap.

Cardi B has a multitude of other tracks that are up for release. She is a fan favorite in hip-hop, and the fans are hungrily waiting for more. This week, she released a single called “Bartier Cardi” featuring 21 Savage. She also continues to make her regular (and hilarious) appearances on social media, maintaining the same humble and funny personality that she began with/ The crowd is going crazy for rapper Cardi B and we can see why!