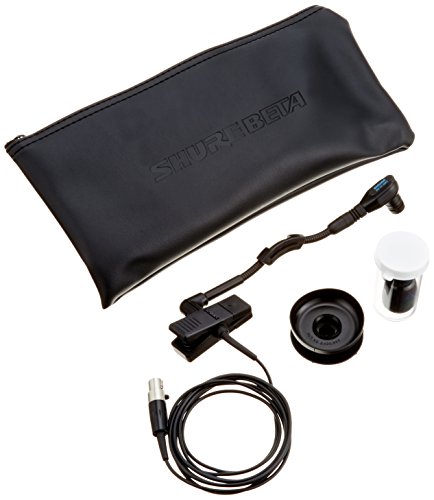 The company has been creating audio devices since 1925. Each year, they remind themselves of their dedication and reinvigorate their passion for providing customers with superior audio products. They’ve been making microphones since radios became widely available in the 1930s.

The company became known for their specialize microphones for military applications in tanks and aircrafts. They needed to ensure that the microphones were rugged enough to stand up to battle conditions. The same practices make their microphones incredibly durable and dependable.

The design of this clip-on instrument microphone allows you to attach it with little fuss. Instead of having a large microphone stand, microphone, and wires for the instruments, one clip-on mic will do the same job. When you’re on stage or want to move around with your instrument, it can be difficult with a mic that doesn’t move with you. You’ll lose the sound of your instrument if it’s not facing the mic stand. That doesn’t have to be a concern when you use a clip-on mic. Once attached, you can really groove with as your music moves through your body. No need to be stiff and unmovable.

This is vital for a microphone attached to an instrument. During a performance, you’ll want to keep the key and mechanical noise to a minimum. Instead of the clicking and vibrations of your hands on the instrument itself, you want the sweet sounds of the music to be the only thing flowing through the mic. This is why it’s vital that there be a shock mount in any mic, but especially a clip-on mic that can easily pick up your hands playing the instrument.

There’s a lot of sound pressure coming from a percussion or wind instrument. That can change the sound of the music immensely if you don’t have the right microphone. There are extreme demands made on the microphone when using brass, woodwind, and percussion instruments. It calls for a special microphone that is designed with a wide dynamic range for high SPL, or sound pressure level, environments.

The supercardioid pattern is uniform to reject sound that doesn’t come in from the front of the instrument. This reduces the amount of background noise from other instruments and sounds from breathing or hand movements.

There’s high gain before feedback is a cause for concern with this mic, too. Some customers have reported that prior to the mic, nobody could hear their instrument in a band situation on stage. After the mic was used, the microphone had to be adjusted because the instrument sound overpowered the others.

This microphone can be used with a variety of optional mounts. They’re purchased separately, but you can certainly get the drum mount (A98D) to attach to this unobtrusive microphone. This allows you to have one microphone with multiple attachments for use with a variety of instruments. The mount will hold the mic firmly while you position it to your satisfaction.

There are also interchangeable mic cartridges for different polar patterns. When you have the option of more polar patterns, you can capture sounds from multiple directions depending upon your needs at that moment.

What kind of power source does this microphone need?
The condenser mic needs phantom power.

Does it need an adapter?
Yes. You can purchase a XLR male connector/adapter for the microphone.

Is there a mute button or volume control on the mic?
There isn’t a way to control the volume on the mic itself except to mute it, but you can use the goose neck to angle it back if the instrument is too loud.

Is this a reliable, durable microphone?
This microphone is incredibly sturdy. At times, the goose neck wire gets a workout and might need to be replaced. Fortunately, there’s a warranty for Shure products.

What instruments work best with this Shure WB98H?
You have an unlimited amount of options for this wireless mic. You can use it with a trombone, saxophone, oboe, clarinet, and trumpet as well as other brass and woodwind instruments.

We recommend the purchase of this Shure wireless mic for those who want a reliable mic that’s perfect for attaching to instruments. You’ll feel better with the warranty as well as the history of this company since Shure has been around for generations. Not only are the mics themselves a powerhouse, but the company can be relied upon to be around for generations to come.