Today, we’ll be reviewing about Regality’s wireless karaoke microphone.  Regality is a tech-savvy company that produces things like musical instruments, watches, lighters, and, of course, microphones.  All of these products look state of the art and the aesthetic considerations are on point.

That means it’s perfect for karaoke, but other things too like if you are hmm let’s see.. giving a sermon, doing a podcast, or MC’ing a wedding (not that I’ve done either of those things, but still…) 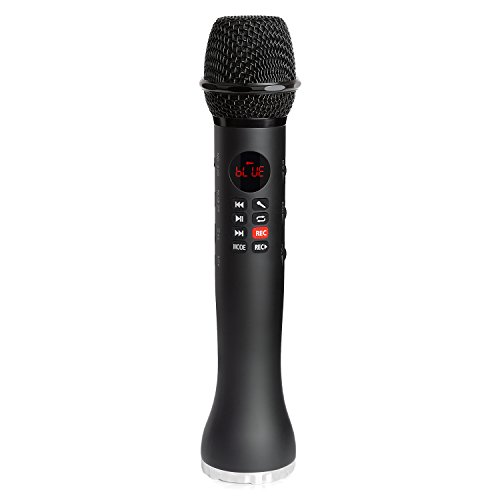 Wireless microphones are getting more and more advanced as time goes on, but that really translates to the user as more convenience.  This is truly a great microphone for those who really seek the benefits of having a wireless mic.

Oh, and this microphone comes in a few different colours such as: Gold, Rose Gold and Black.  Rose Gold is my fav, just because I’m a girl and I guess that’s stereotypical of me but so sue me!

The Regality mic here can be paired to any system that is compatible with bluetooth. The microphone can also be used as a recording device – for those who might use the microphone for interviewing or such.

This microphone is built with a built-in speaker using a high fidelity, high sensitivity, treble clear and bright, bass is thick and strong. The speakers on the microphone are great considering the speakers are connected to the microphone.

Output power is: 9W (RWS) and weighs about 500g – not every heavy at all.  The device is safe and easy to use.  Seriously, even I can use this thing no problem and I’m not someone you might refer to as “tech savvy”.

In fact, that’s what I must say I liked best about it.  Once I opened the box, I turned on my speaker system, got some karaoke going, and this mic was good to go.  Oh, and also – it can go pretty loud.  When I turned up the music, my half-decent singing voice was able to compete with it easily.

The microphone is great for those who are just starting out in any type of career such as – comedy, public speaking, interviewing and the fact you can record yourself with it is great and very handy.

As someone who has literally tripped on a mic cord and smashed their head on the floor, I really appreciate the fact that there’s no cords to deal with.  It wasn’t long ago that I had no idea that these wireless mics even existed, but boy, now I sure am, and it’s great for the people who use them.

Sure, you always argue that this thing isn’t as durable as a Shure 58 (industry standard performing mic), but honestly, most of the time, when I’ve been at a show, there’s always someone who is looking for a mic like it’s an emergency.

And, if your sound system supports bluetooth (eg. something by ION Systems), you just can hand them this.  Just don’t drop it, because while it isn’t fragile, it isn’t a Shure 58 that you can run over with your car and it still works.

The battery that’s in the microphone itself is very safe. It has a great battery life and can play around 4-5 hours using the highest volume setting in the TF card or “blue mode”. It’s very durable and stable great for those starting to use any type of microphone.

IMO, this truly is an excellent & affordable microphone if you wanted to make some serious noise with your band, doing karaoke, or making a speech. Again, I recommend the pink one!