Introduced in June 2016, the state-of-the-art DDJ-RZX DJ Controller is among the newest additions of its kind on the market, with noteworthy improvements brought to the table in contrast with previous models from other manufacturers. 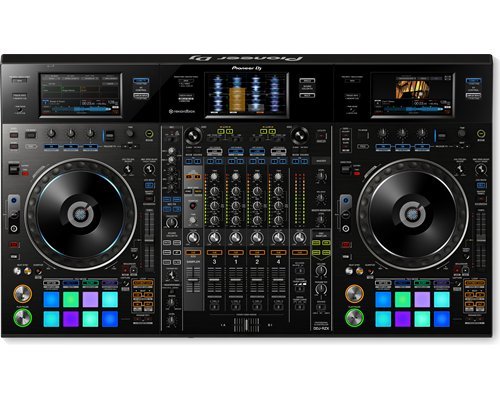 This new bit of DJ gear is specially crafted to work alongside a Rekordbox DJ video pack which allows mixing of videos in the DJ software.

Check out the official demo video from Pioneer on the DDJ-RZX DJ Controller.

Before delving into the key features of this little device, we must make it clear that, unlike the XDJ-RK, the DDJ-RZX comes packed with two USB ports for DJ switchovers and does NOT work without connecting it to a laptop running Rekordbox DJ software.

It is important to keep this aspect in mind before further exploring this impressive device. Although this device cannot really compete with its standalone XDJ-RX predecessor, we believe that it still comes at par with all of the stringent requirements that professional DJs have.

Without further ado, let’s see what makes the brand-new DDJ-RZX a worthy controller for the Rekordbox DJ software.

While this controller’s design is not the most minimalistic one we’ve ever seen, its controls are not the most difficult ones to approach either.

It boasts three 7-inch built-in touch screens which allow you to close your laptop and get intuitive control over audio and video features of the Rekordbox software directly from the hardware. Additionally, the same 7-inch touch screens allow you to:

Furthermore, this little fancy device is a direct heir of some of the CDJ-2000NXS2 and DJM mixer’s such traits as larger jog wheels, eye-catchy multi-colored Performance Pads and, obviously, high-quality sound for an enhanced DJ-ing experience.

To top off the already-abundant features, the comprehensive FX enables you to trigger Mic FX, Combo FX, Sampler Repeat and Release FX for an even more vivid experience.

You just cannot say “DDJ-RZX” without instantly thinking of its invaluable sound. Owing to AC inlets for significantly reduced cable contact resistance and a high-performance 96 KHz/32-bit D/A/ converter made by Asahi Kasei, you can clearly distinguish every nuance of your tracks without any kind of effort on your end.

The all-new Rekordbox DJ Plus Pack adds the unprecedented ability to mix videos to the software, which takes serious aim at Serato and Virtual DJ. According to their own press release, the feature set includes but is not limited to:

Unfortunately, this is not an out-of-the-box benefit. You’ll have to buy a license for only $149 or get instant access instantly if you currently have a license to the software. Either way, you’re going to have to pay for access to the Rekordbox DJ Plus Pack software.

For the software to decently work, you must have the following computer specifications (and better):

• Hard Drive: 250MB or more of free space (not including space for storing music files, etc.)

• Display resolution: Resolution of 1280768 or greater

For the software to work at the highest level possible for an unprecedented DJ-ing experience, we recommend your computer has the following specs (and better)

• Hard Drive: 250MB or more of free space (not including space for storing music files, etc.)

Although this device might disappoint some people out there with its lack of standalone-ness, we believe that it is still a very decent device that works well with the Rekordbox DJ software and comes to par with other devices in the same price range.

The features are also abundant compared to the price you pay, so don’t miss out on the offer while it still lasts!