This goes for guitarists and instrumentalists of all the genres – you NEED to stay in tune.

Look at what happened to poor Slash here!  Playing “School’s Out” on a out of tune electric guitar.  Fire that tech!

Even if you’re playing obscure microtonal music, there are still rules to follow, and failing to keep your tuning and intonation in order will have disastrous results.

And we really take the technology for granted today. We have some pretty cheap tuners in various different forms, either as pedals, clip-ons, and classic pocket tuners.

But back in the old days, not many guitarists had access to precise tuners. In case they didn’t have a decent piano at their disposal, they had to find creative ways to what to tune their instruments up to.

During the 1960s, so-called strobe tuners became popular among professional rock musicians. The same concept is also being used to this day, mostly because it provides the most precise tuning.

However, there are some digital tuners that use the same principle, only applied to digital technology and LCD displays. One of those is the Stomp Classic by a company called Peterson Strobe Tuners. 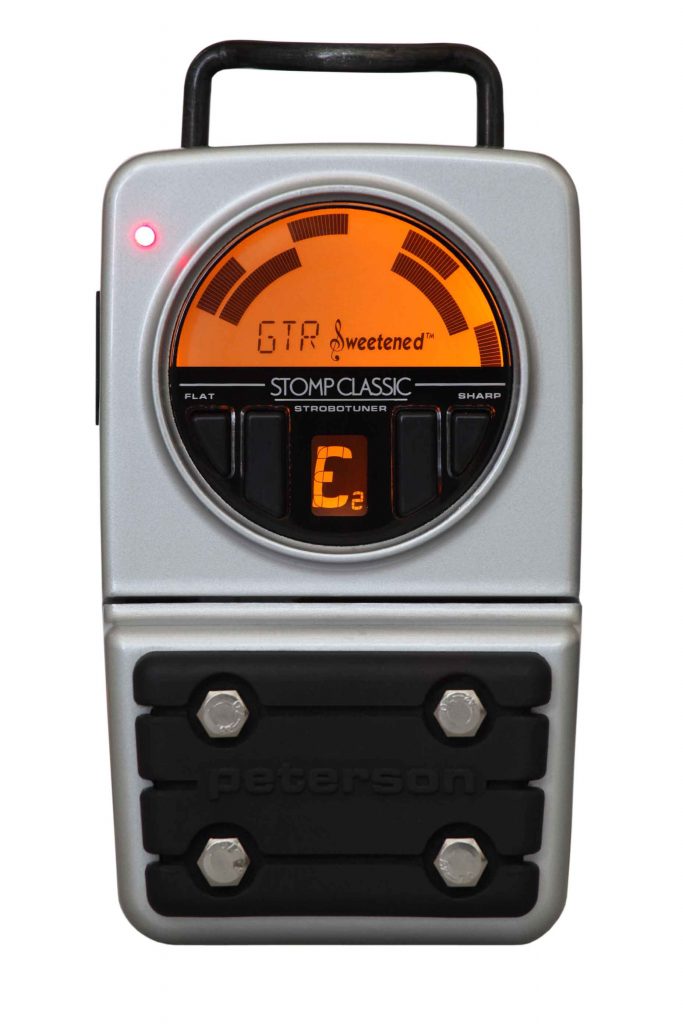 It’s a very interesting professional-grade device that offers really precise tunings. One of these can also be found in the signal chain of the legend himself, ZZ Top’s Billy Gibbons.

Well, if he thinks it’s good, then it must be good. Right? Let’s find out more about it.

To those who are not familiar, strobe tuners have a black and white disk spinning over a strobe light. The flickering of the strobe light corresponds to the frequency of the note being played.

These discs rotate at a different speed, depending on what note you want to tune up to. The strobe light that we mentioned essentially takes a “snapshot” of the disc in the given position.

When the frequency of the open string matches the desired one, you get this optical illusion as if the disc has stopped. It’s a very old method, developed way back in the 1930s, but it’s proven to be the most precise one.

While Peterson’s Stomp Classic is a digital tuner with an LCD display, it relies on this particular method. Instead of the physical disc, it does the same thing on its high-definition display.

First off, it’s enclosed in a vintage-styled and very robust casing that fits on any pedalboard. It basically operates like most of the pedal-based tuners – you just step on it, it mutes the signal, and it shows the name of the note that you’re playing on a separate display, while the main screen shows the “spinning disc.”

Next up, it’s a true bypass pedal, which is somewhat of a surprise for a tuner. In addition, there is a switch that lets you control the signal level in case you have a higher output instrument. There is also a ground lift toggle that can help you deal with unwanted hums.

But aside from being a tuner, Stomp Classic can act as a classic DI box. There is a mode switch with three settings – monitor, true bypass, and the DI. This surely opens up a lot of possibilities both for studio work and live performances.

The main display has a very smooth operation and high-definition quality. It’s kind of like looking at 60fps videos. The display is designed to be visible both in dark and in direct sunlight. This is also thanks to its fairly high contrast.

About the pedal’s construction, it’s pretty safe to say that Stomp Classic is one of the most durable pedals out there. The casing is made from a very thick metal, plastic is of top quality, and all the internal mechanical switching components are pretty sturdy as well.

Overall, when you get a hang of it, it’s a pretty simple unit to use. It also ensures some insanely precise tunings, with the full precision of +/-0.1 cents, which is basically like 1000th of a fret.

The additional features are more than just fluff as this one can also be used for controlling your signal with different modes. The DI box mode is a very useful thing here.

A bit of a downside would be that the small display showing notes is not always useful to some. It’s fairly difficult to see whether the display is showing a flat or a sharp tone.

The contrast and visibility are all great, but the symbols a really small. With all these great features, sturdy vintage-like design, and clear operation, it is definitely a letdown.

Sure, it may not be like the old strobe tuners, but Stomp Classic is way more precise than any other “conventional” digital tuner these days.

You may think of an average tuner as a fairly simple little device, but this one takes it to a whole new level. Testing it out against a few other standard tuner pedals will show you exactly why Stomp Classic is superior to anything else.

However, you should always remember that this is a fairly expensive (about $200) professional-grade piece of equipment.

To be fully honest, you don’t really need it unless you’re a touring pro musician who often performs at broad daylight, has an extremely busy schedule, and doesn’t really have time or patience to deal with unreliable tuners with some minor annoying issues.

Well, it has one issue that we mentioned, the surprisingly small display for sharp and flat symbols. But still, it’s something you can get used to and have a fully functioning piece that can also work as a DI box.

Now, what you want to make of it is up to you. Some may argue that it’s crazy to give $200 for a simple tuner. Others, however, can’t stand even the slightest error in the pitch.