Modern guitar effect signal chains are full of all kinds of pedals. The ones we hear are usually the ones that get the most attention. If you look at your favorite guitar player’s pedalboard, you will probably look for their distortion or maybe their reverb in order to figure out how to replicate their exact tone. However, there are pedals that greatly impact the tone, but which rarely get into the spotlight. When these are used to their fullest potential, you won’t notice anything.

Dimebag Darrell was always in search of that perfect tone. He experimented a lot, and not only with his effects pedals. Swapping pickups was a normal thing for the legendary guitarist of Pantera. With that said, there were some constants in his gear. One of them being MXR’s M109 6-Band EQ pedal. This fairly simple and practical EQ has been around for a while, proving its worth over and over again. Today we are going to take a closer look and see how it can help you find your perfect tone. 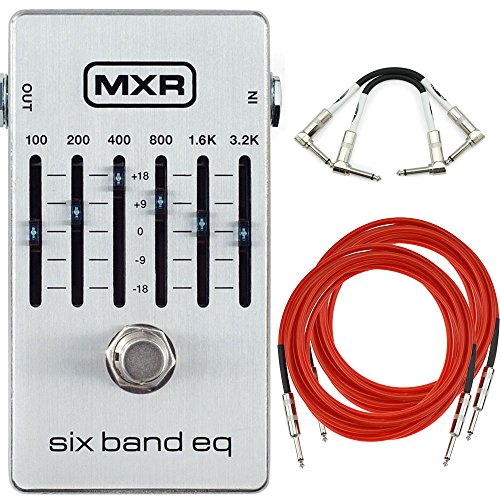 The purpose of an EQ pedal is simple on the surface. It is there to shape up your guitar’s signal in a way transcends the selection of pickups and other components you have. You can boost a certain set of frequencies while cutting down another, which gives you the ultimate control over what comes out the other end of the chain. The most common type of EQ comes in its standard three-band form. You will see a knob for highs, mids, and lows, and that is often quite enough.

However, sometimes there is a need for something a bit more robust. Graphic EQs have been around forever, and their intuitive principle of operation has kept them relevant up until today. As their name states, these have six frequency bands you can manipulate, compared to the standard three. That added versatility is a must have for anyone who needs ultimate control over their tone. Coincidentally, that is what MXR M109 does best.

If you are familiar with MXR pedals, you probably know that they make no fuss about the design of their products. Even though MXR is a part of Dunlop corporation, not much has changed in this regard. MXR M109 has remained the same ever since it first appeared. The enclosure features a standard format in terms of dimensions and is made of a pretty decent quality metal. From a practical point of view, MXR M109 can take any kind of beating and abuse that is common with frequent stage use.

The design of the pedal is pretty much as simple as it gets. The entire thing is painted black with only a few details portrayed in white. The top face is where you will find your graphic EQ along with a footswitch at the base. Just like any other graphic EQ, this one features sliders. There is six of them and they cover a pretty wide range of frequencies. The quality of the sliders themselves is more than decent. Having proper feedback is important when dealing with this type of gear, and MXR M109 offers just that. You can apply the settings you want accurately and quickly, even in low-light environments. This is possible thanks to red LEDs which are installed in each of the six sliders.

Another aspect of an EQ pedal that greatly determines its quality is the amount of boost and cut it offers. In other words, its ability to increase or decrease the level of the signal. For MXR M109, we are looking at 18dB in each direction. You can boost the signal by adding 18dB or attenuate it by shaving off the same amount. That’s a pretty decent range for a pedal in this price range.

EQ pedals are usually defined by their transparency. Before you get to all the tone shaping goodness, you have to be certain that your signal remains unchanged when all the sliders are set to a neutral position. This way you know that there are no hidden changes to your tone, which are then compounded when you start messing with different frequencies. MXR M109 is not completely transparent, but whatever signal altering it does is pretty hard to notice. On the other hand, compared to other pedals in its category, it is by far one of the most transparent.

Once you transcend the standard three-band EQ, things can get complicated fast. It is so easy to get lost while adjusting the tone to a point where you are not sure if you need more or fewer frequencies to play with. MXR M109’s selection of frequency bands is pretty straight forward. They went with one of the more default layouts, which is exactly why this pedal dominates its direct competition. Silent, flexible and practical, it is by far one of the most capable EQs we have available that isn’t too complex.

Many question the value and purpose of a six-band EQ. For them, there isn’t too much of a difference between three and six bands, at least not enough to justify going for the latter. While that might be true in some cases, this MXR has definitely proven its worth many times by now.

Watch this video review of the MXR M109 6 Band EQ by Youtuber Bigboss92.

EQ have become an integral part of any serious pedalboard. With so many different guitar layouts out there, these pedals are more of a necessity than anything else. Finding one that offers a good balance of price and performance is not that easy. MXR is among the few brands which offer something that fits this description and is actually worth investing in.

No matter what genre of music you are into, an EQ is a powerful tool. Dimebag Darrell managed to push this type of pedal to the limit, showing us just what you can actually do even with a six band unit such as this MXR M109. Many have since followed his footsteps, and so should you.