Kirk Hammett is by far one of the most influential guitar players of our time. As such, you can trust his gear choices to be the right ones. When it comes to effects pedals, Kirk is one of those guitarists who have a very fluid setup.

In other words, their search for the optimal setup never really ends. One of the more standard pieces of Kirk’s gear has got to be the MXR EVH117 Flanger.

This pedal is the second iteration of a very famous MXR design, which has been turned into an Eddie Van Halen signature piece. Today we are going to check it out and see whether it can be something you will find useful. 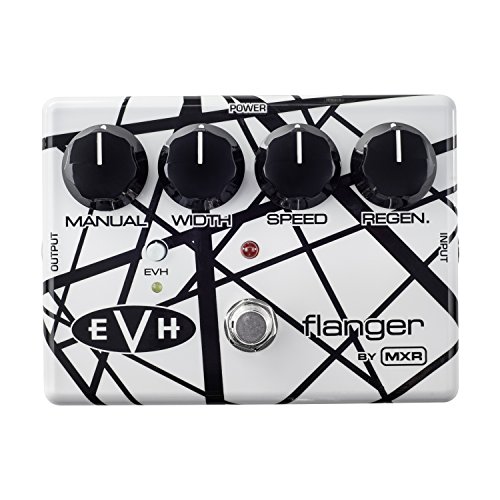 Even though it is used by one of the best, MXR EVH117 exists today because of Eddie Van Halen. That isn’t to say that EVH gets to claim all flangers. Not at all.

He gets to claim this one because the original MXR design is exactly what he used to shape up his tone for both the ‘Unchained’ as well as ‘And The Cradle Will Rock’. Because of that, this particular pedal comes with one EVH specific feature. More on that as we get into the review itself.

MXR is far from being a boutique brand. Especially ever since they became a part of Dunlop corporation. However, MXR did take on the overall design vibe of modern boutique pedals.

In other words, you are looking at a double wide chassis that features a  graphically engaging finish, large knobs and an overall vintage layout. Purely from an aesthetic point of view, MXR MVH117 looks all kinds of good.

One thing that many will argue is much more important than looks is the build quality. The chassis, despite looking great, is also pretty tough. It features thick aluminum build that is no joke. If you were wondering whether or not it could take the beating of everyday use, there is no need to even worry about that.

This bad boy can take whatever abuse you are capable throwing its way and that says a lot about it. Another thing worth mentioning is the overall shape of the pedal in relation to mounting it on a pedalboard.

Even though most modern pedalboards are designed to work best with your standard pedals, most will accept a design such as this one just fine. In other words, the shape isn’t so unique that you might have trouble mounting it. On the contrary, ti is pretty standard.

When it comes to features, EVH117 is very similar to other flangers for the most part. On the inside it is all about the bucket brigade design, very precise electronics and good components.

As most of us are used to by now, the controls are pretty familiar. You have your Manual knob, followed by Width, Speed and Regen. All of these are fairly responsive and precise, allowing you to be quite specific with your tone.

One feature that is quite unique to this pedal is the EVH button. Since this is a signature model, MXR wanted to capture the essence of EVH’s flanger works.

Needless to say, they did a very good job with it. Once you press that button, your tone will gain a very familiar outline that has made EVH a legend he is today.

Be assured that MXR copied the exact flanger settings from Eddie when they designed this feature. You aren’t getting a simulation of his setup. No, you are getting the exact same sound. That’s the type of thing that sets MXR’s flanger from the rest.

Truth be told, that is also one of the reasons why this pedal is priced the way it is.

Aside from Eddie’s signature setting, is MXR EVH117 really that good? Is it worth the extra bucks you are asked to invest? We definitely think that it is. As a matter of fact, this might just be the best overall flanger made in the past 10 or so years.

Our reasoning behind this claim is very straight forward. To start things off, we have to say that it is extremely transparent both when in and out of use. MXR’s bypass is pretty spot on with this model.

In terms of raw sound, it has a very analog feel to it. There is plenty of range in there which is what allows just about anyone to find just about any setting they like.

The precision of the knobs is also something worth mentioning. MXR even included rubber caps which you can slip over the control knobs. What these are for is quite interesting.

They are mean to make it easy to apply changes with your feet. In other words, if you are in a middle of a song an don’t feel like bending over to change your flange, all you have to do is reach with your feet.

Is this even viable? I guess it depends on your dexterity, but it sure beats working with a flange that doesn’t fit or  much worse – not playing in order to fix the pedal.

Overall, MXR EVH117 offers the type of experience a novice and a pro can find useful.

What makes this pedal so amazing is hard to put in one sentence. Sure, it has that EVH sonic profile everyone’s raving about, however it is much more than just that.

The pedal on its own is pretty powerful. When compared even to its direct competition, it comes ahead with a slight edge. In our opinion, if you were to have one flanger until the day you depart this earth, EVH117 is the way to go. It is simple, sounds awesome and packs a mean punch.

On a purely bang for the buck level, it is a solid performer.