The history of overdrives could not be any more confusing. How do you find a pedal that is good with all the market has to offer? Its not an easy thing anymore, and personally I have been feeling a bit let down by most of the pedals that I have been buying lately.

This is mostly because I felt there was no real versatility and I was bound to one sound or because it didn’t sound good with all of my amps. But what if you want something more solid with a bit more variety? The question that remains is: What really makes an good overdrive?

The MXR Custom Badass Modified O.D. overdrive pedal is really different – it’s truly one of a kind and yet not totally freaky.  The first thing that grabbed my attention is how incredibly beautiful this pedal looks. 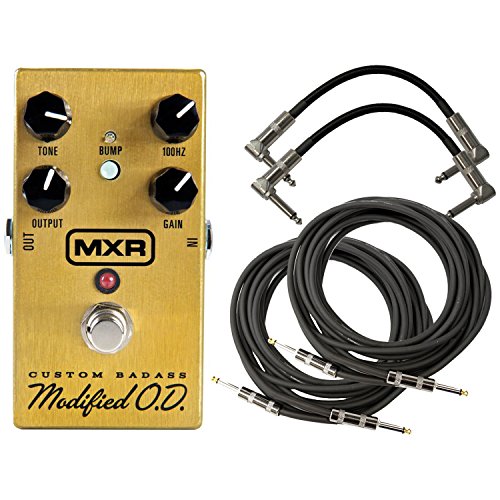 The golden look of the brushed steel looks super amazing and the knobs are not too “light” and don’t really lose the position you set them to which is important if you gig a lot. Countless times I have been annoyed by pedals where the knobs are just so loose that the position of the knob goes off all the time. MXR really knows how to build pedals for people who use it live.  Huge plus.

Originally overdrives are designed to push an already slightly overdriven amp a bit more over the edge and, in that way, you get another gainstage, or to get a softly distorted tone out of an clean amp. Most Marshall/Orange users even just use it to get another texture of overdrive or to play a nice screaming solo that stands out with a tone that cuts through the band like a hot knife through butter. That is to say that there is really nothing wrong as using this pedal as a cleanboost too, and thinning out some of the bass in an overly bass heavy amp.

The volume and gain knobs work really well on this pedal. Careful though, as you will increase the volume a lot if you turn it up this pedal you will push the amp more and that will result in more loudness. But its still cool to annoy the drummer if he’s one of those “always loud” musicians. A Marshall fullstack with a 4×12 might get super loud, to the point where you enter the volume of bands like Dinosaur Jr. – also because you push the mids a lot harder than it’s possible without. If you’ve heard Josh Homme from Queens of the Stone Age, he really is a big fan of those pedals and uses them to get that mid-heavy tone.

The gain is tasty and never sounds bad, and I’ve never found that has it sounded sterile or cheap like many other overdrive pedals, and in fact, it sounds quite transparent and really smooth. And it’s fun to play around with the settings.

Here’s a quick little overview video of the pedal and how it sounds by Jim Dunlop USA.

The tone knob can adjust how much treble and mids you’re getting, but it’s also meant to match the pedal with the amp. It makes sense to dial in a lot more highs in some setups that sound a bit dull, but I’d say don’t overuse this function. Its the only option on the pedal where you can under or certainly overdo it.

The pedal reminds a lot of the original Boss SD-1, in fact I have never used my SD-1 again since I have this pedal, since it has a lot more options and sounds better overall. The bypass is neutral and doesn’t alter your overall tone, another feature that is important to me and many guitar players.

Experimenting with the Badass

The “clean amp” aka Fender/Hiwatt folks use it to get a touch of O.D. when they need it. The TS-9 plus a Twin Reverb is a combination countless people have used and this combination isn’t worse, it’s equally good. You can easily dial in beautiful indie rock tones just like Interpol or the Arctic Monkeys.  For this, just use it before a clean amp, adjust gain a bit lower and add some reverb and you’re in sonic heaven 100%. It sounds good on both types of amps and works also really well with AC15/30s.

If you like to experiment further you can hit the “bump” switch, which allows you to increase the low end and lower mids. People that are into heavy, stoner rock or blues will like this switch as it allows you to get more throaty, deep sounds out of the pedal.  It sounds interesting, but personally I mostly use it without that feature right now. That doesn’t mean that it’s bad. Its still an interesting option for many people, you get a much deeper sound which could be cool for guitars like telecasters or strats.

What I really admire the most about this pedal tho is the 100Hz knnob. While you first kinda didn’t like it at all I find this knob works very well with all kinds of setups and guitars, to get some interesting tones or “stacks”. You can get crazy thin sounds with it, just turn the 100hz down a bit to cut the bass of your amp and get an awesome texture for an outro or intro…imagine there is no bass at all and then the band kicks in – great effect. This effect is also super useful in the studio to get layers of crazy guitar sounds.

You can also stack this pedal really will with big muffs. The 100hz cut is where the magic happens, and you can really give your muff that extra cut-through while you can make it sound leess muddy at the same time with the tone knob. If you even add an EQ pedal after that, well, then you have it all, but for most people this is enough. I also stacked it with my RAT and Big Muff and it works equally well.

The best sound for me with the MXR Custom Badass Modified O.D. is when I use it kind of low gain and add some delay or reverb. The tone is just really, really good. You just have to hear and experience it to understand it.