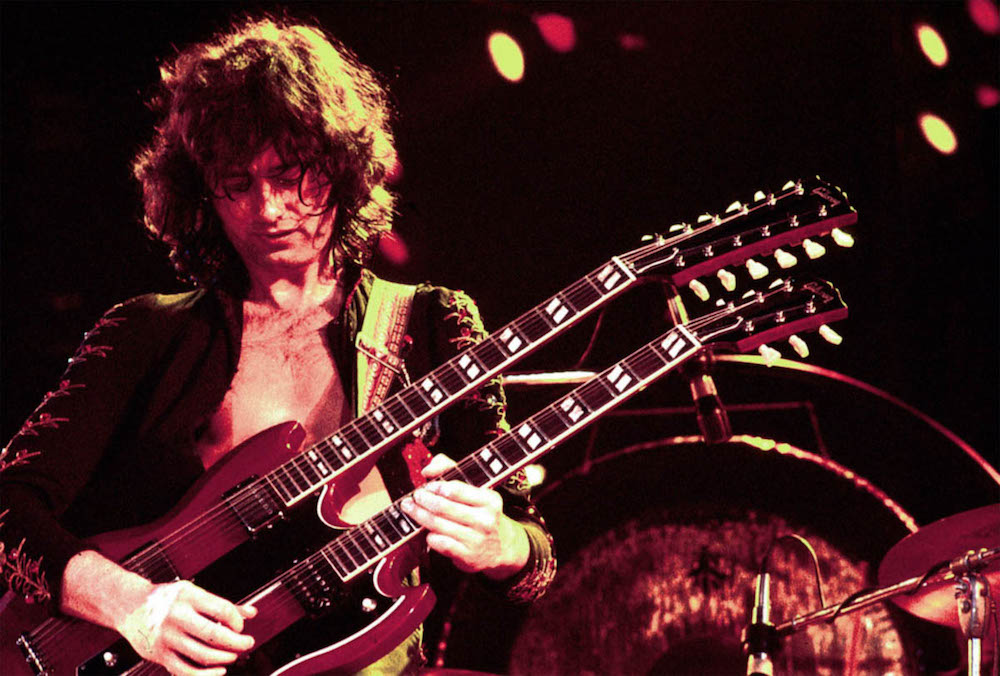 When you walk into a guitar shop, chances are there will be a sign in the area designated for trying out guitars, that says “no Stairway to Heaven” on it.

This might be a silly example, but it’s little things like this that really paint a picture of just how influential Led Zeppelin was, and what kind of impact this band has had on the course of modern rock and metal music and even other genres.

In addition, “Stairway to Heaven” is, indeed, one really overplayed song. But for a good reason – it’s so damn great that it’s just unavoidable in one guitarist’s musical journey.

The way Page played (and still plays) guitar is considered to be revolutionary for the time frame we’re talking about. Even today, you’ll be able to hear his impact in the playing of some younger guys.

He’s a type of guitar player who not only has the technical know-how, but also the impressive creative capacity. His riffs, solos, and licks are among the greatest ever played on electric guitar. And there’s no discussion about this whatsoever.

Our task in this article is to find out what type of gear Jimmy Page used, and how that gear impacted guitar tone and the overall artistic output. We will take the time to look into his guitars, amps and effects pedals.

Hopefully, by the time you are done with this piece, you will have a better understanding of what hardware lies behind Led Zep’s tone. Now let’s take a listen to one of the many, many great Zep tunes, this one from “Physical Graffiti” – the classic “Trampled Under Foot.”

The most important component of every guitarist’s setup are – obviously – their guitars. Jimmy Page has a very distinct taste when it comes to the instruments that he plays. Which is most definitely not a surprise for such a sophisticated and experienced musician who started his career as a session musician.

Most rock music fans will instantly recognize his immense affection for Gibson Les Pauls. That is no surprise considering that his inventory of guitars mostly came down to this model. 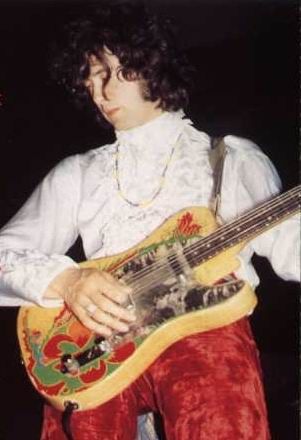 With that said, there is one guitar that is truly special both to Page and to us. It’s his 1959 Les Paul Standard he named “Number One.”

This guitar is followed by two more Les Pauls that are designated as “Number Two” and “Number Three.” However, the first one is still the most notable piece he has.

In essence, it’s a regular 1959 Les Paul Standard, which is pretty special in itself.

Once Page acquired this Les Paul, there were a number of modifications done to it. Most notably, the neck was sanded down for more speed and playing comfort.

Page, a Telecaster man until that moment, took the “Number One” and swapped the tuning machines along with pickups at a later point in time.

All the Les Pauls that were made back in 1959 are still, even to this day, considered as the “holy grail” of the guitar world. It is one Gibson series with such quality that all the other series strived to achieve this level.

Needless to say, these guitars are highly valued and can sell for more than $100,000. 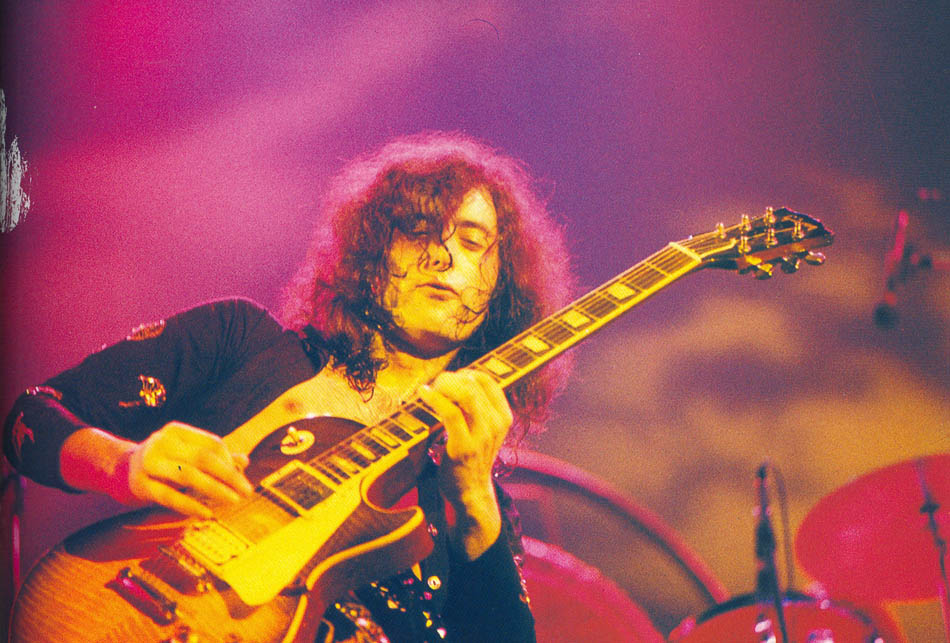 His “Number Two” and “Number Three” were mostly based on this customized Les Paul since Page was so impressed by what the guitar could do.

Aside from these, Page also used some pretty weird guitars. There’s the 1970 Gibson EDS-1275 Doubleneck guitar that he liked to pull out specially for Stairway to Heaven.

This particular model has also been used by countless other guitar heroes over the years and features one neck with 12 strings and the other features the regular 6-string setup.

Arguably the most unusual axe he ever used is the 1967 Vox Phantom XII, which is a 12 String. This thing has the weirdest body shape among all of the Jimmy Page’s guitars throughout his career.

While we’re at some of the weird instruments in his collection, Page also used somewhat of a rare guitar, the Danelectro Longhorn double-neck.

As opposed to the usual setup of double-neck guitars, where one is a 12-string and the other one a 6-string, here we have two 6-string necks. The only difference between the two parts is that the lower one has a longer scale length, serving as a baritone guitar that goes into some lower tunings.

While writing and recording music for some of the 1980s films, like the “Death Wish II,” Page played on a Roland G-707 guitar.

As these were the times of experimentations and innovation in both technology and music, the G-707 is one of those synth guitars from the decade that were all responsible for revolutionizing the music world.

It can essentially be used as a MIDI controller along with a synth processor unit to create various tones, even imitating pianos, strings, and countless other instruments.

But, of course, one should not forget about one more of his legendary guitars, the well-known hand-painted Fender Telecaster. Being a gift from his good friend (and another guitar master) Jeff Beck, the instrument was implemented on Led Zeppelin’s self-titled debut album.

This comes as a surprise to some, not only due to the obvious Les Paul affection that Jimmy Page has but also due to the fact that it’s really unusual to hear a Telecaster sound so heavy. Aside from the debut record, Page used it for some of the band’s earliest tours as well as on the famous groundbreaking solo for “Stairway to Heaven” from the band’s fourth album.

Of course, there have been many other guitars in his collection and we could probably write a series of articles to cover each and every one of them. Bear in mind that these are just some of the most notable ones, along with some oddballs worth mentioning.

In terms of amplification, the hardware list is almost as colorful as it is with his guitars. Naturally, his selection of amps dictated a large portion of his tone, which was nothing unusual back in those days.

One of the first amps he ever used with Led Zeppelin is the Rickenbacker Transonic combo. This is an old piece of gear, a very rare transistor amp coming from the 1960s. If in good condition, some can reach the price of a few thousand dollars if sold today.

This monolithic amp, and one rather unusual unit for today’s standards, was with Page during their first US tour, only to be used for a number of occasions afterward.

Both of these were slightly modified according to his own taste, however, it’s fair to say that he didn’t really change the core of the sound. Rather, his customizations gave these amps an edge of sorts.

Of course, one of his favorite amps has got to be the Marshall SLP-1959 Super Lead. This was an old school Marshall stack that had 100 Watts of power and two channels.

It was one of the first amps to come with an overdrive. He used this configuration extensively throughout 1975 and later on as well.

However, the story goes that Jimmy Page’s Super Lead was modded and that it went up to the power of the very impressive 200 watts.

Maybe this was a bit excessive, but we know that Page is one of the people responsible for developing heavy metal music, so going into some dangerous areas was not unheard of in those early days of the genre. Especially knowing that those old bands competed in loudness on live shows.

When it comes to some less conventional amps, Supro Thunderbolt is the first thing that comes to mind. This was the amp that Led Zeppelin’s first album was recorded on.

In addition, some portions of “Stairway to Heaven” were also recorded using this old amp. So it’s definitely a piece of gear of great historic value. Paired with his Telecaster, he made some game-changing tones with it.

However, there have been some speculations whether this was a Thunderbolt or a Coronado model, but the story goes that the amp was modded and fitted with a 12″ speaker, instead of the standard two 10-inch ones.

Page’s affection for this particular Supro never went away, and it’s something he still likes to use today.

Effects pedals you could find on Jimmy Page’s pedalboard developed from a pretty simple setup in his early days, to a more complex configuration later on.

One of the earliest pedals he ever used was the Maestro FZ-1 Fuzz-Tone. This thing had a pretty raw tone, which definitely went along with Jimmy’s style back in the day. It is also the first-ever commercially produced distortion device in history, also used by the likes of Keith Richards and Billy F. Gibbons.

One particular type of effects pedals Page really loved was the wah. He owned a number of Vox models which could probably represent the evolution of their whole line in chronological order.

The aforementioned Vox Cry Baby model is the one that served as the basis for today’s Dunlop Cry Baby.

Aside from these, you could see a number of different MXR models, including the M101 Phase 90 and a number of Maestro Echoplex pedals.

Speaking of which, his Echoplex EP-3 is something he keeps using to this day. These are, of course, all of those pedals that were produced back in the day.

Jimmy Page, just like most guitar players of that time, relied heavily on their choice of guitars and amps. That was how they formed the core of their tone. Page’s sudden jump from Fender to Gibson is considered to be the pivotal point in his career.

Those Les Paul humbuckers had all the girth and width he wanted, which resulted in some of the most epic riffs known to mankind. If you are interested in achieving a tone similar to his, you should start with the Les Paul Standard.

If possible, make it a 1959 model although those are considered to be a true piece of treasure and are worth a fortune. However, even the new Les Paul will work as long as you get the electronics right.

Maybe you can start out with some of those replicas of vintage pickups, or some solid Gibson or Seymore Duncan pickups if you want to get the tone without spending money on a whole new Gibson guitar. A solid Epiphone LP with a new set of pickups might just do the trick.

Although bearing single-coil pickups, his old Telecaster helped him achieve some pretty heavy tones. All the Fender Teles today do a good job at making some pretty versatile tones. Even getting a cheaper model, like the Mexican Fender Telecaster, will be a good start if you’re the fan of Led Zeppelin’s self-titled debut record.

As for the amps, there are some Marshalls today that can help you replicate the old vintage hard rock tones. Or, a more affordable yet a controversial approach, is to have any kind of digital amp modelling device that does a good imitation of the Marshall Super Lead.

All the guitars and all the pieces of gear that we mentioned above are the ones that helped Jimmy Page shape his tone, ultimately giving a solid basis for the generations of guitar players to further develop their own distinctive rock and heavy metal tones.

But it’s not rare to find people who specifically try to get those exact Jimmy Page tones that we can hear on the old records. If you’re one of them, bear in mind that this will not exactly be the cheapest task. Especially knowing that he used some pretty old vintage amps that are extremely difficult to find today.

Hopefully, this article helped you understand the hardware behind Led Zeppelin’s sound and how Jimmy Page formed managed to achieve his well-known and easily recognizable tone.