The way you record your acoustic guitar with a condenser microphone will depend on a few factors, which I’ll talk about first, and then I’ll get more into the mic’ing techniques themselves.

First – Does Your Acoustic Guitar Actually Sound Any Good To Begin With?

Be honest, do you think your guitar actually sounds any good as it is?  If you think it does, great, but if you’re not sure, you need to assess this pronto prior to recording.

If you know someone who has experience with recording who can honestly say that your guitar sounds good without you having to do anything, that’s helpful.

You’d be amazed how many people think they have a decent sounding guitar but it actually isn’t until they record it that they realize that it sounds terrible, because something is wrong with it.

Having a naturally great-sounding guitar is the first step to having a great sounding recording.

Consider What Kind of Music Are You Recording

Another factor is the kind of music and why you’re capturing that sound for a recording.

If you are hoping to capture a single track of acoustic guitar that will be added to a recording including other instruments, such as electric instruments, you might want a close microphone that picks up the sound without ambience from the room.

Here’s an example of a song I like that incorporates acoustic guitar. You can hear that it fits nicely into the overall sound of the song, which has a string section, and basically a full on rock band rocking out towards the latter half.

This was all probably done with a condenser mic, I’m guessing, due to the amount of detail and clarity you get out of the guitar.

Sometimes, you want that close mic’ed sound.  Other times, you might want the ambience and reverb from the room to inform the music.

The above recording I’d say is somewhere in between.  Capturing all the elements you want might even require – yes, that’s right – TWO mics.  Maybe one condenser, one not.  That’s all well and good, and you can do that too.

Quite often, an acoustic guitar is used as a song’s main rhythm instrument, but not always.

Consider the end product. Are you going to add flute, organ… maybe some stand up bass? Is this song going to have a sitar in it?  What if the sitar and the acoustic guitar are right in the exact same frequency range.

WHAT THEN??  You can’t always neglect thinking about these things, and expect the producer to fix everything later.  That’s just not sensible.

Keep in mind that condenser mics are going to bring out more details in the sound, so that could mean that the frequency ranges in various instruments might clash more, the more detailed the sound is.

I always ask myself, what would Jimmy Page do?

Now you might be wondering why I haven’t specifically talked about placing the mics yet?

Well, there are a number of other considerations I think you need to be aware of first, with another such consideration being sound dispersion through the instrument.

In other words, you should understand how the sound gets dispersed.

The type of acoustic guitar, and the way you play the guitar, will influence the sound as much as how you place the microphone.

What if you’re the producer and this is the guy you’re recording!

The style of the player and the way the sound travels are two things an experienced producer will anticipate, but if you are new to all of this, you might need to think about these things before getting started.

I mean, if you’re a punk and you don’t care how your recording is going to sound when you’re done, feel free to skim ahead. These days, even punk rockers don’t want to have bad-sounding acoustic-based recordings!

It helps to put your instrument’s unique characteristics into perspective when thinking about the recording.

The wood, of course, resonates when you play, your strings are going to vibrate and produce sound, and even the air inside the instrument works in complex ways that can influence the sound out of the sound hole.

Meanwhile, I must emphasize again that condenser mics are more sensitive to everything.

Ask yourself questions like this:  What kind of wood is it?  How big is the guitar?  The soundboard and bridge of the guitar can influence the vibrations, too.

Even the freakin’ pick guard is going to affect the overall sound.  Holy dino-balls.  Ultimately, these things will affect microphone placement and it is worth considering before you start.

Take a look at this weird looking acoustic guitar.

The variance in shape and acoustics of different acoustic instruments means you should take a good look at your own guitar and really listen to where the sound is coming from, in relation to how you play.

Are you a finger picker or do you use a pick?  Is the pick metal or is it plastic?  Is the pick hard or soft?  When you strum, is your hand close to the sound hole or somewhere else?  Overwhelmed yet?  Don’t be.  Just take it slow and be thoughtful.

The sound hole is usually where most people will mic an acoustic guitar, but you might want to capture more than just the sound coming out of that hole – eg. fingers picking, certain sweet spots found elsewhere on the guitar, etc.

Did I mention condenser mics are sensitive yet?

After making sure you have a tuned instrument as well as a solid understanding of the way your acoustic guitar produces sound, you’re ready to think about your condenser microphone placement situation.

Awesome brands I recommend include Rode, Neumann, and Audio-Technica.

One of the things to look out for with condenser mics is that they capture such a wide range of frequencies, that it is easy to have too much of one thing.

That said, there are many great brands of condenser mic out there which can really do what you want and get you the sound you’re after.

Watch out for Feedback!

Because condenser mics are so sensitive, you need to be aware of all your levels, if you are the one recording yourself, and you don’t want your input on your mic to be too high.

Feedback and distortion are not your friends in acoustic recordings, and when you record an acoustic with a condenser mic, it is easy to run into both these things very easily.

With electric guitar, feedback can sound fucking great.  I’m not talking about that kind of feedback.  I’m talking about the kind that will make you go deaf if you’re wearing headphone and potentially ruin your recording.

See these peaks below?  Not good, not good at all!

If you aren’t vigilant (or your producer isn’t), you’ll end up with some gnarly sounds that might require you do a track all over again, or, at least, calls for some editing.

Sometimes, if the inputs are too high, or the guitar is too close to the mic (or both), just touching your guitar can create some crazy-ass feedback, so watch your levels closely.

Check out the mic placement on the image below.  Depending on how the levels are set on the pre-amp, this mic might be too close.

Alternately, it could sound just fine.  Once you’re in the situation below, you’ll find out soon enough what “too close” means.

Microphone Vs. Direct In

Because recording with a mic can be super finicky at times, some producers opt to go with a direct-in approach, since some acoustic guitars have jacks to support feeding into an audio interface directly.

This is really only an option with certain guitars that are designed to do this.  Normal acoustic guitars can’t do this.  Going direct in, we feel, isn’t necessary if you learn how to mic your instrument properly.

That said, here is a video that demonstrates the difference between using a mic to record your acoustic guitar, versus going direct in.  We’ll preface this video by saying that you will lose valuable audio and warmth if you go direct in.

Back to Close Mic’ing

Right, so you can go direct in if your guitar allows for it, but it’s probably better if you don’t, because you get better sound with a mic anyways.

You may well have to do some experimenting with close mic’ing, which entails finding the right microphone as well as the right positioning.

Start by placing the microphone between the fretboard and the sound hole.  Move the mic about a foot away from the guitar.  This is a good place to start.

It’ll capture the vibration of the strings being strummed and when they’re picked, and it’s not going to be too close, while being close enough to test your levels.

In some cases, you’ll want to put the microphone closer – as in just inches away from the sound hole for more bass.

This might call for a mic with a gooseneck, so it can be mounted and moved as needed.

The further away you get from the guitar, the more the mic is going to pick up the room sound and the guitar sound together.

Sometimes this is preferable, depending on the sound you’re after.  In this case, you can test to see exactly how much distance you want to hear in your sound.

If you are in a room with crappy acoustics and zero ambience, distance mic’ing is going to sound bad.  If you’re in a room with a cool natural reverb, you might want a bit of that in your recording.

Like, say, you recorded a song at St. Paul’s Cathedral.  You might want some of that spiritual reverb on your track, right?

As mentioned previously, if you wanted to close mike the guitar, you could place the microphone between the fretboard and the sound hole to capture the bass sounds.

In the video below, you’ll find a demo which is done with a Neumann TLM 102 and 103 to capture the bass without all the deep boominess that will totally mess with your recording.

In this video, the microphone is placed above the sound hole but close to the guitar. It should be angled towards the player’s hand near the hole. That will give you a taste of the bass power without overwhelming the recording with the boom.

As we said near the beginning, there’s nothing wrong with strategically placing a couple different mics to get different sounds. Maybe one at a distance and one close up.

Condenser mics can often be set to pick up just one direction (unidirectional) or multiple (omnidirectional, cardioid), and so this is another consideration you’ll want to think about when mic’ing your acoustic guitar.

It’s hard to say which setting is best, because it depends where your mic is placed, along with distance, etc.  My advice is to play around with the directionality of your mic to see what sounds best. 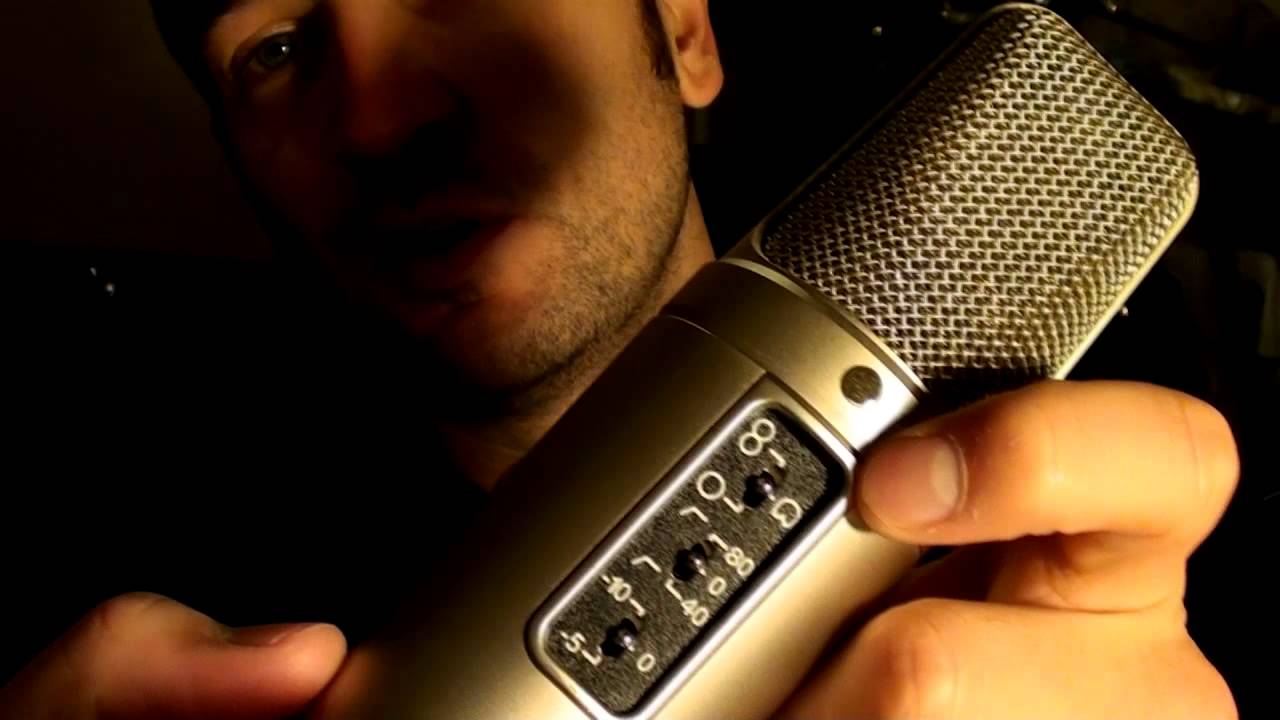 I hope that this article on how to mic an acoustic guitar with a condenser microphone gives you enough things to think about when you’re about to record.

There is definitely a lot to consider, and we wish you luck with your recording!  If you want, drop me a comment and let us know if this article helped you in some way.

Also, feel free to link to your recording. I’d love to hear it!