Kirk Hammett is by far one of the most influential guitar players in today’s music scene. His work in Metallica is partially what allowed this band to reach the heights they reside at now. Fast driving riffs and solo sections full of emotions is what this man is a master of.

Check out “The Ripper” himself below, as he shreds…actually, as he plays a very moody piece of music full of feeling for thousands of fans with impeccable tone.

Early on, Kirk’s clear talent for the guitar didn’t go unnoticed for long by guitar companies who loved what they heard. Ever since Metallica became popular, ESP got interested in working with Kirk Hammett on his own line of signature model guitars. Needless to say, Hammett agreed and the two worked hard to give us the KH series of mighty fine guitars that we have today.

The topic of this piece will be the review of one of his most popular models. ESP KH-2 is the epitome of Kirk Hammett’s design, and his views on what a perfect metal guitar should be like. Everything about this ax is there to produce and support a heavy sound that adds a new layer of awesome to the music you’re playing. As you are about to find out, ESP KH-2 is a real piece of work.

When Kirk was approached by ESP in 1987, the idea was to build several guitars that would bear his name. However, Hammett wasn’t just a pretty face for these new series of guitars. None other than Matt Masciandaro, CEO of ESP, got involved directly with Hammett in order to ensure that the new guitars would truly be on a different level. Their combined efforts spawned a series of KH guitars and today we have over 30 different models offered. The one we are talking about today is arguably the most iconic as Hammett chose to use that exact model as his primary axe for a long time.

One thing that defines a good majority of KH series is the somewhat simple Super Strat body design. The Tonewood of choice for this guitar is Alder, and the finish is either black or white. There are some limited series KH-2 guitars with various graphics on them, but the standard model is a single color design. 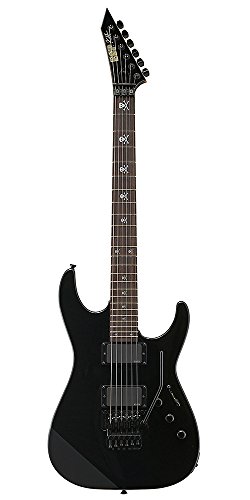 The neck is a maple piece that is bolted on to the body in most cases, although there are versions that sport a neck-thru-body setup. The profile of the neck is a modified thin U, and it comes with a rosewood fretboard. There are 24 Extra Jumbo frets on this piece, while the inlays come in form of skull and crossbones.

Hardware is one of the aspects of this guitar which really tell you it’s a true performer’s tool. You get an original Floyd Rose tremolo bridge with a locking nut and a set of Gotoh tuners on the headstock. All of the hardware is coated with black paint, giving the whole guitar a bit of a sinister appearance.

When it is time to plug this bad boy into an amp, you can look forward to the sound of a proven active pickup setup. One EMG 81 sitting at the bridge position, and one EMG 60 at the neck, are more than enough to give a very fine balance of output and definition. These are controlled by two volume knobs, a tone knob, and a three-way pickup selector switch.

Since the price tag on one of these guitars isn’t really cheap, the performance of this guitar was always subjected to high expectations. Fortunately for us, not only did it meet those expectations, but it surpassed them significantly.

Closer Inspection of the ESP KH-2

When you inspect every element of this guitar, it doesn’t seem all that extraordinary. The design is pretty conservative, and that bolt on neck caused quite a few people to be skeptical of its performance. However, despite the rather regular appearance of ESP KH-2, the way this guitar was designed and balanced allows it to bring a heavy punching tone. Alder body combined with a maple neck deliver a type of natural resonance that is perfect for the music this guitar was designed to play.

When you add a pair of capable EMG active humbuckers on this foundation, you get a very tight low end with clinical highs and saturated mids. Playing rhythm on this ESP gives you a tone that full of girth and confidence, while solos still have that necessary definition and clarity. In many ways, this is a perfect metal guitar no matter which genre you prefer.

In terms of playability, ESP Kirk Hammett Signature KH-2 is just a dream to work with. That thin neck is comfortable and pretty fast, while the somewhat rugged body doesn’t affect the overall dynamics one single bit. Hardware is reliable as it can be. After all, it is an original Floyd Rose. If your playing style includes a lot of whammy bar action, this guitar will keep up with whatever you can throw at it.

In a lot of ways, ESP Kirk Hammett Signature KH-2 nicely encapsulates what Kirk Hammett is all about. He is not the type of guitar player who goes easy on his instruments, and this guitar was made to accommodate such playing style.

The performance it offers can only be described as near perfect. Its tone is on point, and its balanced design allows for levels of comfort you rarely find on similar models. Aesthetics of ESP KH-2 have frequently been under attack. It’s a simple looking guitar, there’s no question about it. In all honesty, a decent part of its appeal comes from its clean look, even though some users would like to have something that is more flashy.

Check out this little review of the KH-2 by Musician’s Friend over on Youtube.

The only real issue with this particular guitar is the price. ESP Kirk Hammett Signature KH-2 is anything but cheap, but such quality comes at an appropriate price. If you are looking for an electric guitar that is designed for and built to play any kind of metal music on a level rarely found on the market, KH-2 is what you need. There is a reason why a lot of guitar players who have one, went out to get at least one more of this awesome guitars.