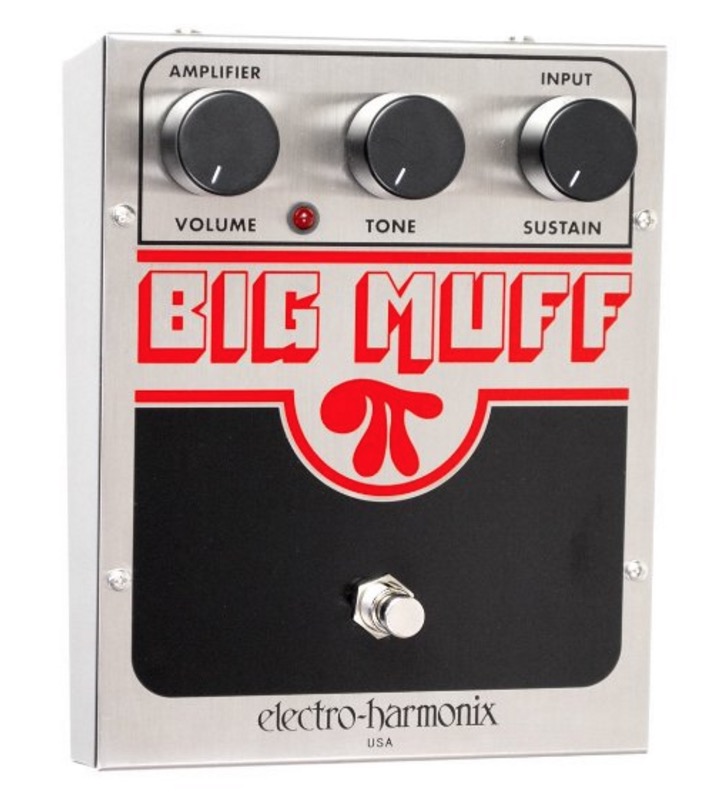 When guitar effects pedals appeared, they completely changed the way we see and use electric guitars. No longer were you limited by the abilities of your amplifier, and were actually free to experiment with your tone in a number of new ways.

One of the first effects that was developed were overdrive and distortion pedals. Up until today, we have seen hundreds of different models hit the market, each offering something different. With that said, there are those who have made a short stint only to fade away into obscurity, but there are also those which became so popular that we still use them today in their original form.

One of the best models that fall into the latter category is the Electro-Harmonix Big Muff Pi. If you want old school, this is the pedal you will definitely want to get. It’s has been tried and tested numerous times by thousands of guitar players around the world.

The Smashing Pumpkins have used the pedal on numerous occasions.

Electro-Harmonix Big Muff Pi was the top choice of names such as Pink Floyd’s David Gilmour and many, many others. Today we are going to take a closer look at this legendary stompbox and show you just why it’s still one of the most popular distortion pedals on the market.

There was, and still is an argument going on whether Electro-Harmonix Big Muff Pi is a distortion pedal or a fuzz pedal. The answer is somewhere in the middle. For the most part, it brings some attributes of your standard fuzz tone, but it’s much more saturated, which brings it closer to the distortion territory.

Features Of The Big Muff

Ever since it was released, some 40 years ago, Electro-Harmonix Big Muff Pi hasn’t changed almost at all. Once you pull it out of the box, you will be greeted by the legendary gray case with Big Muff written on the top panel, along with the Pi character right bellow.

The build quality of this pedal has been put to the test too many times by now, and it has proven that it can take whatever abuse you are capable of dishing out. Electro-Harmonix Big Muff Pi is not your standard stompbox in terms of dimensions. It’s bigger and wider than the usual Boss format we are used to today. 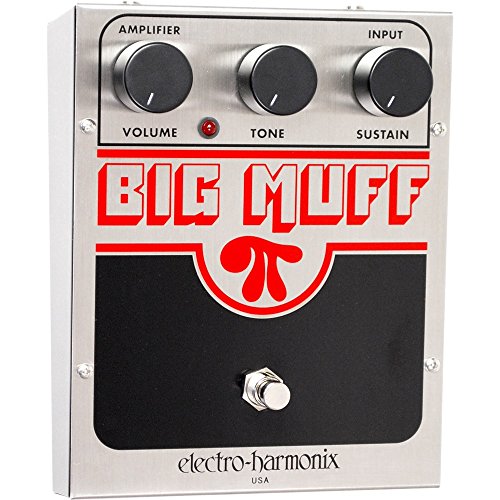 In terms of controls, things are very simple. There are three knobs on the top of the pedal, and a stomp switch at the bottom. The knobs are used to adjust the volume of the pedal, tone, and sustain. Even with such rudimentary controls, you can dial in a variety of tones which you will rarely find elsewhere.

Among other notable features, we have to mention the true bypass. This fairly simple feature is missing on so many pedals that are being made today. Unlike some modern pedals, Electro-Harmonix Big Muff Pi actually delivers real true bypass.

When it comes to powering this thing, your options are pretty standard. You can either pop in a 9V battery or plug it into a 9V adapter. It’s more or less the same as any other pedal out there which needs additional power.

The big muff on the bass is pretty unmistakeable in a song like Hysteria by Muse.

One thing Electro-Harmonix Big Muff Pi is really good at is creating a lot of noise. That is where its fuzz nature comes into play. There is so much gain at your disposal, it’s not even funny. Volume knob does exactly what the name says, and it actually has a lot of range to it.

The tone knob affects the color of the tone, allowing you to either go really bright or really dark. Finally, sustain is where the real craziness hides. This knob allows you to adjust the gain saturation, and boy is there a lot of gain to work with. You can be very subtle with it, adding just enough sustain to get that crunchy distortion, or you can go all out and drown the signal completely.

Here’s an example of big muff-age that doesn’t go too far over the edge.

One great thing about having so much distortion saturation is the fact that solo sections come out really clean while riffs gain a lot of girth. If we had to describe the color of this pedal’s tone in one word, grungy is the first term that comes to mind. From a purely practical standpoint, Electro-Harmonix Big Muff Pi is pretty sensitive.

A small adjustment to any of the knobs, especially the sustain one, will induce a tangible change in your tone. However, that is one if its main benefits. This old timer offers an impressive range of distortion that makes it usable in a variety of music genres.

Whether you are into more relaxed Indie rock, or you want to get that hard rock tone that’s bordering the metal territory, Electro-Harmonix Big Muff Pi has you covered.

Here’s Mudhoney with their classic “Touch Me I’m Sick”, featured on their aptly named Superfuzz Bigmuff album.  Actually, it was added later to the expanded edition, but still…

Just how iconic Electro-Harmonix Big Muff Pi really is can be determined from all of the distortion pedals it has inspired over the years. They say that imitation is the highest form of flattery, which definitely goes along with the reputation this pedal has established over the years. You will find a whole lot of clones on the market, but none of those offer even a similar tone to the good old Big Muff Pi. Actually, it’s a very unique distortion pedal overall.

Because of its nature, the list of popular guitar players who chose to include it into their primary setup is too long to list. You will hear the Electro-Harmonix Big Muff Pi on a lot of legendary albums and singles that have come out in past several decades. One of the best things about this pedal is the fact that it didn’t change.

You can still get the very same distortion effect that your father might have used back in the day. It’s a window back in time, and most of us love it because of that. Compared to other pedals on the market, Electro-Harmonix Big Muff Pi is a bit more expensive, but you just can’t put a price on what this thing has to offer.