First released in the 1960’s the wah-wah pedal has become an integral piece of equipment for any aspiring guitarist. Legends such as Yngwie Malmsteen, Steve Vai, Kirk Hammet and Slash have all utilized the unique sound and tone of this classic piece of gear. Dunlop’s GCB-95 is a fine example of such a pedal, and the subject of today’s review. 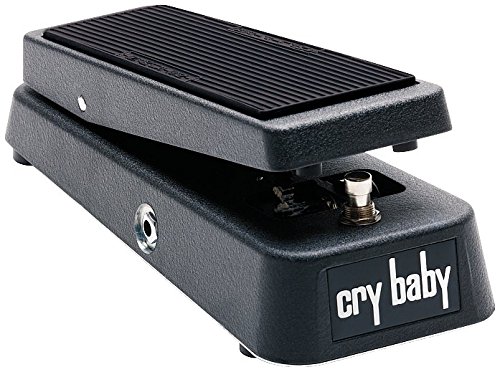 The wah-wah pedal was originally created to emulate the effect of a plunger commonly used by jazz musicians, particularly trumpet players, to alter the sound of their instrument. This technique mimicked the human voice, giving a ‘crying’ effect which worked well with the electric guitar. The GCB-95 is Dunlop’s original cry baby pedal and it certainly encompasses the classic sound of the wah-wah pedal which guitarists have used for decades.

The wah-wah is a versatile pedal and can be used in a number of different musical situations. One such use is to add an extra flavour to a clean guitar; this was often used in disco and funk music in 70’s with The Bee Gees Night Fever being a perfect example of an effective use of the pedal. The wah-wah can also be used with distortion, often during rock guitar solos, the pedal gives an attack to the sound and can also help the solo cut through the mix, one such example of this is during Slash’s solo in Sweet Child o Mine.

Price – The GCB-95 is priced at around £69.99 at most retailers, which is relatively inexpensive for a wah-wah pedal. Considering other models can be priced up to £300, this is ideal for any musician who wants a good quality pedal, but doesn’t want to spend too much money.

Durable and Solid – At 1.7kg the GCB-95 is a pedal that can withstand pretty much any bumps from travelling on the road. Its sturdiness and durability ensures that come gig time your wah-wah will be ready for action.

It’s the original CryBaby! – As the first release in a long line of the Cry Baby series, the GCB-95 is the original model of what grew to be a huge brand. So in addition to being a quality product, the GCB-95 is also a piece of history in regards to the Dunlop pedal range. Also, as music equipment ages it tends to gain value, as the model stops being produced, so owning this pedal could also be seen as an investment of sorts.

Size – The Wah-Wah pedal takes a lot of space on a pedal board, this space could alternatively be used by 3 smaller pedals. This can be an issue for guitarists with limited space on their pedal boards; however I believe the advantages of having this pedal make the extra space required worthwhile.

Basic Design – Since the release of Dunlop’s original design many guitarists have brought out their own models of wah-wah pedal, each having different features and perks compared with the GCB-95. This can make the original wah-wah feel a little dated when compared to the newer models; however it could be argued that since many of these updated versions were influenced directly by the GCB-95, that the authentic sound and feel of this pedal is more than adequate. Ultimately the preference of pedal differs for each player, based on their individual technical needs.

The history and effectiveness of the wah-wah pedal makes it one of the most iconic pedals the world over, and a piece of equipment which all guitarists can find a use for in evolving and perfecting their tone. The Dunlop GCB-95 perfectly exemplifies the unique characteristics of the wah-wah and really is the standard of quality for other pedals to live up to.