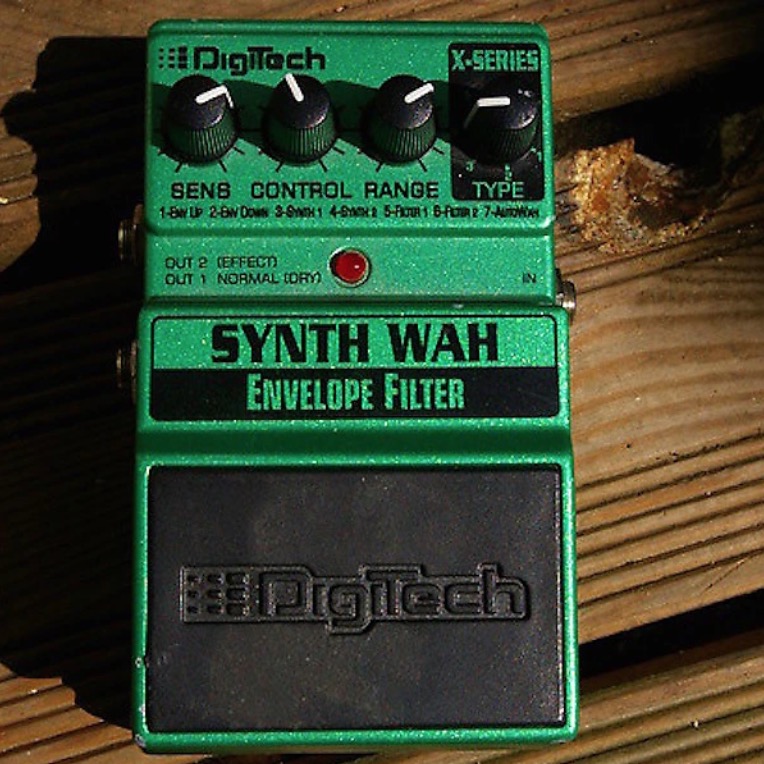 There’s a lot of different stuff that you can find on an average pedalboard these days. Modulation effects, wahs, distortions, overdrives, echoes/delays, reverbs, all put in various different orders to create unique voices for countless guitar players all over the world.

There are, however, certain pedals that are so unique that they create a recognizable voice of their own and are highly valued and respected in the guitar world. We’ve already covered a pedal like Boss AW-3 Dynamic Wah, which gives some exciting twists to a standard wah or auto-wah pedals.

To take things to a whole new level, we’ve decided to cover DigiTech’s X-Series Synth Wah Envelope Filter which is a rather unusual yet very likable pedal used by various famous players over the years, including Korn’s James “Munky” Shaffer and Slipknot’s Jim Root. So here’s a thing or two about this piece of gear.

A standard wah pedal could be described as a filter with the moveable center frequency. This Synth Wah is, in a way, like an auto-wah pedal with a few interesting modes and features on it.

The three main knobs on this pedal are sensitivity, control, and range, while on the right side we have a switch that picks from seven different modes.

These seven modes are envelope up, envelope down, two different types of synth sounds, filter 1 or the company’s “Synth Talk” effect, “Synth Talk” with inverse filter, and the classic auto-wah effect.

The “sens” knob controls the overall sensitivity of all the envelope, synth, and filter mods, while with the auto-wah selected it controls the speed of the sweep.

The control knob has different functions depending on which mode is selected: for envelope effects, it works like the classic wet/dry knob, with synths and filters it controls the attack, while on the auto-wah mod it determines the sweep shape.

The range knob also does different functions depending on the mod: with envelopes on, it tweaks the range, with synth it serves to determine the cutoff frequency, with the filter mods on this knob determines the frequency envelope, and for the auto-wah it controls the wah effect range.

From all these controls and features, you can clearly see that the pedal opens up a whole new world of tone shaping possibilities.

DigiTech’s Synth Wah includes ñ aside from the standard input and output jacks ñ an additional output with the dry and unaffected signal.

The pedal has the standard metal casing typical for many of DigiTech’s famous products. It is well-built and there are no reasons to worry about any damages, even with rough handling. The stomp foot switch has the quality rubber part that allows normal operation in any live situations without any potential slipping.

Being a bit of an older pedal, Synth Wah’s design gives out some of those vintage vibes with its looks. It’s painted dark green and all of the controls are labeled in black writing.

But although we respect the company’s decisions to write down all the mods on the front panel of this unit, it was kind of unnecessary as the writings look kind of messy at first glance.

The LED light though looks pretty well and is a solid indicator that won’t bother your eyes ou in darker settings. Yes, some pedals’ LED light indicators might do that and it’s can be annoying.

Just like we mentioned above in the features section, DigiTech’s Synth Wah is one extraordinary and very versatile piece of gear. You basically get three or four different effect pedals in one standard-size unit.

The pedal often found its use for funky clean tones, those which are often performed with guitars featuring single coil pickups.

The first two modes, envelope up and envelope down, come in handy for these particular situations and you can get a really great “spanking” sound with them.

Although the auto-wah effect is not bad, it’s not a dynamic effect like the one you’d find on Boss AW-3. With the given controls, you can only create the imitation of the rocking of a wah pedal in the desired tempo and with the desired sweep.

But the most interesting features are the Synth 1 and Synth 2 modes. They do add a bit of a distorted sound to it, but the pedal can be additionally boosted with a good overdrive or a distortion pedal of your choice, with some additional tweaking of the knobs.

The Synth 2, in particular, gives some of the old school 8-bit video game vibes if pushed to its limits. Same could be said about the Filter 1 mod.

In conclusion, this is definitely one of the most interesting and best-known products DigiTech has ever put out. But while the pedal is really fun to use, it does require somewhat of an experienced guitar player to get the sound right.

A beginner guitarist might find it somewhat disappointing, as it may sound a bit messy if not tweaked properly or if played without desired groove.

While there are some newer and even more versatile filter and auto wah pedals out there (that also work with external expression pedals), the good old Synth Wah still has a sound of its own that’s not easily replicated.

While maybe not perfect, this pedal is definitely a great addition to your pedalboard if you’re fond of these kinds of effects.