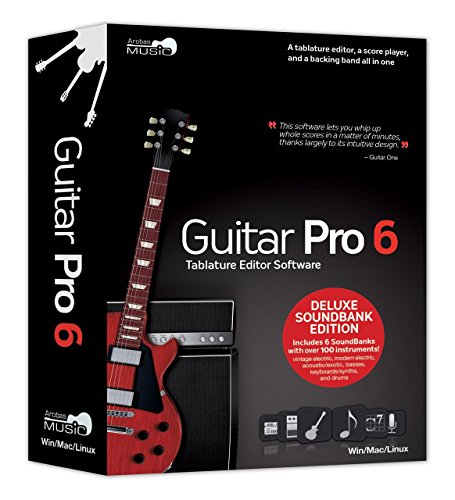 For years guitarists have been searching for the most effective way to learn their favourite songs and improve their technique on their chosen instrument.

The rise of the internet and the popular use of tablature have made it easier for aspiring guitarists to start their musical journey.

Arobas Music’s Guitar Pro 6 takes this a step further, using this tablature in an interactive, fun tool that all guitarists from beginners right up to professionals, can enjoy.

Here’s a quick demo of Guitar Pro 6 to give you a closer look.

One of the defining features of Guitar Pro 6 are the Chord and Scale libraries. The chord library is a helpful tool which shows the user how to play pretty much any chord they would want on the guitar neck, across a number of inversions and positions.

From simple to complex chords; the chord library is a brilliant feature which is equally helpful to both beginner guitarists and more advanced musicians looking to broaden their chordal knowledge.

The scale library acts much in the same way as the chord library however there is an added feature which allows the user to select the notes which they have inserted onto the staff and the ‘select scales from selection’ option will show the user a number of different scales which will work over the given notes.

This is very useful for guitarists who are looking to expand their knowledge on improvisation as well as allowing a greater amount of creativity. The scale library may also help songwriters with limited theoretical knowledge to find new and creative ideas for their compositions.

My Songbook is a program which works alongside Guitar Pro, providing professional standard tablature and sheet music of popular songs. Upon purchasing Guitar Pro 6 users will get a free songbook containing a list of tabs and then additional tracks can be bought.

The songbook is a great way for musicians to learn covers of other songs and generally speeds up the process, this would be perfect for musicians in cover bands who need to learn a lot of songs in a short space of time.

Another feature of Guitar Pro 6 is the tempo changer. This tool allows a section of the track to be slowed down and repeated up to 99 times as slow or as fast as the user wishes.

This is perfect for slowing down faster more complicated guitar lines and slowly perfecting them. The tempo changer works hand in hand with the Songbook and can help users learn specific parts of a song which they may find challenging.

The customization of guitar tones for Guitar Pro 6 is incredible. The sound bank allows for users to modify the sound of the guitar track with specific detail, allowing you to select which guitar and even which pickup you use.

Watch this video to get a closer look at using sound banks with Guitar Pro 6.

For example, for a track with 2 guitars the user could select a Stratocaster on the neck pick up for one guitar and a Les Paul on the bridge pickup for the other.

The program also lets you create your own rig with a broad selection of amps and effects at your disposal.

The range of what you can create using this is huge, with effects such as distortion, delay, chorus and octave pedals to name a few.

Guitar Pro also has a range of pre-made guitar tones ready to be used, many of which are emulating guitarists such as Jimi Hendrix, Joe Satriani and Stevie Ray Vaughn.

As well as the range of guitar tones, other instruments can also be added and altered as you please. Bass, drums, strings and even an orchestra can be added to the score.

The mixer at the bottom of the screen allows these instruments to be EQ’ed, panned and mixed nicely with each other.

Not only does this allow pre existing songs to be recreated accurately but it also allows composers to be more creative, improving their musical pallet and find the sound they are looking for.

This program is perfect for guitarists of all varieties, from beginners looking to learn their first few songs to more experienced guitarists who may wish to share their ideas with band members, to composers looking for a platform to experiment and create their own music.

Although the software may be called Guitar Pro it is also a great tool for other musicians, as the score shows both guitar tablature and standard notation, this is a great tool for musicians of all varieties. Overall Arobas Music’s Guitar Pro 6 is an impressive programme, which can make a musicians life both easier and a lot more fun.